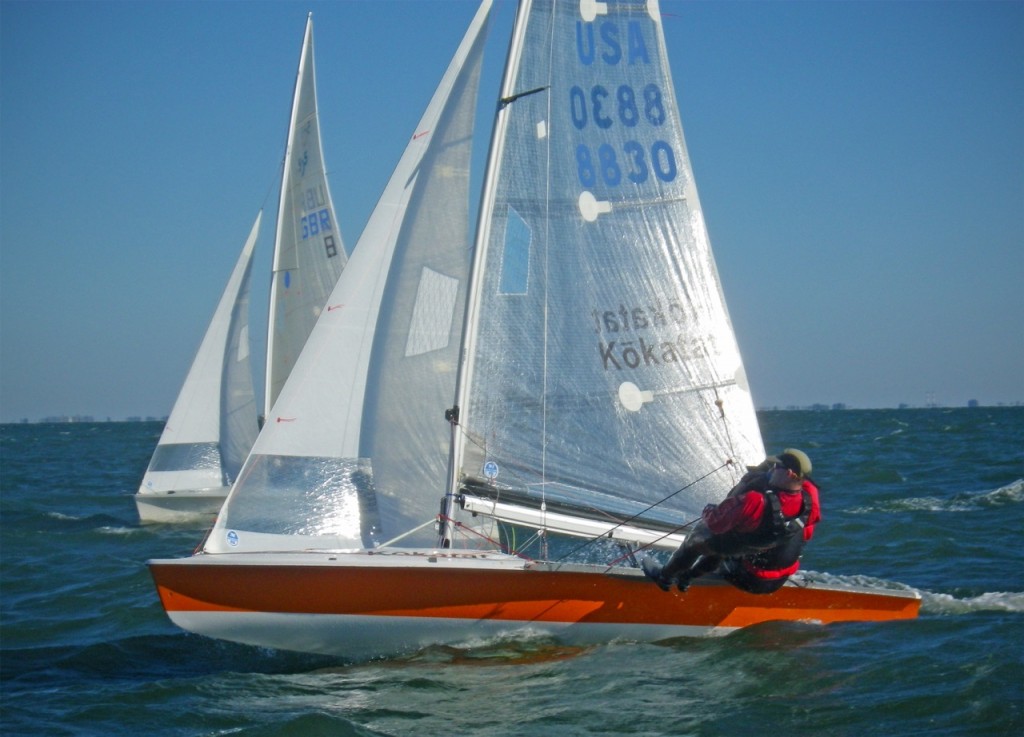 Another 505 Midwinters is done. No breeze and no racing today. After a couple of postponements it was three horns and abandon, and the derigging and packing started. Those driving are some distance up the road by now, others are on planes or waiting for flights at the airport, and more are flying out tomorrow morning. While the event was originally going to be off the beach at Pass a Grille, it was very breezy Wednesday and Thursday, with more breeze in the forecast, so the event was moved to SPSC for ramp launching with docks rather than beach launching in surf. Three 505s from SSA were in a trailer being towed down, but the tow vehicle broke down near the Virginia-North Carolina border. Two of those teams were forced out, but Lauren Schoene and I were able to borrow Zack Marks’ boat for the event, leaving 14 teams in a stacked fleet. This was a very competitive event with all the top teams deep at times.

The fleet included: two world champion skippers (including current world champion), the current world champion crew, several teams with North American Championships (Ethan has won the NAs once a decade for the last four decades), several more with East Coast Championships and Midwinter Championships. Without checking championship results going back 20-30 years we are guessing that over half the fleet were 505 champions from one event or another. Then there was a multiple-time Flying Dutchman North American Champion, Lin Robson; Augie Diaz who wins in Snipes, Stars, and 505s at least and has been a Rolex sailor of the year.

Lauren and I were not getting off the line in the gate starts with the top teams and were very slightly off the pace, but that was enough in a fleet were the top guys were all very fast, and very high. At the back of the fleet it was a little softer, but in most races some of the top teams were back there. Eight races were started Friday and Saturday, but race 5 was thrown out, and race 8 was abandoned when the wind died, leaving six races for the event.

Lauren and I were DNS in one of the six races, as we were working on the boat and launched late, getting to the port limit mark just as the gate time limit expired. We passed one boat but were still DNS for missing the gate. And our best finish was 8th or so in race 6, which was thrown out.

Conditions were mostly light with a bit of medium. Crews were on the wire at times, but were eating their knees much of the time. Runs were mostly sit running, but there was some wire running and some reaching when wind shifts skewed the rhumb lines of the windward/leeward courses.

Other highlights included dinner at the Bixby’s Friday night, SPYC putting on a dinner at Pass a Grille Saturday evening, the usual 505 debriefs, and Lauren and I pulling frogs, lizards and a snake out of Mark’s boat. The snake was pulled out Saturday morning, so had raced with us Friday. The snake had no comments about 505 racing. – Alexander “Ali” Meller.