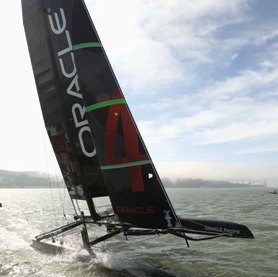 Add Joe Spooner to the pro sailors calling shenanigans on the already-embattled Oracle Team USA’s hiring and firing practices.  From our friends at www.BoatingLaw.com, who do NOT represent the Plaintiff.  You can read the full complaint here.

The America’s Cup AC45 “4 Oracle Team USA” may soon be arrested by the U.S. Marshals at its berth in San Francisco, pursuant to a lawsuit filed in Federal Court by a former crew member against Oracle Racing and the AC45 itself.   Joe Spooner, Oracle Racing’s former grinder and crew for two America’s Cup titles and three Fastnet Race wins, is claiming a seaman’s lien against the vessel for approximately $725,000 in unpaid wages, plus punitive damages, for an alleged wrongful discharge by Team Oracle.

Under maritime law of the United States, the vessel itself can be sued in Federal Court and be arrested by the U.S. Marshals pending the outcome of the suit.

For more information on admiralty and maritime law, click here.   We will keep you updated as this case develops.