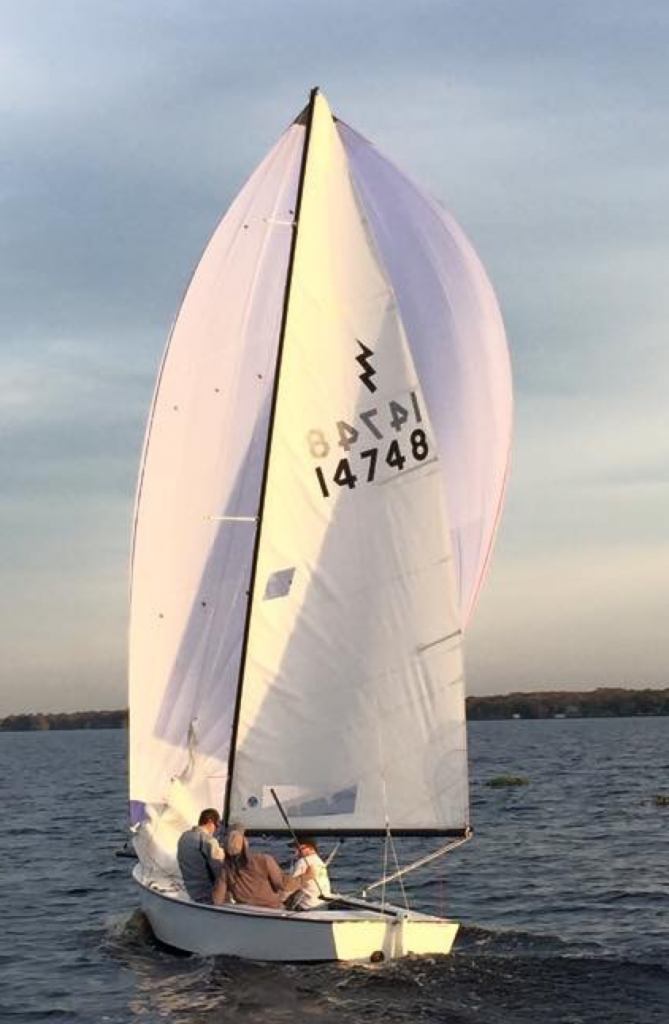 Props to the Bill Faude and the US Lightning Class’s A-Sail experimentation; they Class is trying to determine what its future holds ‘while the class is strong…not when we are in crisis and then react to save ourselves.’

Here’s a report from Faude, posting in the thread on Assymetric Lightnings.

We had fun starting this evaluation this weekend. Overall, the objective is very simple:

Try to figure out if adding some area to the kite and looking at a couple of A-symmetrical alternatives would possibly make sailing the Lightning more fun. That’s what we’re in business to do. Have fun.  Keeping the design contemporary is a big part of that.

The boat weighs 700 pounds. It also planes brilliantly on half its bottom with it’s 76-year-old trendy hard chines. At speed it is solid as a rock, powerful and safe. One interesting challenge we face is that we primarily sail sausages and we most often find ourselves displacing. There are people who have been in the class 5+ years who are in positions to win major events, who have not explored this part of the design. And that’s too bad. Most importantly, there are people we would like to have in our tribe who haven’t see the boat blasting over the top of waves at speed.

So we’re experimenting. We’re beginning to evaluate. Can we make a change that significant? Almost certainly not until enough of our members experience the ride and come off the water grinning that they say, “I gotta have that!” We’re an association of equals. There are a lot of us and we all love the boat. So we’re not going to move until there is plenty of information out there.

There is one neat story to tell though that might be fun. After sailing yesterday, one of our teen-aged members came off the water and went home and edited this video. Please keep in mind that this footage was taken in 11 knots. I’m just speculating here but I doubt that there has been a time in our recent history when a 17-year-old raced home to edit a video because he was PSYCHED about sailing the Lightning downwind in 11 knots. Happy to discuss further. Stand by.

To our fellow beloved square boaters: to quote Aaron Rogers…”Relax.”

This is going to be better, or we’re not going to vote for it.