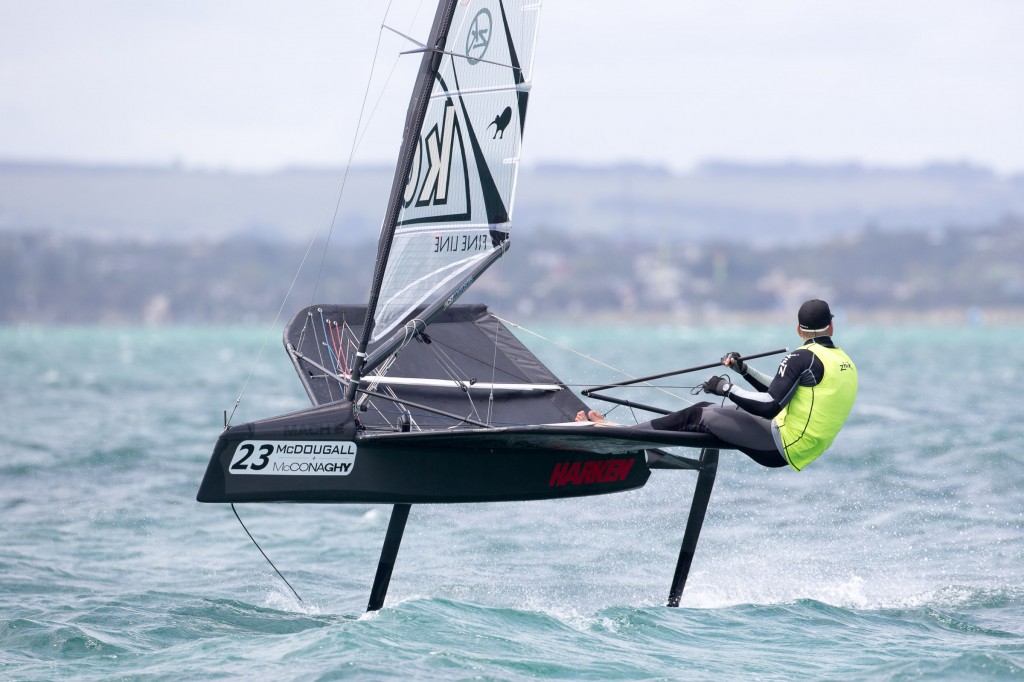 Amid calms, gales, controversy and carnage, the 2015 Moth Worlds has become an easy target for criticism. From a fleet that was arguably too big and star-studded to manage, to a struggling race committee, to weather that refused to cooperate for days on end, to a multi-time world champ getting run down by a CNN media boat, almost everything that could go wrong in this regatta has. None of that seemed to matter after Thursday however, when beautiful Sorrento and Port Phillip Bay twisted up the good stuff for this record-setting fleet with flat water and 25 knots in the sun, allowing the race committee to run four races in the Gold Fleet and three for the Silver Fleet. With just one race sailed during the past three days, day five of the Moth Worlds was a critical juncture for both the organizing club and the sailors alike; those on point solidified a good regatta while those that floundered have watched their championship hopes slip away. As the last remnants of a low moved east across the region on Thursday morning, the rain cleared out almost on cue to allow the fleet to get an early 1100 start, and it was game-on from the get go. Defending Moth world champion Nathan Outteridge and current regatta leader Peter Burling squared off for the first time in this Moth Worlds, hooking up to engage in a long-awaited battle at the front with the young Kiwi crashing ass-over-teakettle on the second downwind leg to relinquish a valuable point to Outteridge as the battle for the world title has taken focus. From there on out it was all Burling however, with the future skipper of Emirates Team New Zealand going lights out with a downhill advantage over everybody to score three straight bullets and stake his defining claim to ownership of this championship regatta. With Moth specialists Josh McKnight and Chris Rashley alongside America’s Cup stars Outteridge, Burling, Draper and Slingsby consistently going head-to-head in 15-25 knots of breeze and full-on flat water boat speed conditions to contest the top five, the incredible competition that we have long anticipated from this regatta has finally begun to materialize in the final two days.

‘Slingers’ broke a foil on the way to the race track to miss the first race but came back to show blistering upwind speed, sailing on his light-air foils, though a DNF in the first race and UFD over-early in the second race saw his chances at a good finish in the worlds slip away. Peter Burling is close to having this Moth Worlds win wrapped up, he needs two decent races and he’s got it. While numerically any one of the top three can grab the win, as long as Burling doesn’t suffer a major gear failure, we can’t see how he’ll lose it. Nathan Outteridge sits in a solid second place, while the final podium position is well and truly up for grabs, with Aussie Josh McKnight battling pommy rivals “the Chrisses” (Draper and Rashley) in an effort to make it a southern-hemi clean sweep of the podium. 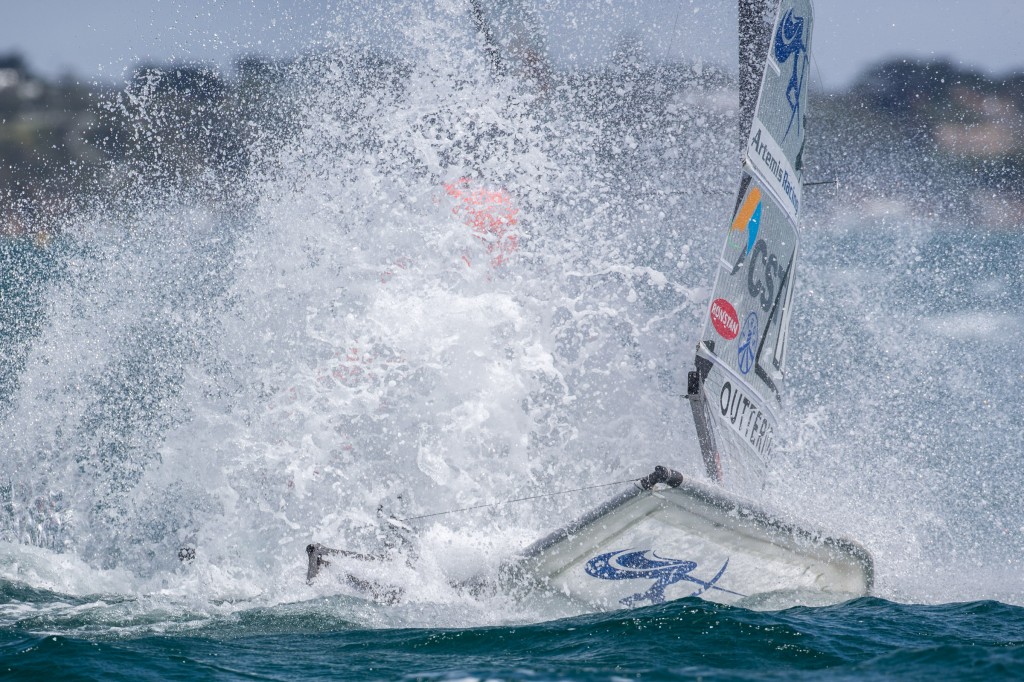 US top gun Bora Gulari was uncharacteristically off the pace Thursday, apparently both shaken up and lacking in boat speed after being run over by Shirley Robertson and the CNN Mainsail bunch, watching his chances at a good worlds fade to black. To add insult to injury, Robertson and her boats’ driver didn’t even agree on their story in the room, with the driver claiming they were filming, and Shirley saying they (conveniently) weren’t. Thanks to the self-serving testimony, Gulari got screwed out of redress, and the international clown court said the crash was partially his fault. Motor boat vs. sailboat…unfuckingbelievable, and we had multiple reports of the same asshats refusing yesterday to help a stricken sailor waving his hands in the international distress signal. Yet another American got completely screwed yesterday; event videographer Beau Outterridge apparently didn’t know how the finish line worked, and he was directly in front of US Class President Matt Knowles as Knowles rolled around the mark to head upwind for his final lap. The whole media thing is shocking; who would ever have thought that it would be Robertson/CNN and young Outerridge wrecking regattas while the SA media boats are the responsible ones.

Top American and perhaps the most over-achieving sailor at this worlds right now is one-design rockstar Anthony Kotoun who is having an incredible regatta to sit in seventh place with a realistic shot at the top five going into the final day. There’s great battles all over the fleet with Mach 2 builder Andrew McDougall leading the Masters division, 17-year old Italian Gian Maria Ferrighi leading a big juniors fleet (his twin brother sits a bit deeper) and local Mothie Samantha England leading a close battle over Irish Olympic radial sailor Annalise Murphy and Japanese Olympic hopeful Wakoko Tabata for top women’s honors. You can check out interviews with all these cats on Facebook or with links in the forum.

What will happen on the last day of the Moth Worlds? The hell if we know, but already, the Silver Fleet has been AP over A’d thanks to the big breeze, and with a major NW’ly running against a fairly big tide, we can guarantee big carnage and the chance of a major gear failure at the top of the fleet, throwing the scoring into mayhem. Will Burling hold on to claim his first Worlds? Will he falter and somehow allow Outteridge an unlikely repeat? Can Bora stage some late-race heroics to move back up the board, passing Kotoun for top US spot after a worlds he’d likely rather forget? It’s Finals Friday, bitches and there’s only once place to be. And you know where you can watch it, right? More awesome photo work from Sander Van der Borch…check his Worlds galleries here.

flight of the condor