Like almost everyone, I hate awards ceremonies, even when I win something.  And since the ceremony for the VOR leg 2 awards in Cape Town was a 3 hour long snoozefest, I purposefully didn’t bring anything dressier than a ripped pair of jeans to Abu Dhabi, figuring it was a convenient excuse to avoid another parade of dignitaries who like to hear themselves speak. But when VOR media boss Jon Bramley told me ‘you’re my guest tonight’, the writing was on the wall, and jeans would have to do.

And boy, am I glad I went, because it was certainly the most dramatic awards ceremony I’ve ever attended, thanks to a crushing, then heartlifting presentation from OBR Brian Carlin, a choked up speech from Nico, and then the bombshell: Team Vestas Wind CEO and CMO of Vestas Group Morten Albæk’s nnouncement that Team Vestas Wind would be rejoining the fleet with a mostly new boat before the finish.   If you’ve been under a rock for a month, get the full story from my interview with skipper Chris Nicholson in Australia a couple weeks ago.

Details remain a little thin until tomorrow’s Vestas presser after the In-Port Race, but we can tell you a few things we found out:

1) The decision was literally made 24 hours ago.  A week ago they were almost sure it was over.

2) Nico has full control over selecting the crew for the rest of the trip.

3) He will take a few weeks to really mull it over.

5)  Lisbon may be too soon, but it’s the target.  Lorient is the backup, where we can be mostly certain to see the new blue boat begin her redemption song.

6) Vestas is 100% committed, as is co-sponsor Powerhouse.  They love this race and feel there is really only one choice for them if they want to send the right message to their employees, customers, and the world.

7) We will be able to follow the ‘race to rejoin the race’ via webcam and through updates, and the team’s sponsors are working on a documentary of the whole affair.  In many ways, this wreck – and the way it was handled – are the best and most important things that have happened to the race since the introduction of the Volvo 70.

Got questions for Team Vestas at the presser? Post ’em in the Resurrection Thread here and we’ll do our best to get them answered, and don’t forget we’ve got a great team bringing you live video coverage of the In-Port Race starting tomorrow at 0950 UTC.  That means an early morning for East Coasters and a late night for you Pacific Time folks.

Go here for some title-inspired redemption of your own, and thanks to GCaptain’s story (via shippingnews and the salvors) for the photo. 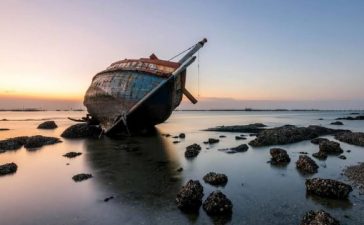