to infiniti and beyond 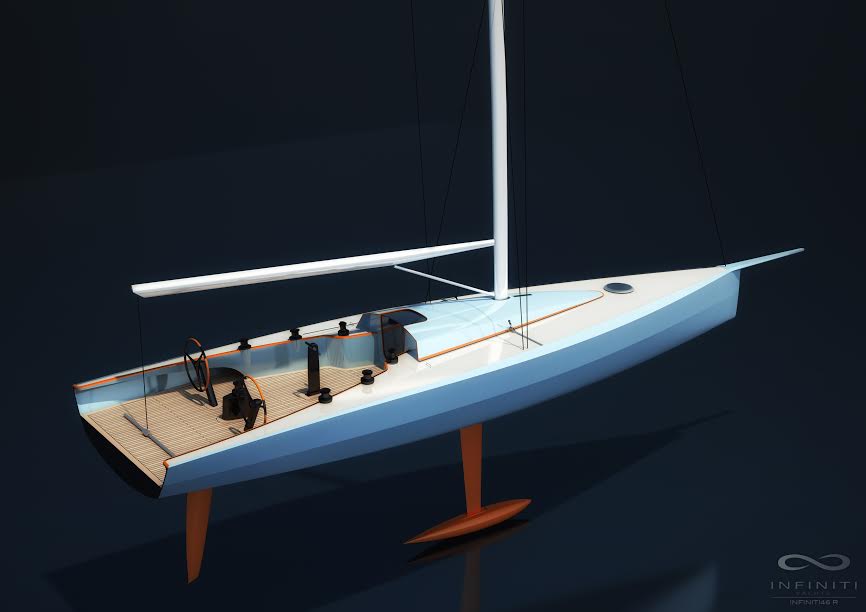 More years ago than I care to remember I wanted a yacht designed that would break the monohull round the word record such as it was, and more importantly set a benchmark time. The only problem was, I did not want a canting keel for such a long and potentially dangerous trip.

This was so long ago that it would have been quite a challenge for a canter to make it around the planet in one piece without stopping – and the boat was to be 100ft – making things a little harder.

So, I spoke to Hugh Welbourn who I had been working with on some projects such as the 80ft BOLS Sport and who was currently designing the 93ft BOLS, and he, like a man selling contraband on a street corner, opened a drawer in his desk and pulled out something rather interesting…….

What Hugh showed me was a concept he had developed for an Open 60 campaign when the campaign was looking for bright ideas… well, it has only taken 15 years to catch on for them but that is another story. Does it work?, I asked – should do, he said. Well then, we should probably find out I said….. and so we did.

The story of how we got from there to Dynamic Stability Systems is a long one, with the odd twist and turn and a modest amount of patience, forbearance and endeavour but it has never been dull!

We started with radio controlled models on wind swept lakes in the wilds of Dartmoor, freezing our arses off in the name of “secrecy”; then we built bigger radio controlled models, then we stuck a foil on one side of a 23ft sports boat in Australia, then into a 40ft boat in Australia, then we built a 27ft scale “model” of the 100ft design that we could actually sail  then we stuck a foil in a 30 fter and then a 38 fter.

From here we built a 25ft DSS sports boat, with DSS as the starting point rather than as a retrofitted addition. From here the Quant guys  got interested and built a 28ft lake racer then a series of Quant 30’s for the Swiss Lakes. Other projects include Speedream and all the way up to Wild Oats fitting a DSS foil and then finally, acceptance in the IMOCA fleet.

Throughout this period we kissed a lot of frogs, not in a nationalistic sense, but in the sense that all the “players” in the industry wanted to be fellow pioneers, but as our Swiss friends say, “everyone wants to be the second first person”. New is not always easy for people to understand……

So, the idea was born to create a yacht that was more mainstream than the über-lake racers of the Quant and yet did not carry the baggage of an existing brand and thinking process. We wanted something fresh, something with DSS at the core of the design, not just bolted on or added as a turbo boost or to address a flaw in the basic design. From this we started Infiniti Yachts.

The first two Infiniti Yachts were the 36 GTs, which was our interpretation of a “Gentleman’s Day Sailor”. It was designed to be sailed around in the light winds of the Mediterranean in the summer and do the odd race perhaps – there was no consideration to rating nor to anyone’s opinion, it was just there to do a job for the client. It was never supposed to be a production boat and take the world by storm, but it was a nice opportunity to show what we could do.

Getting a little technical here, the 36 ft boat is actually about the hardest size of boat to do with DSS, it does not have a great deal of “natural pace” owing to its waterline length, and we could not put racks on it like we could with the Quant Boats, so it had to look “normal” but work – and it works pretty nicely. The longer the boat gets, the more natural pace it has and therefore the easier it is to have the DSS foil working earlier and better – speed is your friend!

The Infiniti 36 is a really nice boat, super quick in the light as it weighs only 2400kg but also quick in a breeze, especially two sail reaching as the videos will show – the nice thing is she sails very flat when she is quick, no more reaching around at 25 degrees of heel, and the videos pretty much tell all the story. We learnt a great deal from sailing the boats and we sailed them in all sorts of weather, up to 50 knots of wind a few times (not by choice) and there was even talk of sailing one across the Atlantic but the owner changed his plans.

So, now Infiniti Yachts is embarking on a new build, the Infiniti 46 R which is the first in a series build of a 46ft racing yacht, and early in the new year we will be putting out the details here, the story behind the boat, and how we go about designing and detailing the boat. Hopefully giving a greater insight into the processes we go through and answering a few questions on the forums.

Here are a couple of preliminary renders of the boat, not quite final, but not far off.

ya gotta have faith