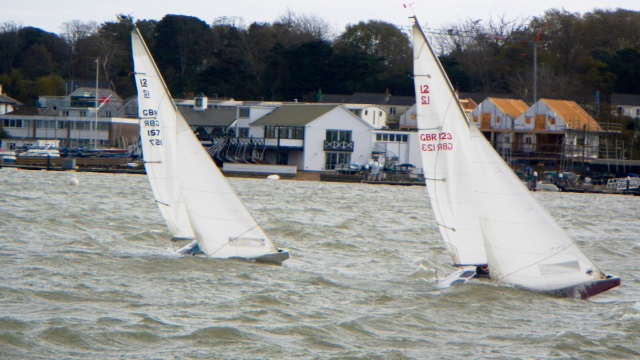 The second of the 2014 – 2015 season’s Illusion Regattas took place at Bembridge over the weekend. The race report reads as follows:

Saturday’s racing for this year’s Illusion Guy Fawkes Trophy at Bembridge was almost “ridiculous” in the F 5-6 gusting F7 Southerly winds, and on Sunday conditions were almost “sublime” with a F1-3 South/South Westerly!

With racing very definitely restricted to the harbour, eight boats braved the very breezy conditions on Saturday. The second race went Mark’s way with his wife Jo having a great race coming in second and Julia Bailey third ahead of Graham who had at one time been almost at the back of the fleet. In the final race of the day, with both Graham & Raymond deciding enough was enough & retiring, the way was left for Mark to notch up his second win of the day; Julia survived and came in second and Jo was third. After retiring in the two earlier races, it was good to see Alastair Speare-Cole finishing in fourth.

A flat RIB battery, a stuck crane, two minutes silence at 11:00 and no wind lead to Sunday’s start being postponed for just over half an hour. However, patience paid off for the increased fleet of twelve Illusions and although never above about 8 knots and very shifty, there was some close racing in the calm conditions off Silver Beach. In the final race and with the breeze backing southerly as it progressed, it was James Meaning’s turn to show everyone a clean pair of heels. Bruce & Mark were a very close second and third with Andy Christie in a very creditable fourth.

Overall results (with a discard):