Solo Figarists Nick Cherry and Henry Bomby continue with Sailing Anarchy’s 2014 Route Du Rhum coverage, sponsored by Bruce Schwab Energy Systems. Please get in touch with the Vendee veteran to find out how his energy storage, solar power, and charging systems can benefit your cruising or racing boat today, and enjoy Nick and Henry’s latest analysis.  Hit the thread for all the latest news, photos, videos, and analysis.

Big conditions meant a premature end to the huge ‘thank f*** they’re gone’ party for Route Du Rhum shore crew and race staff in St. Malo on Sunday night, just as it has for some 13 official abandonments on the race track.  A further 20-odd boats are in less-dire-but-still-bad shape, headed to port or to find some shelter in order to fix damaged sails, rudders, and bodies.  Obviously the weather has been heinous, with two solid fronts kicking the fleets in the face with gusts reported up to 60 knots and some nasty seas, especially rounding the corner at Brest. The most high-profile casualty has been Thomas Coville, who managed to prang a cargo ship in the night just in front of the TSS off Ushant. With closing speeds between the ship and trimaran of 40 knots, dark skies, and awful visibility, it’s a wonder that more of these guys haven’t hit anything. It’s yet another blow for the Sodeb’o campaign, which adds this failed attempt to something of a pile of them over the past few years.  Coville may be one of the world’s best, but we wonder if he didn’t piss off an old gypsy woman sometime over the past decade…

Perhaps most worrying amongst the early dropouts are two keel losses/failures on the new Sabrosa Mk II Class 40 sisterships of Francois Anglouvant (picked up by a chopper from his capsized hull) and Marc Lepesqueux, who managed to fill ballast, drop sails and sail downwind to Guernsey. I’m no mathematician but the chances of both these guys hitting a submerged object seems pretty low, and we guess their design and build team (which included Anglouvant) is trying to figure out what happened right now, while thanking their lucky stars that no one was killed.

The decision by race director Gilles Chiorri to send the fleet off into this storm is refreshing in the light of so many big races being delayed in recent years. Many skippers – particularly in the handicap Rhum class –  chose to do something we rarely see these days; they waited out the worst of the storm before going yachting.

All the fleets have spread out by now, but none more so than the Ultimes, where Loic Peyron is having an absolute blinder aboard BPVII, steadily pulling out a sixty mile lead over Yann Guichard on the Spindrift (who isn’t showing any signs of using his extra nine meters of length to catch up). Watching these guys go off the start was jaw dropping, with Coville looking picture perfect early on and Sydney Gavignet giving the spec fleet some ‘oohs’ and ‘aahs’ flying his center hull as he weaved through the spectator boats.   We caught up with Sidney here; click the link for a video interview where we chatted about ‘Oh, Sheet’ release systems and weather routing. 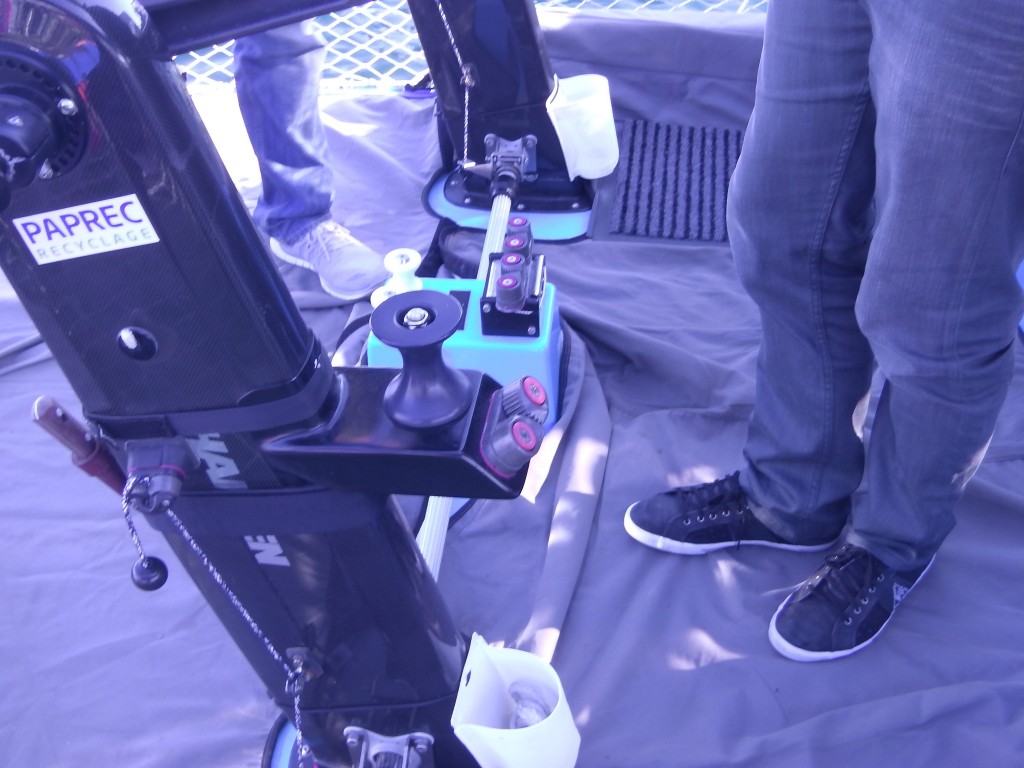 Given that sailing a big multi alone is a full-time job, these guys are aiming not to go downstairs at all during the race. Yann Ellies on Paprec has a staff of three top guys holed up in a house in Brittany running a watch system looking at forecasts and on-board data basically playing a full-on version of the virtual race game. He’s planning to have Skype messenger on 24/7 and regular sat phone calls, leaving him free to ease sheets off one of these bollard/cleat arrangements at any time. Whatever you think of shore-based routers they are here to stay, and this race pits the best weather guys against each other across the Ultime fleet.

Francois Gabart is, once again, showing why no one has been able to touch him for the past couple of years; 30 miles over Jeremie Beyou in a sistership and 50 over Marc Guillemot aboard Safran. Vincent Riou and Tanguy De Lamotte are all but out of this race with mainsail track issues and rudder damage respectively. These guys are in for a fast crossing with few passing lanes; look for Gabart to continue to push his lead right through the finish line.

True to form over the last couple of years, Seb Rogues in GDF Suez is leading the way as the 40s reach down towards Cap Finisterre. There’s been a definite split in this class, with the first fifteen or so boats who made it out of the channel in good shape having put some serious miles on the B fleet of stragglers as they get into better and better breeze.

The prize for most dropouts goes to the Multi 50 fleet, where currently only six out of eleven starters are left in the running, with the three favourites occupying the top spots. On the dock some of these boats looked like they might be better off in a museum than a storm and it seems that maybe Neptune agreed!?

Looking ahead at the weather, things are starting to calm down for the big trimarans and IMOCA fleet, and with the Azores high still located quite far north, these skippers should be able to sail a fairly direct route for the next few days before the wind drops a little and goes further aft.  Then it’ll be lots of gybing to line up their approach to Guadeloupe.  The slower boats will have to negotiate another (hopefully less violent) front toward the end of the week, which could create some lanes for some of the early losers.  We’ll keep you posted.

the industry ate itself