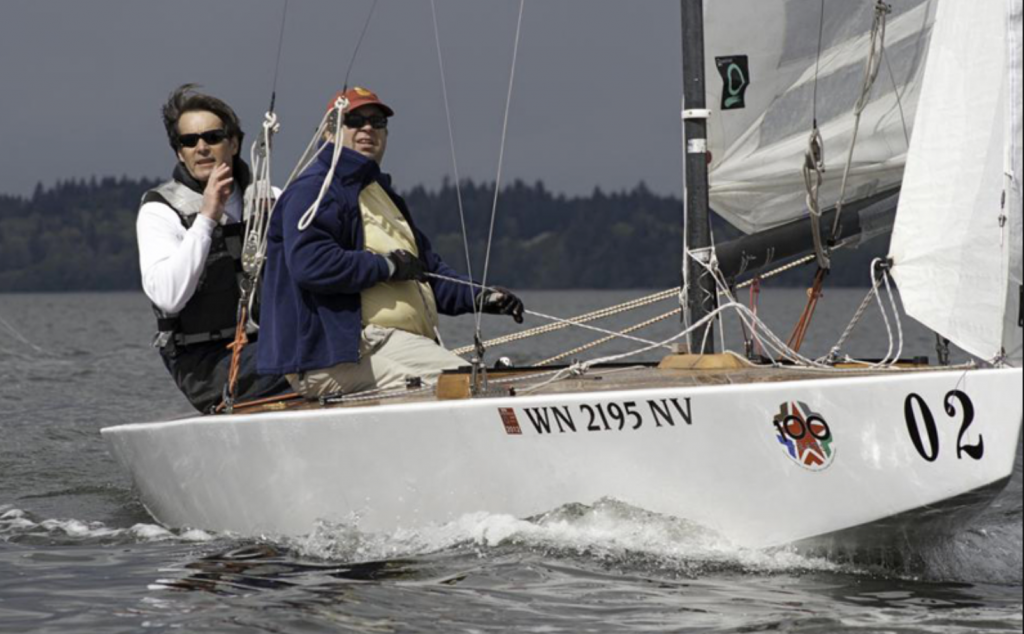 The Puget Sound racing community continues to drift along in shock at the loss of affable and experienced 46-year old Star sailor Jay Berglund (and the sinking of the Harmony 22 Gizmo, the boat he was on) during a race this weekend in the South Puget Sound.  Three Sheets NW has a touching feature on Berglund, the thread has plenty of stories about him, and we encourage you to add your own memorial thoughts.  For those looking to know what really happened, here’s a brave, honest, and detailed account from skipper and boat owner John Thompson.  Props.  Photo of Thompson and Berglund (crew) from Thera Black.

I was the skipper of Gizmo when she was lost this past Saturday.  I was sailing with Jay Berglund and Peter Crossman.  All of us have a full lifetime of experience sailing and racing.  We are all in mourning right now for Jay.  He was one of my dearest friends, and he loved little Gizmo easily as much as I did.  Harmony 22s are phenomenal little boats, especially in light air.  Jay was an experienced open ocean sailor and racer.  He had his USCG Captains License, SOLAS credentials and all that.  He has sailed all sorts of boats from Thistles and Stars up to his current ride on Artemis (a 50ish foot racing yacht out of Shilshole).  He’s been my right hand man on Gizmo since I bought her in 2012.

This account of what happened is mostly my own obeservations, with a bit of second hand info to fill in the gaps.

Gizmo was participating in the South Sound Sailing Society Eagle Island Race when she was lost.  We had completed about 25 miles of the 27 mile course.  The weather forecast had called for high winds that day, but after 8:00pm and through Sunday.  We were planning on being done long before then.  As we passed Boston Harbor with the working jib up and full main in about 15 knots of wind, we could see the heavy white caps ahead in Budd Inlet.  So we cleared the 150% off the foredeck and reefed the main before getting there.  We quickly took in a second reef as the winds built to 30 knots steady with gusts probably to 35ish.  In this configuration, I was just flogging the main, so we eventually decided to douse the main completely.  With the dagger board so far forward on these boats, she actually sails OK this way.

We sailed two long boards back and forth across Budd Inlet keeping the boat at close to hull speed all the way despite the waves.  We were still racing at this point and just looking forward to reaching the finish line so we could douse the sail.  But on the third board, the waves built to 6-8′ making controlling the boat and holding her nose on the wind without the main very difficult.  Halfway across the bay, the forehatch blew open creating an instant safety situation.  At that point, both Peter and I reached the conclusion that we were in over our heads and decided to abandon the race.  But before we could act, a gust measured at over 60 knots swatted her over.  It happened so fast that there was no recovering from it.  Harmony 22s have bilge ballast rather than a ballasted keel, so when they go beyond 90 degrees, they turtle immediately.  And this is what happened.

I was actually under the boat in the cockpit when it came down on me.  I had to swim down under her to get free.  Jay and Peter rode the rail over and were free in the water when I emerged.  We swam to the transom together so I could reach the VHF radio and call for help, but Jay said it was gone.  I was still thinking that the boat would right itself, and she would have had she had bouyancy bags installed. Jay stayed with the boat.  Thats what they always tell you to do in a situation like this.  about 2-3 feet of the stern was sticking out of the water.  Unfortunately, he wasn’t wearing his life jacket.  Jay always wears a life jacket.  I can’t for the life of me figure out why the one time he didn’t wear a life jacket, that when the shit hit the fan.  I also wasn’t wearing a life jacket, which turned out maybe to be a blessing since I had to swim out from under the boat when it came down on top of me.  I found the foam rudder floating free, so I used that to keep me up.  Peter had his life jacket on and Jay was clinging to the boat.

Peter and I were quickly washed away from Gizmo and Jay.  Four sailboats converged on the scene to assist within minutes.  The first was a single-handed San Juan 24 with a roller furled jib that would not roll up all the way in the heavy wind so he was barely in control.  He tried to pick up Peter, but didn’t have any way of getting him aboard so Peter finally gave up and waited for another boat.  The next boat in was a S2 7.9 that was also barely under control with a full main up that couldn’t be reefed.  The winds were still blowing over 40 knots with higher gusts.  I swam over to her, grabbed the backstay and hoisted myself aboard over the transom.  Somehow I ended up in control of the boat (maybe just because I was in the back of the boat and in the way I guess), so I steered over to try to pick up Peter and Jay. Gizmo was gone by this time. My intent was to park the boat to windward and drift down on them, but with the full main up and 40+ knots of wind thats no easy task.  I drifted past twice out of reach.  At that point, I noticed an Express 37 coming in under power already deploying their lifesling, so we were just in the way.  The Express picked up Peter after a couple of passes.

At this point Jay was face down in the water and non responsive.  The rescue boats were converging on the scene at that point, so they directed them to where they last saw Jay.  I think he had sunk by that point, because it was exactly 24 hours later before he was found a long way from the scene of the sinking. My thoughts and prayers go out to Jay’s wife Ruth.  Jay was a great guy and a great sailor.  He was very focused on his sailing.  When he trimmed the sails, they rarely ever got cleated.  He was constantly paying atttention to the boat trim and sail shape.  I’ve never met someone so focused.  He loved Gizmo as much as I do.  If I can raise her, it will be in his honor.

NOTE: There will be a celebration of life for Jay on Sunday at 1pm.  Out of respect for the family, it will be a dry event.  The event will be held at the Everett Yacht Club (404 14th Street Everett, WA 98201). In lieu of flowers, donations may be made to the Olympia Yacht Club Foundation for the Junior Sailors program or to Save Our Wild Salmon. Cards can be mailed to: Ruth Elder c/o Hope Elder, 30105 2nd Place SW, Federal Way WA 98023. Email to [email protected]

out to sea you go