view from the front 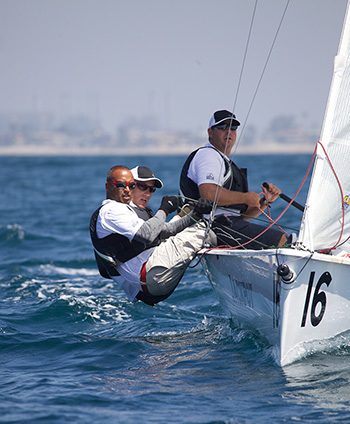 We’ve already featured a story or two from the Viper 640 North Americans, but we found an even better one in our junk mail from newly minted NA Champ Chad Corning.  Corning got plenty of Viper experience while sailing aboard Jason Caroll’s Argo, and he stepped in on bow last month with Canadians Brad Boston and Curtis Florence for the SoCal NAs.  Here’s his report, and be sure to check on the excellent Snake Bytes class newsletter for more Viper developments.

Primo conditions and great hospitality at Alamitos Bay Yacht Club made the 2014 Viper North Americas an awesome event. It was a marathon –4 days and 14 races with plenty of breeze.

There was great mix of very competitive boats from the east coast, Texas, Canada and SoCal making up the 34-boat field. I had the pleasure of sailing on board Jackpot with three-time NA champ and Olympian Brad Boston driving and the incomparable Curtis Florence tending to the front of the boat. Though conditions had been unseasonably light in the runup to the event, the regatta was classic Long Beach with excellent thermal breeze in force for all of the race days.

Day one was sailed inside the breakwater in fairly flat water with building breeze all day. Santa Barbara based Jeff Grange sailing with Tedd White and Chris Parker won all four races on the day to take a commanding early lead. Almost as impressive as the score line was the way Parker and Team Venom sailed – never tacking on anyone, always going fast the right way, just smooth and settled all the way around the course.

Day two was sailed outside the breakwater and started out light enough for a short AP before the marine layer shot offshore and the breeze built. The pecking order was becoming a bit established with the local team of Kevin Taugher, Mike Pentecost and Chuck Tripp on Hot Mess and ourselves putting in fairly consistent results along with team Venom. Big breeze and waves toward the end of the day provided a pretty stern test just to get the boat upwind but the reward was sweet, with fully-hiked planing conditions on the runs.

Day three was back inside, and clear morning skies allowed the breeze to pump early, making the four-race day a long one. Local Jay Golison with Steve Flam and Mike Bradley put their bad first day behind them and dominated with an impressive 2,1,1,1. On Jackpot we were having a fairly consistent event with mostly top 3’s (which would make for a winner in most events) but Venom, Hot Mess and Golison were so consistently at the top, especially as the breeze built, that it was difficult to make any progress on the scoreboard.

Going into the final day we sat tied in second with Hot Mess, with Team Venom four points clear. We had a relaxed vibe on Jackpot but were very focused on making a run. All went according to plan in race 12 as we started at the boat and worked the favored right side to take the win. The points situation became pretty favorable to us as all of our rivals started down the line a bit and struggled to get across to the pressure and shift on the right edge of the beat. Race 13 was a bit hairy as we were buried at the start, which thankfully saw a general recall. We popped off the line nicely on the next attempt and executed the same game plan as race 12 to notch another win. Nothing was certain going into the final race as ourselves, Golison, Hot Mess and Venom had (another) epic battle around the course. Hot Mess took the final race to secure second by a point over Venom. Our third was enough to comfortably take the title. Beyond the podium, the level of sailing was very high and all the teams put in stellar individual race performances.

These are good times for the Viper class with excellent racing on offer and strong fleet growth in the US and internationally. The party moves to Miami for the winter and a record fleet will likely assemble for the 9th North American Championship next fall.  For full results, go here, and for a photo gallery, here.

not the end of the world