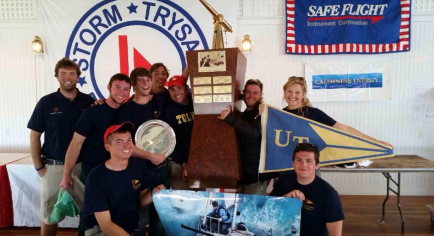 The University of Toledo sailing team consisted of eight students, team members were; Garrett Altenberger, Drew Blackburn, Evon DePrey, Deborah Dollard, Luke Gossman, Hans Guentert, Andrew Logan and Colin Mackay. The UT Sailing Club team was sailing for the first time ever in this event. They competed in the PHRF Division scoring 1,1,1,2,2 in five races held over two days, winning their class and being awarded the First Overall Team Trophy.

As a result of their overall victory the team has also been chosen to participate in the “crew exchange” program between the Intercollegiate Offshore Regatta and the EDHEC Sailing Cup being held April 24 to May 2 2015 in La Rochelle. The EDHEC Sailing Cup is the largest student offshore regatta in the world.