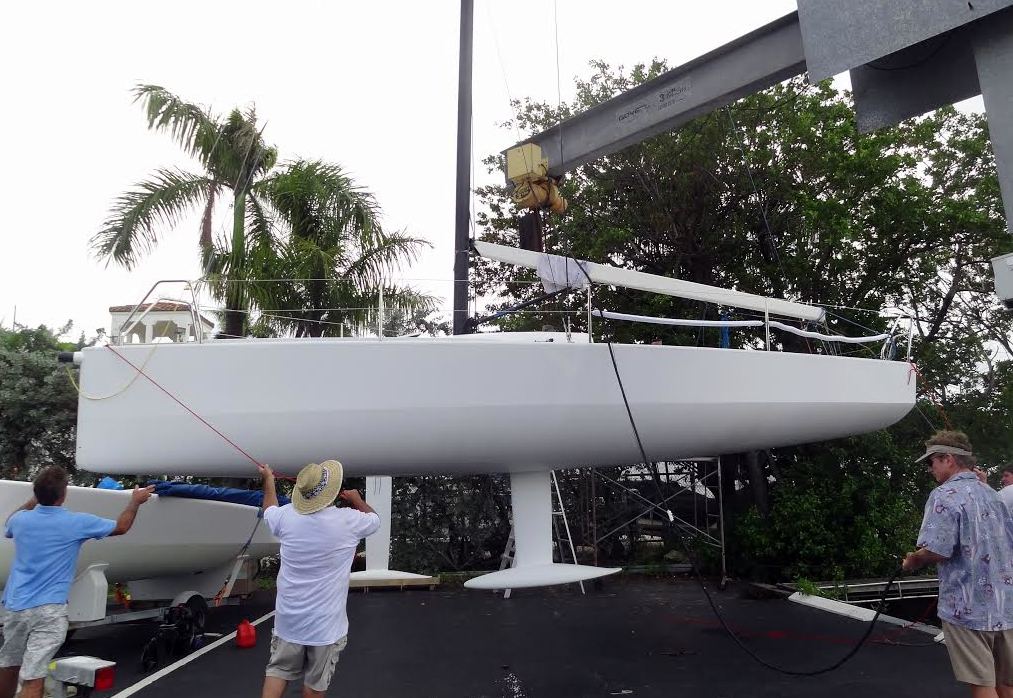 Sitting on the patio of the Biscayne Bay YC on Sunday, enjoying the evening breeze and the traditional Lime Daiquiris that signal the end of the Lime Cup, it was easy to look across the parking lot and see Cliff Clark’s new Donovan GP 26 “Picarón” on the trailer, and forget about the work that went into putting the boat on the water for the regatta.

After all, just over a week before, the designer/mast builder Jim Donovan arrived in Miami with the mast, and a work/gopher crew arrived to pitch in on the project at various times during the week. Through the week, Jim kept all of us involved and working toward the weekend like an engine firing on all cylinders, resulting in a test-sail on Biscayne Bay on the afternoon before the regatta. Irrespective of the monumental amount of work done, to put any new boat on the water, and this one was no exception, the smile on the owner’s face would never have been as big if the boat had not been so much fun to sail.

The thread about the Donovan GP26 Production in Turkey is chock-full of information about the boat, but hopefully this report can fill in some of the blanks about on the water performance. “Picarón” hit the water on Friday 9/26 for a brief test sail in 8-10 knots of breeze on the flat waters of Biscayne Bay. After a quick look at the working sails and AP spin that came with the boat, we had a look at the MH and Frac Code Zeroes, and headed in to put the boat away for the night, comfortable with the knowledge that everything worked as intended, and that the boat was responsive and fast, even in pretty light conditions. It was time to go racing.

Saturday boat calls are early for the Lime Cup, with competitors headed across the bay and out the Stiltsville channel, to the starting area SE of Key Biscayne, for a race up to Ft. Lauderdale. The usual short first leg to the east was scrubbed this year, due to a missing National Park mark, so the race was essentially a drag race to Ft. Lauderdale, with the requirement of leaving all marks of Government Cut to port, in about 8-10 or 12, roughly out of the east. The Gulfstream was in close enough to make this requirement moot, with most boats heading out aggressively enough to get in the Stream and out beyond the channel pretty early. The angle was close enough to keep us from using the Frac CZ right off of the line (after an operator-error late start), but even with the headsail, we were able to work forward and low on the high boats, including a pair of Tripp 33s, a Hobie 33 and an Evelyn 32, who all fought higher than what we wanted to sail. As soon as we cracked off a bit and set the Fr0, this changed drastically. 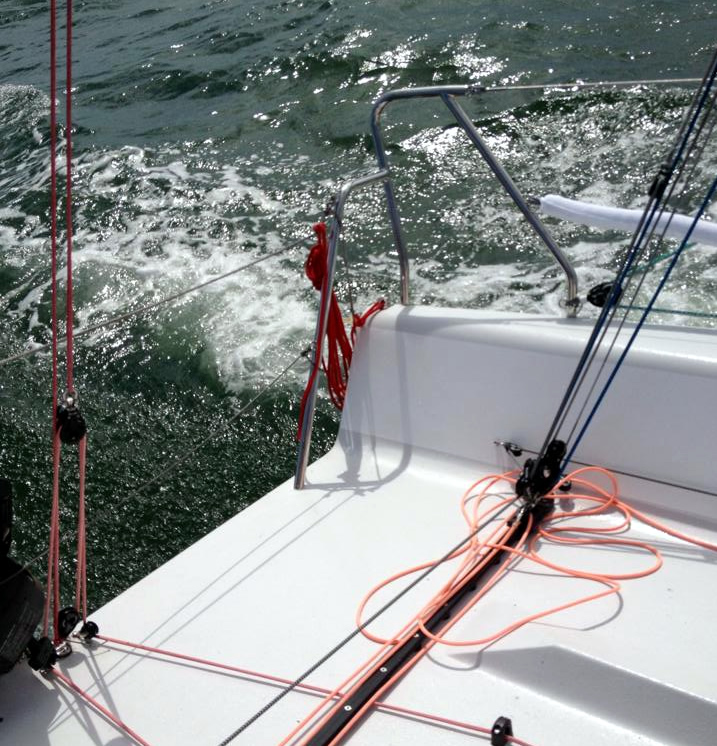 With the slightest hint of following sea, we were able to repeatedly put the boat on waves, effortlessly getting onto a plane and staying there from wave to wave in the puffs. I say effortlessly because you really don’t notice the transition, it is so smooth; even in displacement-mode, the boat puts out very little wake, unless you A) have a fat guy on board and B), he is sitting or standing in the stern and to leeward (we tested this extensively on Friday). This allowed us to roughly parallel the coast, and maintain our position in the Stream, while not working way out with some of the rest of the fleet. Eventually, we needed to soak down to the finish, so we shifted up to the MH Code 0, and worked down on every puff. One interesting observation here is that we were the only boat (if memory and observations are correct) using a Code sail at this point, staying on edge and hiking like hell. It gets the apparent forward, and keeps it there. This has something to do with our inside position, negating the need to drive down as much as the outside boats did, but there were boats on the inside flying reaching kites. W

e finished off of the Dania Pier without ever having to do the low and slow soak to the finish; we were juiced up the whole time, thanks to early planning and soaking on puffs. The end result on Saturday was that while we could not hang within seven seconds per mile of the beautiful brand new Oyster 57, who corrected out about 10 minutes ahead, we were competitive with everyone else, edging a well sailed Farr 395 by about a couple of minutes.

Sunday was a different beast, with pretty steady 10 kt breeze a bit farther forward than what we saw Saturday, for the shorter ride from Lauderdale to Government Cut. Seeing a bit of north current on the pin, we were committed to getting in toward the beach. Having done this race a time or two, we knew that a lot of boats like to fight high on the Sunday leg, and we were content to let them go, knowing that we wanted the chance to get the Fr0 into clear air, and fairly certain that we could hike the boat down to the point that we could keep it off of the beach. This meant that the Fr0 was going to be on the jib halyard, which in turn meant that we were starting bareheaded. The predicted fight to go high materialized right on cue, and we had a nice lane to drive right over the pin just as the kite was hoisting, a few seconds late, but with a nice clear lane to head down toward the beach, and out of the north current.

Once we settled into a lane, with two bubbas hiking and the two skinny guys sailing the boat, we were comfortably making our way down the beach, hitting eight and change often, and staying in the sevens pretty regularly. That put us to leeward and even-with or a bit bow-out on the Aerodyne 38, and a couple of lengths behind the Farr 395 (and well inshore of both), with all of us watching the Oyster 57 sail away to the win. The finish was offshore enough that we had to downshift to the jib a couple of miles from the end. This allowed the Aerodyne to leg out a bit, beating us across the line by a couple of minutes. The corrected results put us in third for the day, 20 seconds or so behind a Beneteau 36.7. The combined times for the two days left us comfortably in second.

By the time the party started, we had already finished removing the rudder, lifting the keel, putting the boat on the trailer and cleaning everything up, with an hour to spare. This was despite taking an extra hour to get in from the race course, so that we could sail down and around Key Biscayne on the way in, to give the fat guys a chance to take the helm and have some fun. The tear-down was neither effortless nor overwhelming. With a bit of practice, it will be a smooth operation. 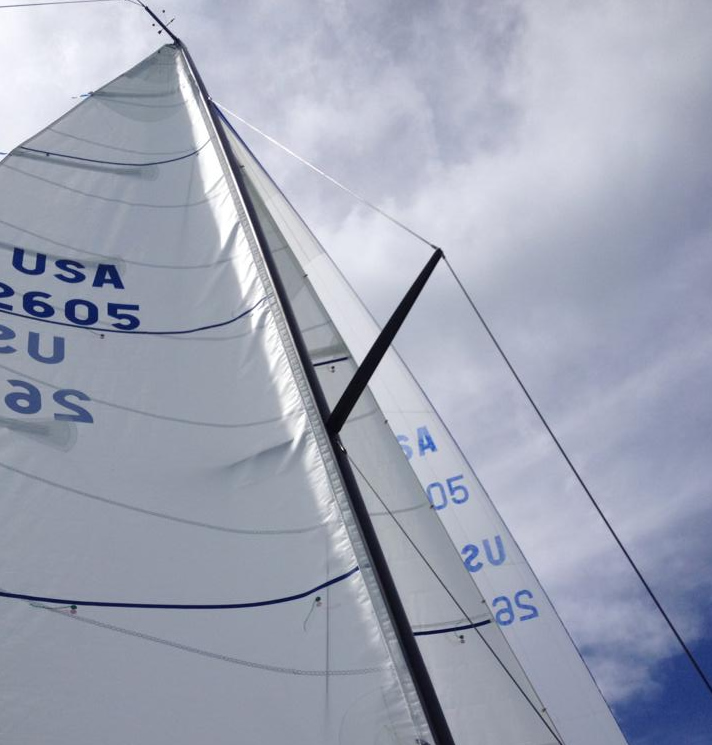 Conclusions about the boat…. To use single-word descriptions, “fun”, “fast”, “effortless”, “value” and “fun” spring to mind. (I like fun.) I say “effortless” to describe the ease with which the boat planes; it is easy to overlook when you have made the transition, it just happens. Add a little bit of wave action to the mix, and the fun-factor goes up exponentially. It will be interesting to see how the various boats perform with the different rigs (Picarón has a Jim Donovan-built mast and boom), when the east-coast boats get together, and they Should Get Together.

This is an awesome amount of boat for the money, a boat with the ability to peg the giggle meter at the red line, to go offshore (and come back in one piece), and do it in a hurry. Sail one, or two. Here. – Chris Woolsey.

alone (in the dark)