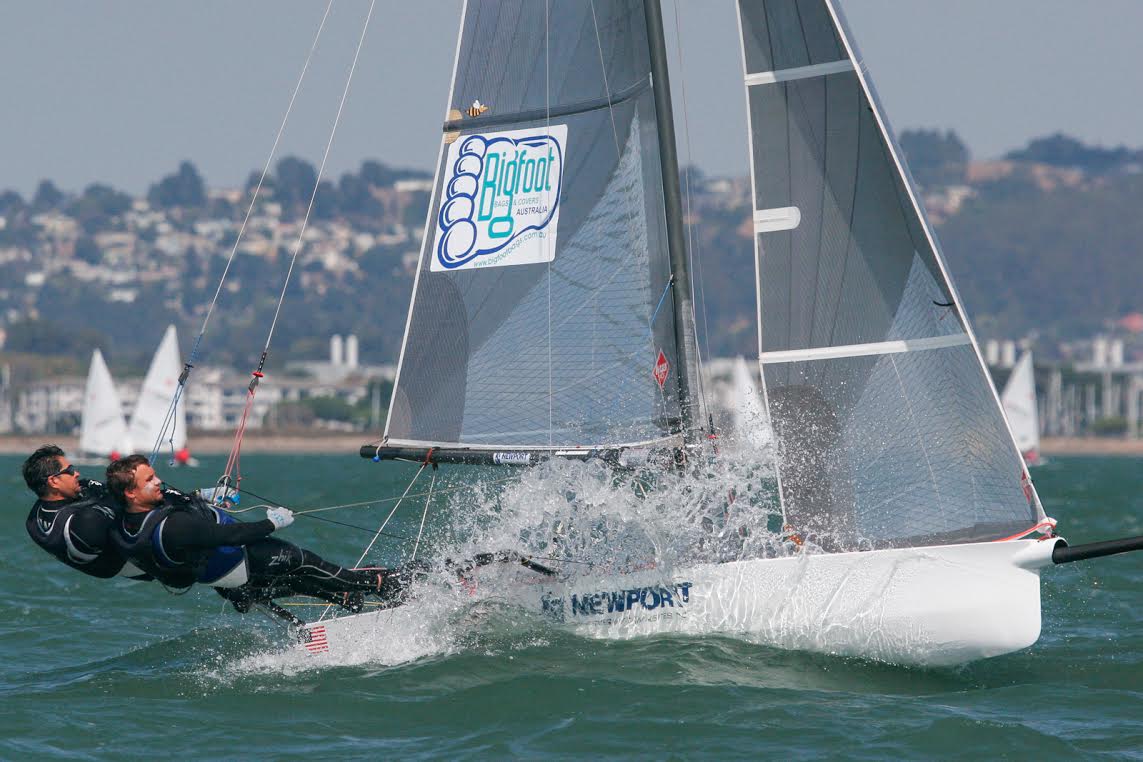 It was decided a couple of years back that the 2014 I-14 US Nationals would be held at the High Sierra Regatta on Huntington Lake. Two years later and we are now in a major California drought and Huntington Lake is not looking so good anymore. With historically low water levels unseen before, this put the 2014 National Championship in uncertain limbo. What to do. Enter the always accommodating Richmond Yacht Club on San Francisco Bay. Great venue, great people, and it was a no brainer. This was the same venue of the wildly successful and windy 1997 I-14 Worlds and host to this year’s International Canoe Worlds. With an already packed summer schedule, RYC welcomed us with open arms and it was quickly decided our Nationals would coincide with the RYC Totally Dinghy Regatta and Wylie Wabbit Nationals. Problem solved.

Team Newport Adhesives and Composites (Paul Galvez and David Liebenberg) were one of the first teams to arrive earlier in the week. I barely made it as I just got back from a Baja adventure, narrowly escaping the clutches of Hurricane Odile by only a few short hours, then drove 7 hours north the next morning from the OC to the Bay area. After a Red Bull binge, I rolled into RYC late night only to find a bunch of drunken International Canoe sailors in the parking lot singing and laughing amongst each other as they wrapped up their World Championship. Innocent bliss was my first thought until I returned the next morning and found what appeared to be a used condom sheathing my bowsprit and an empty bottle of Jack beside it. I didn’t know what happened. I didn’t want to know but if you saw a frustrated looking guy the next morning dousing his skiff repeatedly in a full bath of denatured alcohol you now know why. End of subject.

As the 14’s rolled in, so did the who’s who of Skiff Sailing. World, North American, and National Multi Class Champions in full force along with several AC Youth veterans, and of course the local Skiff Foundation characters. Add the I14 Elders of Champions Past and we have ourselves a downright regatta of epic proportions. The Elders chose to sit this one out but were still on the water to set marks, critique your spin hoist, or just stir up the bullshit in the bar. Those guys have been there, done that and for that we love them. Laughlin/Arens/Bates/Schmidt. When the Elders appear in force, R-E-S-P-E-C-T. It was also a great opportunity to check in on one special member of the 14 Brotherhood, Rand Arnold, as he battles some serious health issues at the moment. Great to have him make a guest appearance and make everyone’s weekend in the process. Prayers to you – brother, get well soon.

Sailing the bay in Summer, I wanted to make sure the boat was ready for a typical bay thrashing. We had some uncommon breakdown issues at the Hawaii event earlier this year that kept us off the podium. That was not going to happen again. Since I was short on time and tools, we hit up Scott Easom over at Easom Rigging. Not only did he keep his shop open after hours for us, he helped fix a complex problem on our vang strut with a simple solution. On top of that, he gave us some fine brew while we cut, drilled, and epoxied into the night. We were now bombproof and ready. Thank you Scott. The short training sessions leading up to the regatta went well. Yes, we had a training deficit, but we re-confirmed what we already knew – our boat speed was excellent especially in twin wire conditions. We also saw that the competition for this particular event was ripe with talent. Many of these teams have trained very hard leading up to this event. Everyone was ready for the show but there was only one boat we were really concerned about. We had a feeling it was going to be a long hard fought regatta between us and we were correct. May the best team win.

Eight races were scheduled for the three day event including a throw out and a long distance race. At least one distance race is required for the class championship and a nice barn door style trophy is awarded separately for this race alone. Lot’s of big names in yachting on this one.

Friday brought us some light breezes for the first two races scheduled including the Long Distance race. Out of the gate, Brad Ruetenik and Garrett Brown out of San Diego demonstrated their light air power with a commanding lead in race one followed by Dalton Bergan and Fritz Lanzinger (the ones to watch) with Terry Gleeson and Evan Sjosted (sp) catching third. The next and final race of the day was the Long Distance race filled with light breeze, big holes on the course, and some strategic pressure areas. Paul Galvez and David Liebenberg battled hard with Dalton/Fritz from start to finish leaving the rest of the fleet in their wake. Galvez/Liebenberg take the Long Distance race but only by a few feet. We have the making of a boat race folks. 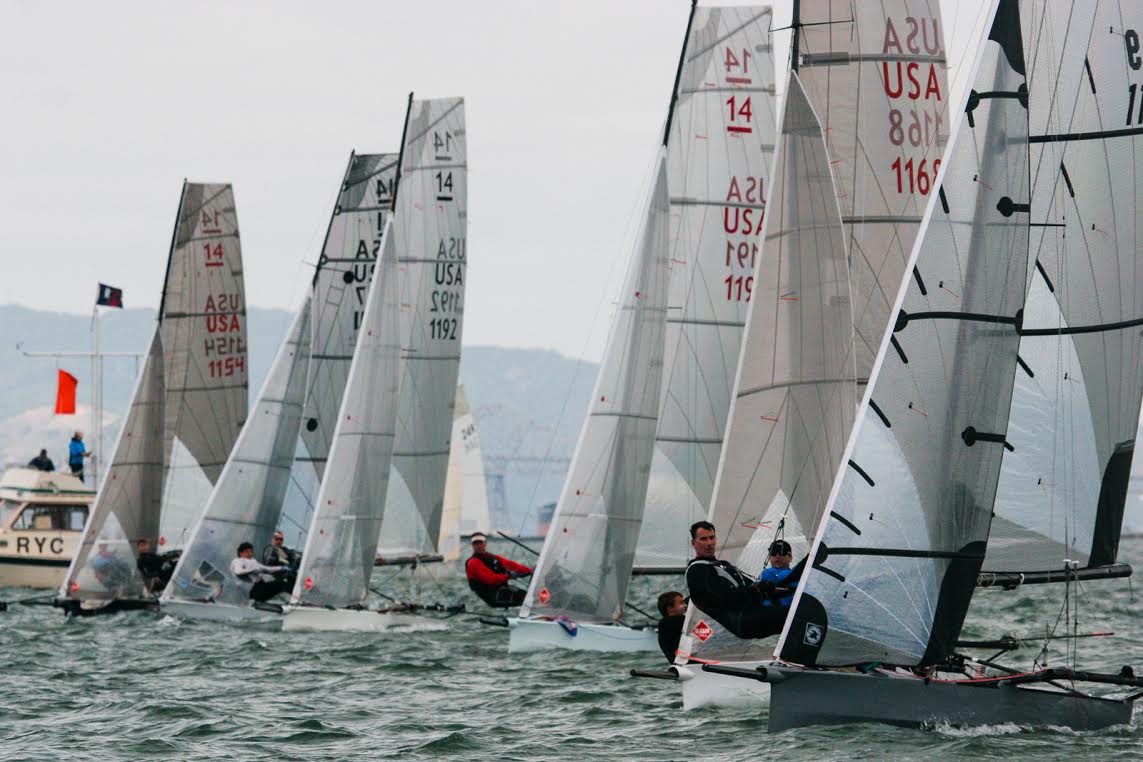 Day two starts out with better pressure and twin wire breeze but with some bay chop ebbing for good measure. Gleeson/Sjosted win the lighter first race of the day against a very tight fleet at the front trading places with Galvez/Liebenberg and locals Chris Rutz/Mikie Radjowski. The next race has the breeze building and Galvez breaks a jib halyard right at the gun as if a stray bullet from the RC had severed the halyard. Weird. Galvez is forced to capsize and repair but climbs from a deep DFL to 7th place. Not good. Bergan/Lanzinger win this race in commanding fashion. Another Seattle team, Bersch and Shinstone capitalize on this and get 2nd coming to life as if a switch has been turned on and they are now another new threat for the rest of the regatta. Things are getting interesting. Galvez/Liebenberg take the next race followed by Ruetenik/Brown and Bersch/Shinstone. Back to the dock for snacks, beer and thrash talk.

Day three and we go into the last day with Bergan/Lanzinger 2 points ahead of Galvez/Liebenberg. It’s still up for grabs but the window is closing and the drama is escalating. Big wind is forecasted but it never really gets nuking. For the first race of the day, Bergan/Lanzinger start perfectly to leeward of Galvez/Liebenberg and control them the entire race. They gain another two points. Ouch. Galvez comes back to win the next one but Bergan is still second and now there is one race left and a three point separation between the two teams. For the last race, a full blown no holds barred match race ensues. The wind is up, and Galvez/Liebenberg nail the boat end with fury sailing a nice powerful low mode to camp on Bergan/Lanzinger, taking them way outside to the left side of the course far beyond the layline. Voices are raised and the adrenalin is pumping. The two teams drag race each other to the weather mark coming in hot on port tack while the rest of the fleet creates a near solid wall of starboard tackers. Galvez dips and ducks, finds a hole and rounds while Bergan does the same, both now very well mixed into the fleet. Remember Galvez needs a three point gain to win on tiebreaker. Galvez finally gets his three boat separation downwind after a killer run but it does not last long as they round a very crowded leeward mark stacked with boats and fouls. Bergan is buried deep too. After a penalty turn, there is still a chance upwind for Galvez as the two teams intentionally split tacks into another fleet of boats but all hopes are crushed as they lose one boat by a nose hair at the finish. Galvez/Liebenberg win this battle but it is the combined experience of Bergan/Lanzinger that war and the regatta by one point. Bergan/Lanzinger have the skills and it showed. Very well done boys.

No matter where you were on the course, there was some epic racing whether at the top, middle, or back of the fleet. Make one mistake and it was a mighty big task to get back in it. This was by far the most competitive US I-14 Nationals I have ever seen. RYC showed once again why they are the go to club in NorCal for small boat racing. Congrats to everyone for making this one a memorable event.