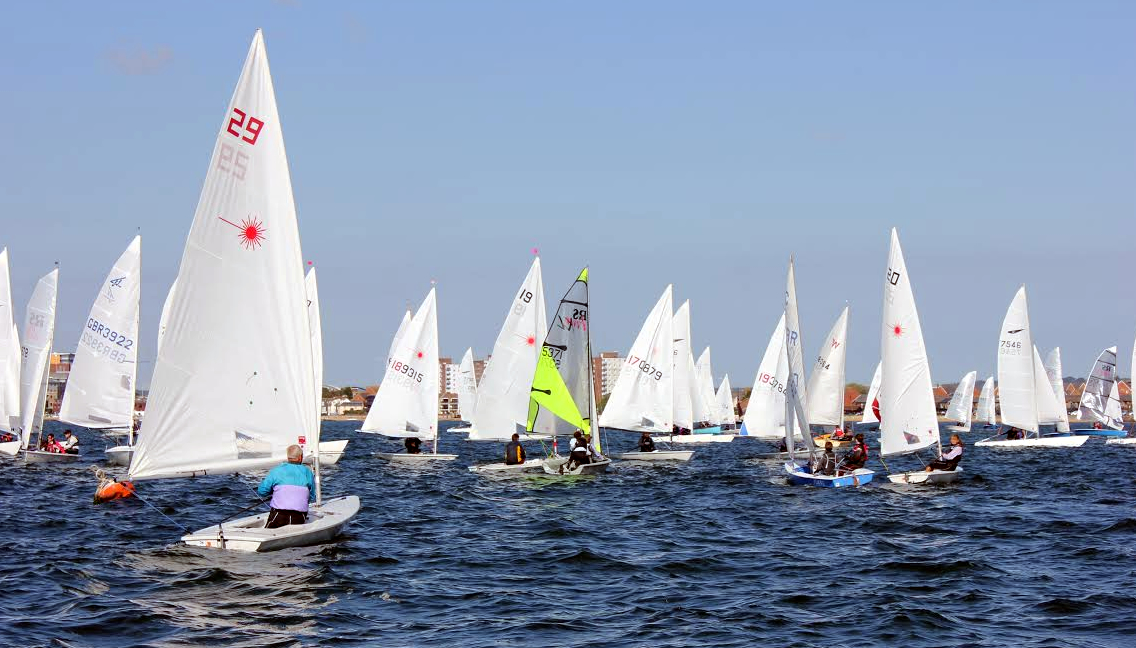 What a day and what a race! Bright sun, 10 to 18 knots of northerly breeze, and a rather astonishing entry of over 200 boats, and 600 competitors gathered to celebrate Barts Bash at Parkstone Yacht Club. Competitors raced in four fleets, two youth starts and two adult starts, with the adult dinghy start of ninety-two boats hitting the line within a few seconds of each other. The sight of this fleet powering their way down the harbour was something the helpers and independent observers for the Guinness book of records will remember for a long time. The fleet was led away by the eventual first boat to finish, a Dart, closely followed by a 49 er and a junk rigged day boat. The course was a tour of the harbour, over 10 km in length and with several challenging legs, tacking between islands and shallows. The youth fleets raced on a smaller circuit near the Club, with a mass of Toppers, Optimists and unique to Poole, the tiny AB dinghy.

The presentation after the event was on the balcony, by Barts friend and ex Olympian, and now team SCA sailor, Annie Lush. Annie told the audience of Barts generous character, and how he supported the Match race Girls during the 2012 Olympics, by staying behind after winning his medal, and working with the team everyday, a truly kind and generous spirit.

Bart sailed a J 24 at Parkstone with Annie and current Olympian Ally Young, so he would have been immensely proud of his legacy at Parkstone Yacht Club. Annie presented prizes to the first overall in most fleets, but the best applause was for the youngest competitor, a one year old in a J 24 and the oldest combined crew of a Poole Dolphin, where the three crew averaged over eighty.
Parkstone Yacht Club are delighted to have supported Barts charity and we hope that this event will become an annual part of our calendar, it was a brilliant gathering of old and young, racers and cruisers, and a great legacy for Bart. – Anarchist David.