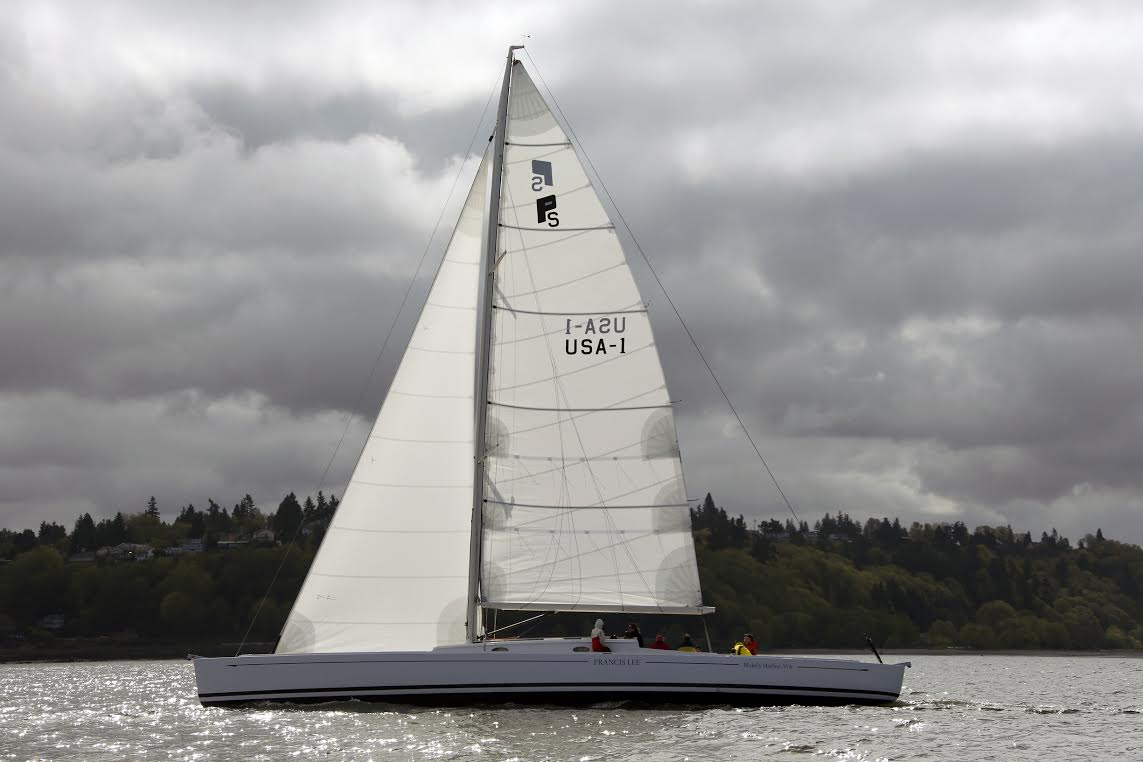 We have been incredibly remiss in giving this incredibly beautiful new Robert Perry design. Bob helps us make up for it.

I have known Kim Bottles for about 30 years. We share a love for the same kinds of boats. I wasn’t too surprised when Kim called about three and a half years ago and suggested we do a new custom boat for him. We had discussed the possibility on several occasions. I love designing sailing yachts. It’s my life. It’s who I am. It usually involves me getting into the clients sailing preferences and his own particular vision of his life on the water. I work hard to wrap my design around the client’s vision so the boat reflects that vision. My job is to make the client happy with a boat I can be proud of.

Kim came up to my shack and we talked about boats we loved, and in a short time I realized that the boat of Kim’s dreams was also the boat of my dreams. Kim came from a background of owning skinny boats. He started cruising with his parents on a Dragon. He had owned a Swede 55. He had owned a 30 square meter. Kim just liked narrow boats. He also had a proclivity for double enders. We talked about Garden’s OCEANUS. We looked at RED HERRING.  I pulled out a roll of flimsy sketching paper and I quickly  drew up a 60’ double ender. It had overhangs and a nice sheer spring. Kim loved it, rolled it up and took it home. A day or two later, Kim emailed me a drawing of the L.F. Herreshoff SAILING MACHINE. “I like the look of this.” My overhangs were gone and replaced by canoe like short overhang ends. I liked it. 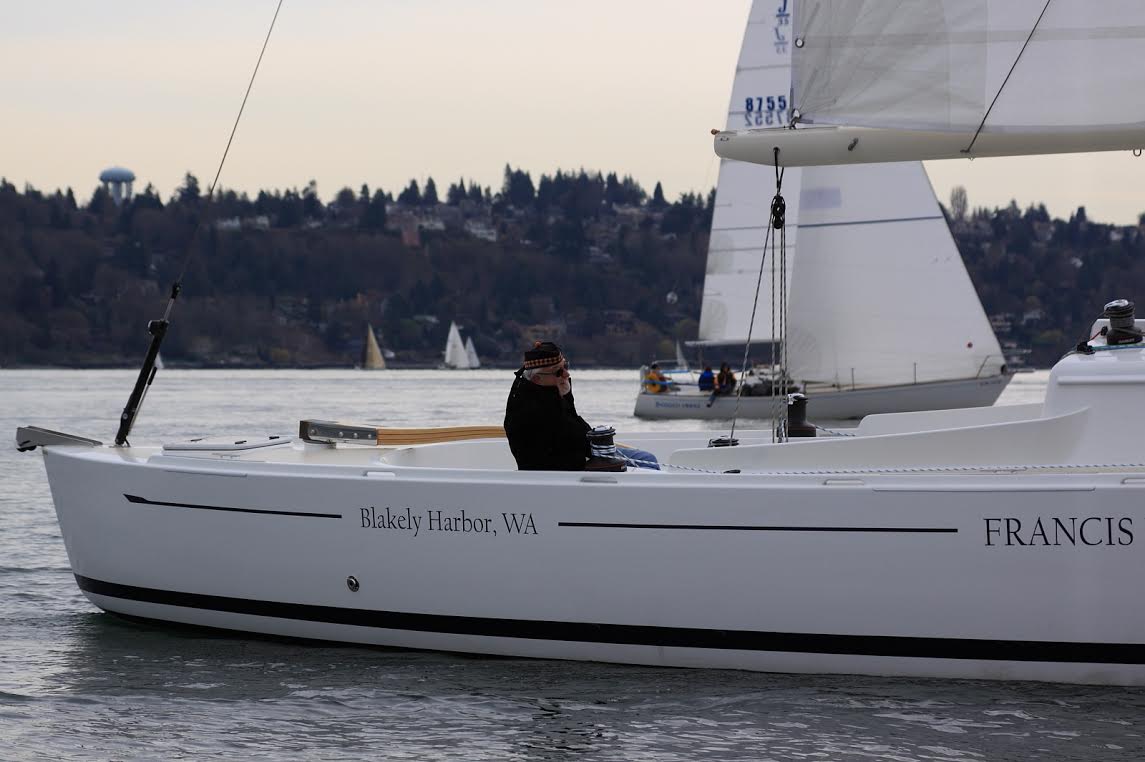 You either like double enders or you don’t; it’s purely a subjective thing. If you are a lover of trim boat fannies, the pointed stern of a double ender can speak to you. It looks “organic”; right. I like double enders and I have designed a lot of them. I am comfortable with the shape options and the challenges. While it’s easy to sweep the lines aft into a natural, normal and pretty pointed stern it just doesn’t work well for distribution of volume. As I pondered the challenge of pushing volume into the ends one boat quickly came to mind, Laurie Davidson’s AC boat BLACK MAGIC and the way Laurie manipulated the bow shape to push volume forward in that rule induced skinny hull form. I thought I could use that same shape approach on both ends of the new design. Historically the only double ended boat I can think of with a similar stern is the Ray Hunt 110. The box like sections of the 110 precluded a dainty, volume challenged stern. This was what I was after.

Off I went producing hull shapes. I presented Kim with eight different hulls before thinking I had it right. This does not include all the hulls I discarded without giving them a number. But for me, designing the hull is pure joy. Then my personal typhoon hit. My 30 year old son Spike died suddenly from pneumonia, alive one Sunday and dead the next. The support from the SA family was amazing. Good old Kim would call me and we’d talk about the boat and he’d suddenly say, “I’m coming up.” “ Now?” I’d ask.” “Yes, now.” I figured out later that Kim was babysitting me just the way Ben Seaborn’s clients babysat him when his world grew dark. The important difference is that Kim did a better job and me typing this today is proof. My snug harbor was this design project. I tucked in a couple of reefs and got to work.

I had a lot of help with this design. Ivan Erdevicki, my old pal from Monte Negro, did the keel and keel structure. Tim Nolan in Port Townsend did the structural engineering. Jim Franken, Tim’s associate, did a marvelous job producing the 3D model and all the file necessary for the CNC cutting jobs. The decision was quickly made to build the boat from cedar strip planking. I shit a brick when I heard this. “ I want a carbon hull and deck so I can hit my weight targets!” I knew that giving this boat with 9’10” beam stability would require a good chunk of lead ballast and I did not want to give up an ounce. But Tim calmed me down and showed me that my weight targets in the preliminary weight study were within reach with red cedar strip planking and a composite deck. Fact is that FRANCIS LEE floats as close to its lines as any boat I have designed. Phew! 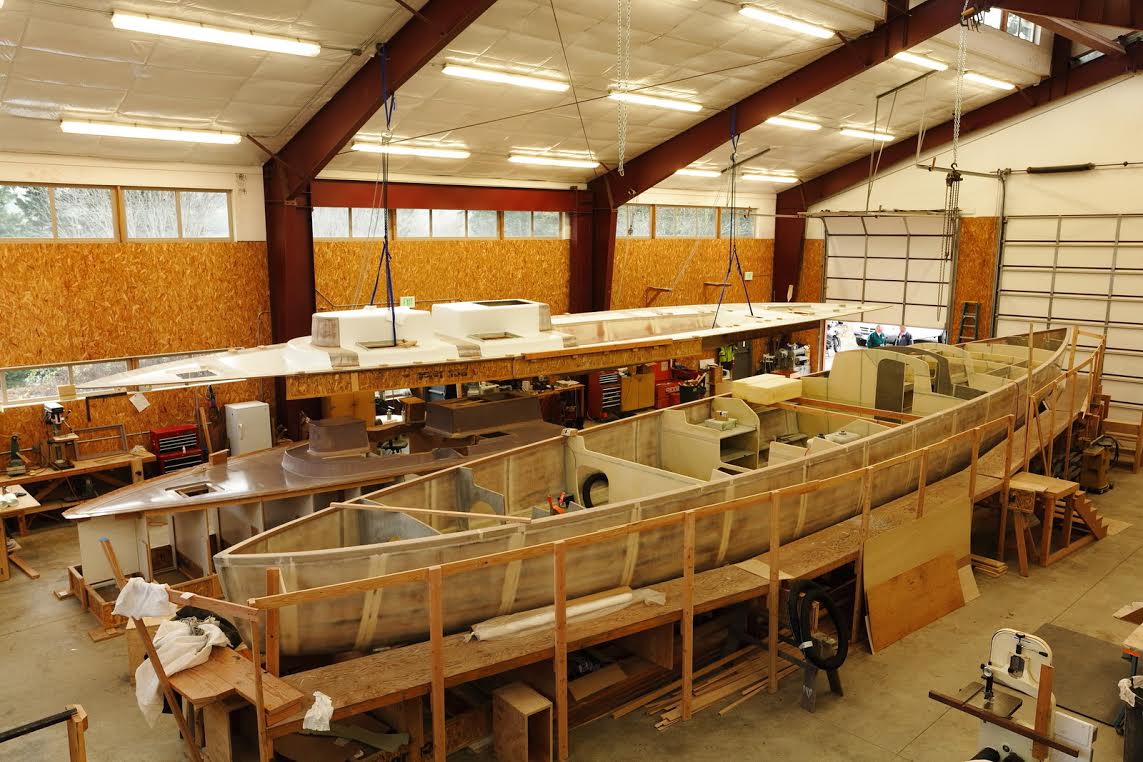 The Northwest School of Wooden Boatbuilding in Hadlock, Washington, just a few minutes down the road from Port Townsend, built the hull and deck. The interior was all composite panels and built intact alongside the hull. This allowed the workers full access to all the joinery joints without the hull being in the way. The day the interior was lowered into the hull a big crowd arrived to watch. The interior was slowly lowered into place. It was tight. We removed one hull transverse brace and the interior slipped into place. Someone later asked, ”How many times did you have to put it in before it fit?” The answer was once. As Jim Franken would say in a cavalier tone, “It had to fit. It’s all from the same computer file.” I knew that.

In a rough finish state FRANCIS LEE was trucked to CSR Marine in Ballard for finishing. They did a great job. The build quality on the entire project could not be better. We launched the boat early to check the flotation and were very happy with the results. “Of course I knew it would float on its lines.” There is a God.

We used the rig from a Farr 40. It was so close to the rig I had drawn originally that the sailmaker suggested we look for a used Farr 40 stick. This saved us some money and time and allowed us to tap into some experts in Farr 40 rig setup. Soon, FRANCIS was sailing.

To date everyone involved with the project loves the way the boat sails. It’s fast, weatherly to an extreme, impeccably balanced (thanks in main part to the skinny hull) and surprisingly stiff.  The boat can hit 14 knots under main and jib effortlessly. I had several VPPs run and I was confident but VPPs don’t tell you how the boat will feel. The first time the boat heels to the press of sail you wonder what the helm pressure will do. It’s the thermometer on the overall health of the boat. You wonder when the boat will settle down on that comfortable stability “shoulder”. While there are numbers for most of this there is nothing like feeling it through your arm on that long tiller for the first time. There is nothing like looking up at the Windex and asking, “Shit, are we really pointing that high?” FRANKIE felt good. Nobody wanted to willingly give up the helm. The boat has shown very good manners in all conditions. It’s a pussycat to sail.

So now it’s pretty much all old news. FRANKIE has won some races, been to the Perry Rendezvous and had lots of “What the hell is that?” looks. I enjoy sitting on the gas dock at Shilshole waiting for Kim to pull up in FRANCIS to take me racing. When Kim slides the boat up to the dock all heads turn. I beam.

I’m not done. I have more boats in my head busting to get out. But for the time being when someone says, “What’s your favorite boat out of all the ones you have designed?” I don’t him and haw anymore. I say, “FRANCIS LEE.”

the gun that keeps on giving