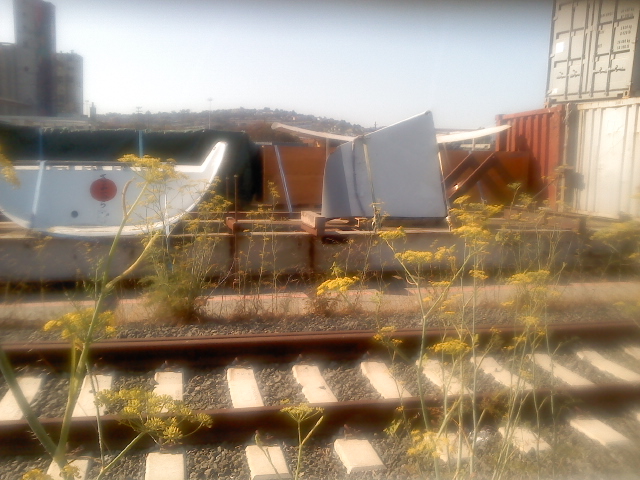 One of the world’s legendary Maxi racers sat in a climate-controlled shed on the Eastern Shore of Lake Michigan for a decade at a cost of tens of thousands of dollars per year, while rumors said she was broken or delaminating, or that maybe she could never again be competitive against newer boats. We think Larry just a little sentimental about the boat he nearly died on, and he’d rather have her as a trophy than let someone else make new memories on Sayonara.

And that’s what you see here – the bow and stern of Sayonara waiting for a lift on Pier 80 after a date with a chainsaw; the final remaining signs that there was an America’s Cup in San Francisco.  There’s no sailing center or junior racing center; no museum or clever, multi-use development.  In fact, despite all the pre-event posturing, there’s very little legacy for ‘the Summer of Sailing’ at all on the ground in SF; just a few rusty boxes and a famous yacht sliced up like an 8-point deer, ready to go on some wall or building or corporate campus.  It can’t be any more cliché, but we’re left no choice but to say it: Sayonara!

Here’s the cover story about Larry’s infamous Hobart from something called BusinessWeek, apparently a magazine in the 20th century.  Like Sayonara, something obsolete; a collection of stories and advertisements bound together in paper.  Imagine that!

Title song from the same era as the boat, and a bit creepy, like its owner.  Interesting photo thanks to SA’er ‘L124C’.