back that ass up 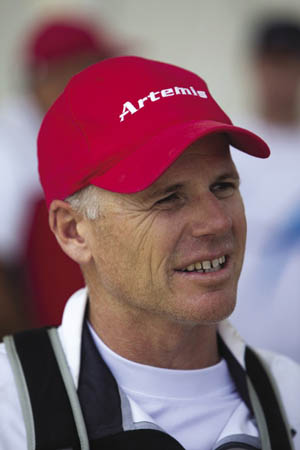 Terry Hutchinson’s surprise departure from Artemis Racing a year and a half ago was overshadowed by Big Red’s tragic accident a few months later, but we’d always noted how incredibly quiet Hutch was after getting the flick.  An article in his hometown-ish Baltimore Sun gave a clue as to why a short time after his ouster; “not wanting to say anything that could jeopardize the terms of his release…” was how the author put Terry’s reticence to open up, and that’s all anyone would get for more than a year (not that it stopped the speculation for a minute).

Until earlier this month, when Maxim writer Alexa Lyons’s interview with Hutch hit the interwebs; called “Can Sailing Be The Next F1” (Answer: No, dumbass), there was, at first glance, nothing remotely new or interesting about the piece – other than the fact a sailing profile was in a major national mainstream men’s pub.  But one answer was a little shocking, and it was allegedly in response to a question from Lyons about his termination from Artemis Racing.“I had a massive falling out with the owner of the team and the CEO about the safety of our yacht so they decided to terminate me.” Hutch told Lyons.  “Ten weeks after my argument with the owner about the safety of the Artemis boat, the boat capsized in the San Francisco bay and one of the sailors was killed. It was a known thing that the boat was not safe…”

And today, he is backpedaling faster than a foiling AC72 in San Francisco breeze.

While Hutch has refused to answer any of our detailed questions on this one (despite 16 months of badgering and my reminder that a few answers would stop a lot of speculating), he admitted to us that he deserved all the blame for what Lyons typed up and published – though it would be easy and fairly graceful for him to fall on his sword for everything.   We can probably assume that his comments were some kind of breach of the Cup-standard non-disclosure clauses in any employment and termination agreement, for which he presumably received a nice severance package. But we know Hutch, and he’s not the kind of person to slip up like this with a newbie editor of a pretty vapid magazine; maybe he was off on one of his early morning A-Cat training sessions when the Cup media people came through to do interview training?

Hutch certainly wouldn’t be the first to be screwed by a reporter turning background conversation into foreground publication, through we doubt that Lyons, fresh off the intern roster and still proud of her title as “Project Manager, Maxim Hometown Hotties Competition” was playing investigative journalist, driving Hutch into a slip-up about the intrigue of the America’s Cup.  Possible? Sure.  Likely?  No.

As for the specifics of what caused the big accident, we’ve told you before that we’ve never been happy with the information available, but after 16 months with seemingly no one else giving a shit, we’ve stopped caring too.  There’s just not a lot out there other than one post from Hutch and one from a Maxim blog writer who interviewed him.  We’ll leave it to you guys to figure out where reality lies.

And hopefully, the whole mess will end with Terry’s strong and unequivocal apology, posted on Facebook an hour and change ago.  Here it is in full.

On August 7, Maxim magazine posted an interview about the 35th America’s Cup that included some untrue statements and inaccurate remarks I made about Artemis Racing. To be clear, Artemis Racing is a well-organized and responsible professional sailing team that considers safety an absolute priority. My departure from the team more than five months prior to the tragedy of May 9, 2013 was on agreeable terms with the owner and my teammates. No one could have anticipated what occurred, and I meant no disrespect to the memory of Andrew “Bart” Simpson or to any current or past members of the Artemis Racing team. I deeply regret any misunderstanding that was drawn from the Maxim interview.

Regarding the safety issue specifically, following the capsize of the Oracle AC72 in October 2012, Artemis Racing went through a thorough safety review, including enhanced training for the crew. Every sailor conducted underwater survival testing, including carrying and learning how to use canisters of spare air in the case of an accident. As a participant in these exercises, I can attest to the fact that the sailors, shore support, and entire team made safety the highest priority. Like many professional sports where competition is conducted at the highest levels, the 34th America’s Cup tested many boundaries, as demonstrated by the sheer power of the AC 72’s, in both their size and performance.

As preparations for the 35th America’s Cup come underway, I wish Artemis Racing and all involved success.

Thanks to Juvenile for the title inspiration.