not necessarily the news 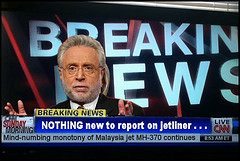 No TV news organization has fallen further than CNN over the past decade (Fox cannot fall any further, they started as low-brow, race-bating, right-wing shills, and have remained there) with the cable news giant hitting historic lows in almost every category of viewership this year.  For our non-American readers we suggest a trip over to Jon Stewart’s hilarious explanation of everything wrong with CNN (and check out his tongue-in-cheek Kickstarter campaign to buy it out), but for the rest of you, we’ve got a spectacularly dramatic sailing video to prove all of Stewart’s points – and you just have to watch it.

Yes, we understand that CNN has ‘content partners’ like the WFRV ‘reporter’ who narrates the piece, but maybe, just maybe, they shouldn’t?  This ain’t a joke or an Onion story, folks.  Share your thoughts on the sheer genius of the piece here.

Meanwhile, CNN does have the only mainstream english-language sailing news show out there, and while Mainsail’s quality has been slipping over the past couple of years and the CNN audience is nearly gone, it’s still some of the best-produced conventional stuff out there.  Here’s Scottish Shirley and Part 1, Part 2, and Part 3 of the Land Sailing Worlds we reported on last month.