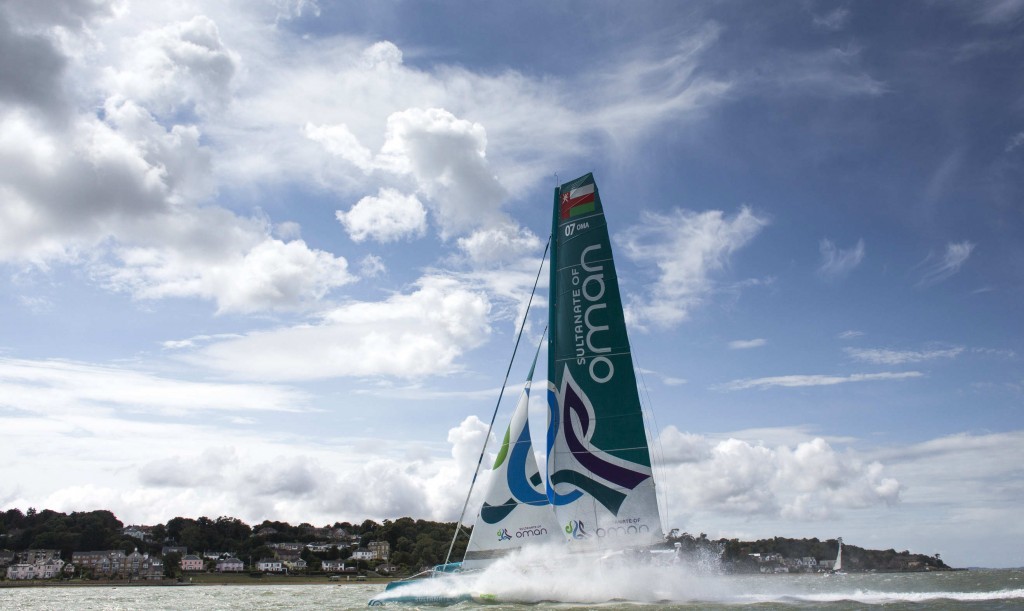 Sydney Gavignet’s Oman Sail Musandem took line honors in the Round Britain and Ireland Race just past noon today, with a final time of 3 days, 3 hours, and 33 minutes (rounding up a touch).  This breaks the existing race record of the Volvo 70 Groupama by days, and beats the nearly twice-as-long Banque Populaire V’s absolute course record by around 16 minutes.  While technically it seems the RBI course may not comport with the WSSRC’s rules on a RBI record, we hope it stands; this is a giant-killing effort that saw a top speed of an incredible 43 knots…just fucking stellar!

Meanwhile, the Volvo 65s are busting some big misconceptions; the first is that ‘One Design’ always means ‘close racing’; as you can see from the tracker, it doesn’t mean that at all – unless you are one of the three boats bringing up the rear.  Ian Walker is running away aboard Abu Dhabi with Iker and Mich Dej well behind, and the final trio in another time zone.  While generalizing from a single race is silly, it’s interesting to us that two boats at the opposite end of the preparation curve – Azzam with more than a year of prep time and Campos with around a month – are leading, while the boat with the most time on the water (SCA) is fighting for DFL with two other new entries.

The second misconception is about their speed, long thought to be significantly slower than a Volvo 70.  Sure, they’ve got perfect angle/gale force conditions unlikely to revisit this race for decades, but either Walker or Martinez is going to break Franck Cammas’ monohull record.  That ain’t slow.  Neither is the Volvo 70 Monster Project, nearly 100 miles behind the back marker VOD 65s, nor is Brian Thompson’s Open 60 Artemis, which is nearly 200 miles back.

Not Your Daddy’s Class 40

Remember when the Class 40 was designed to sail around the world as a cruiser or racer?  Tough as nails, cost-controlled, and bulletproof, right?  They’ve come a long way, baby – both in speed and in frailty.  Four of the five Class 40s are out, including the brand new Mach 2 Stella Nova and the slightly older but hells-quick Concise, which were both crushing the 50-footers until they bowed out with damage.  Get your shit together, Class 40 designers/builders!