i can’t stand the rain (against my window)

Webb Chiles does things you will never, ever do. 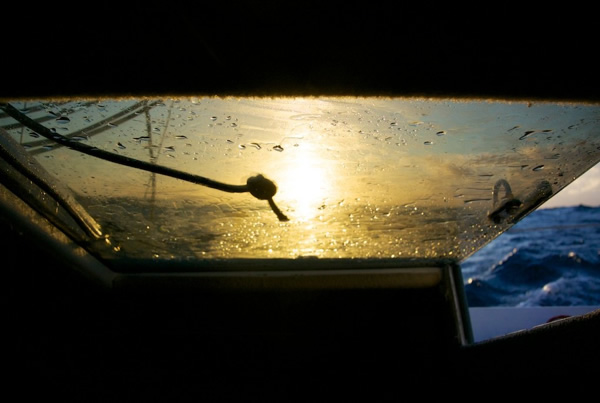 A distressing trend has emerged from my immediate post-passage entries. Instead of reporting how great the sail, I report how hard. I regret to do so again; but in some ways the sail from Apia was the hardest.

Much of this is due to my decision to sail first to Hawaii. Had I not done so I wouldn’t have met a couple of good guys named Dave, been called ‘a beast’ and ‘the hard core guy’, and enjoyed the hospitality of the Waikiki Yacht Club. But it did have an unfortunate subsequent effect on wind angles. Had I been sailing from Bora-Bora to Tonga in the same conditions I experienced from Apia to Tonga, the wind would have been well aft and GANNET sailing splendidly and stresslessly fast.

I have never believed much in weather windows. I don’t want to leave with a bad forecast, but I have observed that you never get any closer to your destination if you remain tied to the dock. (That reminded me of how I knew of Admiral Grace Hopper, after whom the U.S. Navy vessel which approached me out of Honolulu was named. I quoted her in the front of one of my books. “A ship in port is safe, but that is not what ships are built for.” An admirable Admiral.) I have deliberately left in a gale when the wind was likely to remain under forty knots and behind me. That on RESURGAM and THE HAWKE OF TUONELA was just good sailing. However this time I did leave in a ‘weather window’. Twenty to twenty-five knots between Samoa and Tonga were forecast to decrease to fifteen. Except it didn’t.

Title thanks to Missy Elliott.