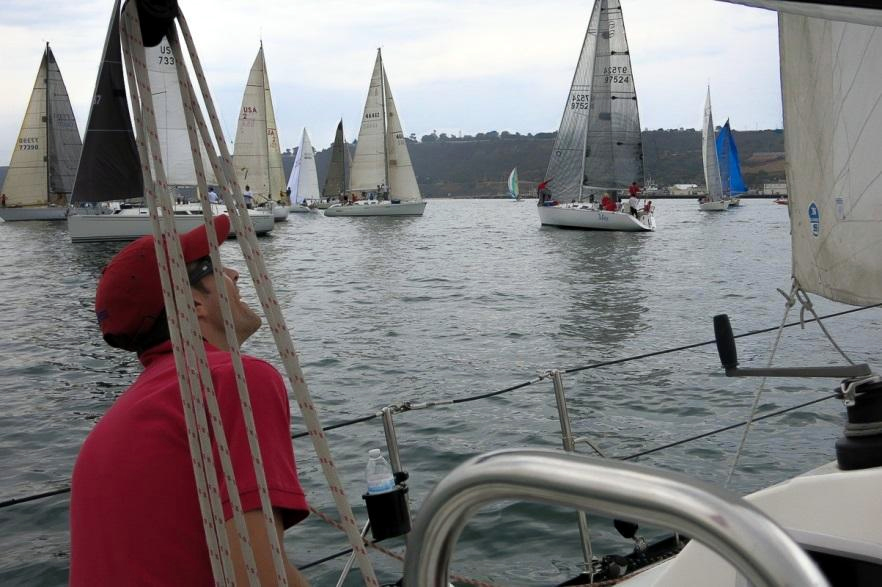 On Saturday, August 2, SWYC brought its version of the legendary San Francisco Three Bridge Fiasco to San Diego ‒ the Three Mark Fiasco! The unorthodox course was designed for sailors looking for competition with an edge: start either direction, round three marks in any order and in either direction, then finish from either direction.

The SWYC Three Mark Fiasco was a pursuit start race with 66 entries for this year’s inaugural event. This fun and challenging race was modeled after the San Francisco Bay race, which is one of the largest yacht races in North America with over 350 boats competing. Imagine lots of boats going in all directions with no one knowing for sure which way the boats will go until they cross the line. But unlike San Francisco’s version, which is limited to single and double-handed entries, full crews were encouraged and welcome to participate. In addition to the regular PHRF classes, several of the local yacht clubs and racing associations entered classes in this new SWYC event.

This year’s 12-mile course started and finished near buoy 17. Boats had to round buoy 11, the FM19 mooring, and the middle piers of the Coronado Bridge, but they could start or finish in either direction and round these marks from either direction. This interesting course was a navigator’s delight, raising interesting questions. Will the order of legs affect distance? Which leg is best during the early wind and current, and which is best during the later wind and current? How will the order of marks affect the point of sail, and which angles does the boat prefer?

To add to the challenges, Saturday’s unseasonable weather (not the normal sunny 75 degrees) was appropriate for a race with fiasco in its name. Light wind dotted with occasional gusts and intermittent rain provided racers additional opportunities to test their strategy and patience. Local knowledge of the effects of topography on wind and current became even more important. Lots of strategy at play!

So what were the right choices this year? Well that question led to lively and fun debates at the post-race party at SWYC. The numbers show that, overall, 36 boats started north and 30 started south. But among the top-finishing boats, only 5 started north whereas 13 started south. While most of this year’s top-finishing boats picked a south start, many racers were still touting the benefits of a north start as they planned their strategy for next year. Debates will continue until next year’s race when there will likely be even more boats and entirely different weather conditions.
– Jeff Rodriguez.

save of a lifetime