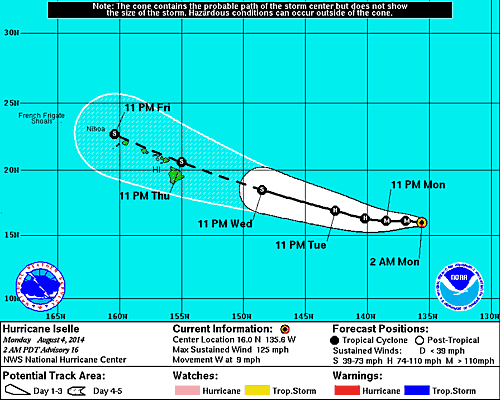 Hurricane Iselle’s forecast strength has increased over the past 12 hours to over 100 knots currently, and she looks set to roll straight through the Hawaiian islands in the middle of the week.  Now’s the time to pull boats from the water and batten down everything, though it might not be as bad as it looks.  We go to SA Hurricanologist “DryArmour” for the morning update (and stay on the “Boiling Pacific” thread for the latest):

Overnight Iselle has improved her structure and cloud tops have cooled.  There is still some debate over whether Iselle has formed into an annular hurricane but in my mind there really isn’t much to debate. The shape is symmetrical, there is no real banding outside of the tightly wrapped core of cold cloud tops and dry air does not appear to be making much of a difference to this storm as it pushes through the dry environment surrounding it.

The new shift to the north in the model consensus is good news for Hawaii as there is  a finger of significantly cooler water in the path as the system approaches the Big Island of Hawaii. A forecast of increased shear should also impact the tenacity of this hurricane but as mentioned before, annular storms can often defy the models and maintain a robust internal structure despite environmental conditions that might normal cause weakening or dramatic weakening on a traditional hurricane. My fingers are crossed that once again Pele is watching over the islands and her people and will cause the system to substantially unwind before going over the islands later this week.

the fist of god