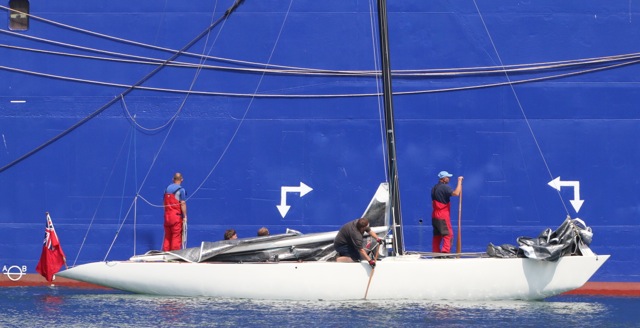 Feock is an idyllic place just up the river from race central here in Falmouth. At this point, after two days of no racing, I would rather be hanging out in Feock with a pint of Cornish Knocker and a pasty listening to the BBC news drone on about all the weather that’s hitting the U.K. everywhere except here.

We started racing the Europeans on Monday after a fantastic British Open Regatta on Friday and Saturday. All hopes were for much of the same as long as you didn’t spend any time looking at the weather info.

After a 6+ hour delay we finally raced on Monday and got two races in. The PRO, feeling the pressure to get the fleet sailing had us up against the cliffs in a heavily slanted course that even after a weather mark change became a parade.
Aboard US 83, Llanoria, we had what we thought was a stellar day. Taking a close second to Matt Brooks’ Lucie in race one (later to move into first after a Lucie DSQ) and winning the second race only to find out when we hit the dock that we were scored OCS, along with the other US boat, Flapper.

Being over early is a part of yacht racing, we all know that. However, the fact that the RC has chosen to not hail over OCS boats, even when there are only apparently two of them who were quickly identified, is pretty ridiculous, I was told that at ‘prestigious regattas boats are not hailed’. Apparently, we have not attended a prestigious regatta before. Our opinion is that in an era of more inclusive RC radio communication, hailing over early boats needs to be done, especially when it’s only a couple of boats. The RC representatives gave us their reasons, which we respect, and also understand that nothing will change for this regatta.

After no racing yesterday, at the competitors briefing this morning we were told to head out in a blistering 2 knot southerly, turn right for three miles and get ready for what we have named the ‘Lizard Nudge’. Well, we got to the race area, known as Race Area Barf (not on the charts) and proceeded to roll wildly in no wind and six foot swells for a couple of hours. At one point, we were planning to go by the RC boat and do a synchronized crew vomit to let them know that this was really not working for us, especially after a night at The Chain Locker.

Instead, we threw the anchor out and held fast. This seemed like a good tactic applauded by Rod Davis on the Sophie 2 support boat and one several clueless boats who just drifted towards the rocks decided not to do. They were later rescued because hoisting sails to get your boat off the rocks is simply not the done thing.

The fleet was finally moved into smoother water and then sent back into the harbor while the RC bravely sat by Black Rock watching the multitude of occluded puffs and cluster chop filter in and out.

We were in a convoy with Flapper’s Protector, Flapper, us, and the very Canadian team on Blade Runner. Instead of opting to go back into the harbor we dropped anchor in Shag Bay to have lunch. This was one of the highlights of our week as we got to witness one of the only sports the British do well in, apart from sailing: Snogging.

Yes, we got to watch top shelf, elderly snogging and were wondering if there was a Benidorm division featuring the best orange tan. Either way, it helped pass the time.
We then headed into the harbor only to be told to get the Feock out to the race course. Off we went and to the PRO’s credit, it did look like we were going to actually get a race in, briefly. However, it quickly died and any hopes for a race were dashed..

There are a number of support boats for this event. RC boats and tenders for probably 6-8 boats. The race committee asked that these boats help with towing the fleet when needed. When the RC finally abandoned racing for the day one team stood out – Scoundrel One. They worked their way away from the fleet and then hooked up to their tender and left the course offering assistance to no one. They win the award for worst and most unsportsmanlike team at the event and they must be very proud. I was hoping the RC would mention this in the morning but figure having a million people read what selfish knob heads these guys are will make them and other tender drivers think about their actions. Congrats, Scoundrel One, on your first Snapper Award.

We are hoping for some breeze tomorrow and Friday (the extra race day) and that the RC are planning to run as many races as they can and not yield to social events pressure. We came here to race and given two days of nothing, the competitors, and I’m sure the PRO Chris Hadden will want to have a successful event with the maximum races as possible. Fingers crossed for breeze! The awesome photo thanks to Dana E. Olsen.

started from the bottom