other than the horse piss, it was awesome

Phil Sharp takes you on the new Seascape 27 on their double-handed Chicago to Mackinac race. Enjoy…

Long distance challenges are always something that get me excited, particularly in offshore, short-handed configuration. My first significant ocean experience was competing with a prototype in the 2005 Mini Transat, racing single-handed from France to Brazil, where I got to know fellow competitor and Slovenian skipper, Andraz Mihelin.  Having helped develop the new Seascape27 yacht, and an opportunity arose with him to take on the double-handed class of the world’s oldest and longest annual freshwater events, the Chicago – Mackinac.

Not only would we be competing in the double-handed division, something we hadn’t done since the Mini Fastnet 2006, but it would also be interesting to get behind the tiller of this little lightweight rocketship.  Being the smallest boat in a fleet of 300, you can’t exactly consider racing for line honours, but our objectives were to win the double-handed division and find out what a serious US Regatta is generally all about.

Logistics for this race were not commonplace, and raised quite a few eyebrows from members of the Chicago Yacht Club. I flew from in the UK, Andraz from Slovenia, and the owner Svein Hubinette brought the boat from Lake Champlain, some 900 miles away! Needless to say we were one of only a few oversees entries.

Our double-handed division was first to start, and in very light reaching conditions the J29 “Relentless” in our class, headed off with very similar speed.  It became immediately apparent that a class win was not going to be as straight forward as we’d hoped, particularly as we had to complete the race 10% quicker than the J29 in order to win on corrected time.

For the first half of the course we followed our routing strategy up the west side of the lake, staying close to the Wisconsin (west) coast, which we hoped would give us more pressure by avoiding the centre of a mini high in the lake.  As well as taking advantage of the increased gradient and thermal enhancement on the coast, we were also hoping to put ourselves nicely west before the wind shifted to the south, in order to give us a good angle of approach to the Islands of Manitous at the top of the lake.

This strategy didn’t exactly turn out to be a ‘slamp-dunk’, with a large proportion of the fleet opting to instead follow the rhumb line, with a reasonable level of success, finding more wind in the middle of the lake than forecast.

One unique feature of this racecourse which we hadn’t noticed in the guidebook was the severe quantities of flies on the lake. Whenever the wind was below about 15 knots, swarms would descend on the boat, and always seemed find an area to bite into that you’d missed with insect repellent.  However their bites did have the advantage of keeping you awake when you were just starting to drifting off at the helm , a common problem when short-handing it.

Inevitably when sailing double-handed you have to sacrifice quite a lot of sleep.  We had a very basic autopilot and so where driving the whole time, changing every two hours.  By the time the person off-helm had done navigation, helped with manoeuvers, sail changes and also found time to eat, there wasn’t really time for more than 3-4 hours of sleep in every 24.

For eating during the race we took a Jetboil for a stove, mounted in a gimballed frame for cooking hot pasta meals.  It wasn’t until we started the race however that we realised it didn’t have a self ignition system, unlike all the ones we’d used previously, and that neither of us had brought a lighter.  So we had to wave goodbye to any chance of a hot meal, tea or coffee, and instead ate cereal the whole race, which fortunately we’d brought quite a lot of. 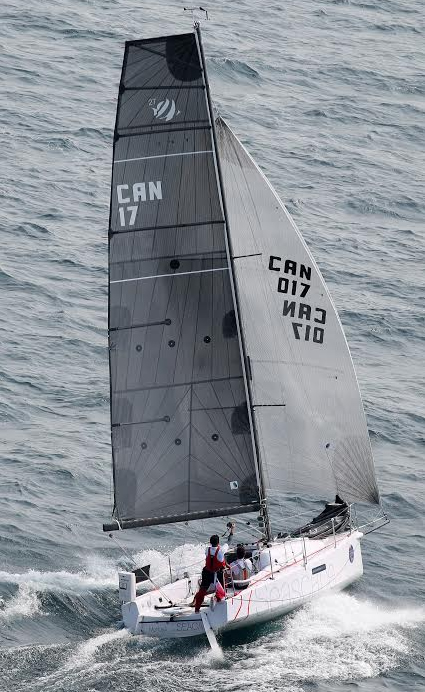 The last few hours of the race saw the wind increase to 20-22 knots, and the boat really came into its own and enabled us to start doing some serious overtaking.  Being a light and very stable design, a fractional a0 for reaching conditions gave us some impressive average boat speeds of 14 to 15 kts, which just showed how much power this boat can harness.  Wind gusts are turned into rapid forward acceleration instead of just heel, which is a sensation that brings a serious smile to your face if you are lucky enough to be driving. That’s us hauling us thanks to Boatpix.

The Isle of Mackinac is an interesting place to finish a race to say the least. Cars are banned on the streets and instead, horse and carts fill the main roads, with beautiful greens and mansions watch over the main harbour – not to mention the colossal Grant Hotel where the race party was held.  It was like a fantasy island from the past that had been frozen in time for the last 100 years, and presented an extreme and refreshing alternative to the skyscrapers of Chicago we had left behind.  Perhaps aside from the very pungent smell of horse urine that also floated around the streets.

Being an ORR race, we of course had to wait for our result to come through on corrected time, and were happy to hear that we had finished in first place, just 12 minutes ahead of the J29.  This was particularly satisfying based on the fact we’d been sitting in second for most of the race.

With this mission accomplished, it’s now back to Europe to continue work on my Vendee Globe campaign.  I’m particularly excited to be developing some innovative new concepts for a new IMOCA 60, including a zero-emissions energy systems that must be totally regenerative, but also very light.  But before I leave this country I must first check out the lights of Chicago – it would be rude not to.

Some facts of interest about our race:

down by the river

you won't win any races that way