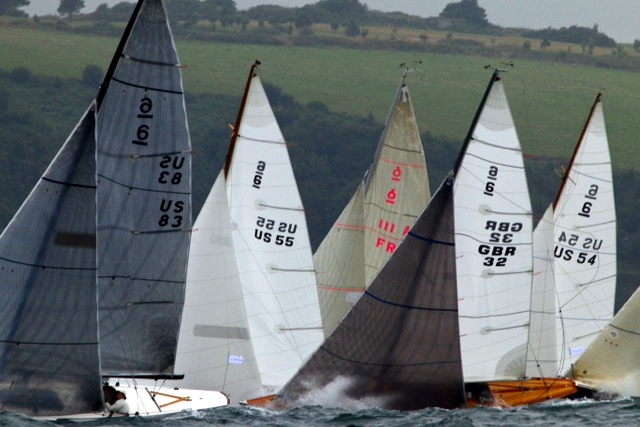 The 6 Meter British Open – which is the precursor event to the Europeans – wrapped up on Saturday. For those of you who think 6 meter sailing is all about rich coffin dodgers sitting in the back of their boats yelling unintelligible commands to the minions, you are partially correct, but the boats are sailed by top crews with all the latest gear and are minion free.The fleet is all about affluence and a quick glimpse at the docks shows finely tuned boats with all the go fast gear and your stereotypical pone ass crews trying to look like they are all doing something important because they have to.

Day one’s racing was held under conditions that would have made my PNW friends proud. Multiple shades of grey and haze made marks hard to spot and considering the leeward end of the line was bordering on French waters, there was no hope of any VHF calls on over early boats which meant a conservative start unless you were French.

The RC have been very proactive on the radio but will not list over early boats. This is how it’s done in Cornwall and we will live with it.

After day one and two, it was apparent who were leading the division charges. Valhalla and Llanoria (with our very own Snap looking like he knows what he’s doing!)  in their respective divisions.

In the moderns, Battlecry showed that sails that are not carbon fibre but carbon dated can scare the pants off the fleet. This boat is unusually fast off the wind and has a Game Of Thrones spinnaker, which mesmerizes and terrifies the fleet.
In the classics, the top dogs are Llanoria, Gallant, Flapper and Lucie, all North American boats. We will see how the Brits and other Euros respond after this weekend.

The European Champs start on Monday. Best of luck to all teams! Photos thanks to Dana E. Olson.