Kevin Hall also jumps into the world of foiling. It is a deep pool. Brought to you by Mauri Pro Sailing.

Having a vision is one thing. Making it happen is quite another. The Edinburgh Festival in Scotland and Burning Man come to mind as gatherings which must have started as a vision. Kudos to Luca Rizzotti, Andrea Ratti, Domenico Boffi, and their many teammates for creating a world first: The Foiling Week.

The Foiling Week on Lake Garda could easily become the mecca of modern sailing and design.  The enthusiasm from organizers and participants matches the grandeur of the vision perfectly. I hope sponsors are already climbing over each other for next year’s event. They should be.

A spectacular destination, perfect launching facilities, reliable wind (usually), cutting edge designers, and top sailors came together this week at the Malcesine Fraglia Vela. The passion in the air was so thick you could cut it with a foil.

The morning Symposium featured legends of the sport, past and present. Martin Fischer, Tom Speer, and Andrew McDougal are household names in foiling circles. Those circles are rapidly expanding.

Martin Fischer gave the keynote speech the first day. He talked about the 5 main things you need to sort out to foil consistently: Lift, Heave Stability, Pitch Stability, Sufficient Robustness for the conditions, and, well, money.

Tom Speer gave the keynote the second day. I will be re-watching it on the Foiling Week stream archives with a copy of the graphs as soon as I get a chance. He presented his investigation of the design space of A-cat foils. The primary assumption was that the windward foil will remain down. This means the tradeoffs are very different to those on the AC72. What interested me the most was his process of reaching the conclusions he reached. The conclusions themselves are pretty interesting too.

Andrew McDougall gave the keynote the third day. He took us through the development of the tools he has used to design cutting edge sailboard sails and moths for the last 30 years. He’s out on the water in his moth as I write this. I’m certain he still has a trick or two up his sleve.

The history of foiling leads to James Grogono. “Grandfather of foiling”, “legend”, and the “wrote the foiler’s bible” were bandied about the conference. It is less known that the US Navy achieved 30.6 knots in a boat called Monitor in 1956. James, ever the gentleman, opened his talk with this fact. 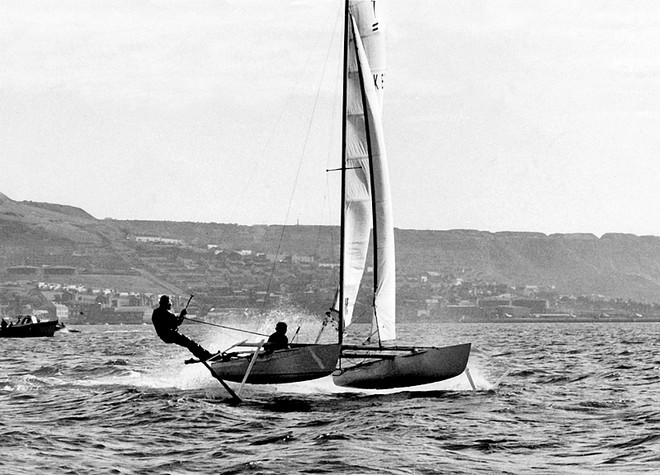 James designed and built Icarus. It was first launched in 1972. Get a tornado, bolt some outboard surface piercing foils on at a 45 degree angle, get 10 of your best friends to help you carry it into the water fully assembled, and off you go.

From 1972 to 1985 James improved the performance of Icarus from 21.6-28.15 knots. The resemblance of the configuration of the final iteration of Icarus to Hydroptere is uncanny. As I learned more about heave and pitch stability from Martin Fischer and Tom Speer, the Icarus/Hydroptere solution became less mysterious. No less wonderful.

In the boat park there were craft ranging from foil boards to GC32s. The important thing about the many different platforms is not how they were different. We were brought together by the common joys of flying above the water instead of sailing on it.

Foiling conversations very often end up in discussions of cavitation, ventilation, or both. I think I still mix them up if I haven’t had enough beer.

Cavitation happens quickly, like the pain when the dentist first drills your tooth. The cavity is a little area of boiling water on the upper side of the foil where the pressure is lowest. It disturbs the flow and causes trouble.

Somewhere around forty five knots, give or take depending on the section shape of the foil, the same low pressure which makes the boat fly also causes the water to turn to vapor. A cavity of vapor forms there, and the next bit of water has to go around it. No good.

Ventilation is when air gets sucked down the foil from the surface and creates an air bubble which disturbs the flow. Think of a kid blowing bubbles in his milk with a straw. Those bubbles stick around for a while. The top of the milk is not a smooth surface. In the Bladerider moth this was especially bad gybing from port to starboard in cold water. The rudder would pass through the wake of the wand and could easily ventilate. It feels a lot like catching weed. The thing still works, it’s just really draggy.

In this context, there are three categories of foils. Subcavitating foils, base-ventilated foils, and super-ventilated foils. The second two use the word “ventilated”, but they’re actually all about avoiding cavitation.

Subcavitating, or “wet” foils are what most of us are used to looking at. Like a regular airplane wing.

Base-ventilated foils are a big part of the solution which allowed the Vestas Sailrocket to reach speeds of 65 knots. They are shaped more like a wedge. The foil is designed so that air purposely becomes fed to the foil in just the right place. Cavitation can then either be mostly avoided, or the vapor pocket can be delayed until an area behind the foil. The second one is the fastest. The downside of this type of foil is it only works in a very narrow range of angle to the water. Not great in big waves. The other downside is the successful ones tend to be kept a secret. For good reason. Making it work is no small feat.

Super-ventilated foils are designed to keep themselves sheathed in air so that more air doesn’t bother them. They have more drag than base-ventilated foils. They are the happiest of the three kinds of foil above water-boiling speeds or in rough conditions. Designers use the word robust.

The C-FLY project is a catamaran with diamond foils on the bows. It’s a successful concept-proving boat. Their goal is to break ocean going records on foils. The sea-keeping characteristics of their design and the prototype here are notable. The idea for this design is consistent reliable lift through seaway, not top speed in flat water. It’s important to remember that the goal is to keep the air attached. The water moves around the air. The most amazing thing about their super-cavitating foils is what they look like. They have 5 ten millimeter steps down along the top edge of the foil. It’s rather counter-intuitive.

I understand another hat has been thrown in the ring of ocean-record foiling pursuits. Vestas Sailrocket 2 and Paul Larsen and his team have similar plans to sail across oceans above the water the whole way. Maybe one day we’ll see them on the same course.

More familiar looking to fans of the AC72 is the GC32. Designed to fit in a trailer you can tow behind your car, and to be rigged and launched without a crane, and to easily take sponsors for rides, yesterday they hit 37.8 knots on the lake. The GC32 may also be evidence that the design space of practical foiling catamarans is converging. It has the same length to width ratio, and the same exact daggerfoil rake range, as the AC62 Class rule. I suspect it will be hard for a person such as a Melges 32 owner to go back after getting a ride on a GC32.

The best thing about The Foiling Week was being under one roof. The joy of investigation and discovery, the step-change in performance brought by foiling, and the passion which comes from sharing these things face to face.

half the boat i used to be

Out With The Old