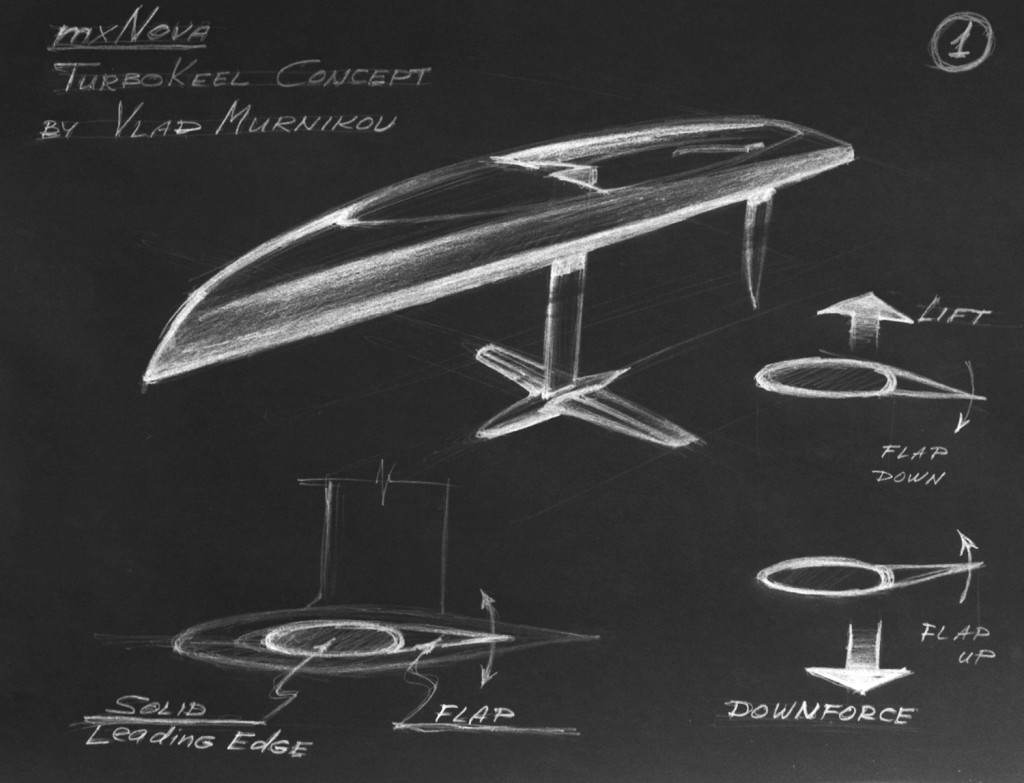 Brian Hancock tells us the offshore SpeedDream is on hold for the moment, though they’re still busy over in SpeedDreamland; Here’s a look at something entirely different from outside-the-box designer Vlad Murnikov – the mxNova.  From Brian:

SpeedDream is about innovation. It’s our touchstone yet it doesn’t have to be as radical as a Flying Keel or a wave piercing bow and stepped hull. In fact, we have been working for a while on a classic racing keel boat, something that nobody has taken a fresh look at for a very, very long time. We are calling the project mxNova.

The iconic Star is well over 100 years old, and the Dragon is not much younger. More recent designs, the Etchell and Soling, are closing in on a half century since they were introduced. All of them have provided decades of glorious competition and spawned some of the world’s best and best known sailors; guys like Dennis Conner, Russell Coutts, and Lowell North, to name just a few. In no way do we think that mxNova is going to take away any of the illustrious accomplishments of these classes, but we do think that it’s time to take a new look at keel boats and bring in some fresh ideas.

Most recent keelboat designs are more ballasted dinghy than they are classic keelboat, intended to sail flat and relying on the crew for righting moment. We became curious as to whether there was room in sailing for a truly modern keel boat, a boat that is long, gracious and narrow and intended to sailed heeled with the ballast keel providing the power rather than bodies dangling over a lifeline.  The result is the mxNova prototype.

Naturally, the boat features SpeedDream’s signature wave-piercing bow which gives way to a pleasantly narrow hull. There is nothing extraordinary about the design other than it’s thoroughly modern, even slightly futuristic. There is ample sail area with a square top mainsail that can be easily twisted off to depower in the puffs. The rig is simple and does not require complicated running backstays. All in all you have a powerful boat that is easily driven, which is in itself is not revolutionary, but that’s until you look below the waterline.

mxNova does not have SpeedDream’s Flying Keel; instead she has a keel that can make the boat fly – or at least, change its displacement substantially. 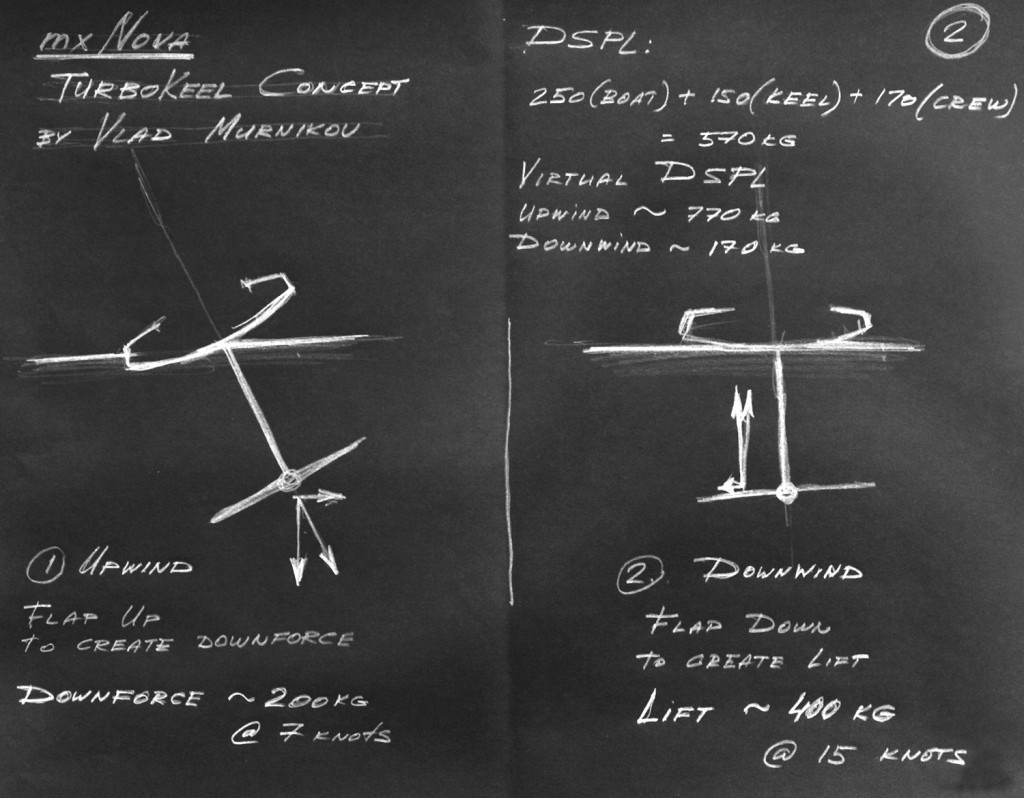 Attached to the bulb of a normal looking fin keel are two transverse wings. On the trailing edge of each wing are adjustable flaps similar to a trim tab sometimes found on the aft end of a keel or rudder. Their purpose is to turn a symmetric foil into an asymmetric one thereby creating either down force, or lift when the boat sails upwind or downwind respectfully.

In the upwind configuration the flaps are up which creates a downwind force. This force ‘sinks’ the boat, providing ‘virtual displacement’, more stability and, by extension, more sail carrying capability. The opposite is needed when sailing downwind. With a control similar to one found on the Moth dinghy you adjust the angle of the keel flap to make it point down. The effect provides lift which in turn reduces displacement just when you need it. This minimizes drag and increases the boat’s ability to plane. This simple mxNova feature brings the classic keel boat into the 21st century and provides a great tool for competitive sailors to maximize its performance.

That’s the theory, but to make it work would require a lot of work – and money – and before committing to developing the new design we would like to hear back from the sailors of all stripes whether it’s worth it or not. The attached renderings are here to inspire conversation.  What do you think?