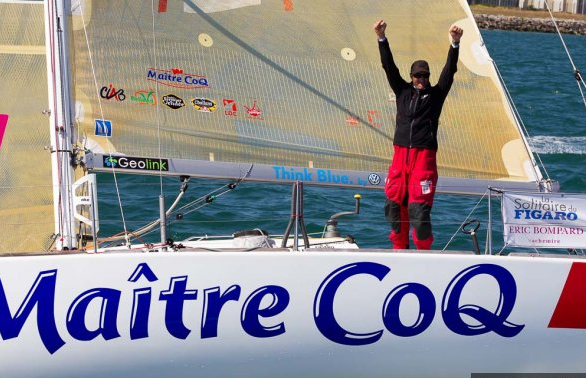 With all of the racing news that SA has published in the past 24 hours, we’d be off our game to not give Maitre Coq skipper Jeremie Beyou some love. The 38-year old has just claimed overall victory in the 45th edition of La Solitaire du Figaro for the third time, writing his name into the history books alongside the likes of Mich Desj and Jean Le Cam. After four stages and nearly 2,000 miles of sailing In virtually every type of wind and sea state, Beyou stuck to a long-term game plan and finished on the podium of all four legs. En route to winning the final leg and securing his own fate, Beyou methodically covered second-placed Corentin Horeau like butter plays toast to win the overall by 18 minutes. Looks like young Corentin may have learned a few things from the master himself, Desjoyeaux, after sailing with him in this spring’s Transat AG2R.

The race was riddled with drama as leaders faltered, not once but twice with rigging failure and dismasting; a pressing issue within the class. Again providing the closest ocean racing you’ll find, the Figaro class is seeing explosive growth and investment in young English talent, mostly supported by Artemis, and the English talent pool runs deep. A hard-charging and relentless Sam Matson barely got beat for top rookie honors by former Mini champ Gwenolé Gahinet to finish 15th while a humbled Sam Goodchild was next best Brit, finishing 22nd overall after a stellar performance last year. With a quarter of the Figaro fleet now British, and with Artemis graduates getting their hands on GAC Pindar money, regional based sponsorships and more, it’s only a matter of time before we see some fresh, young, built-from-the-ground-up English Figaro talent come up through the ranks to find the necessary resources to move into the IMOCA class.

As for Beyou, the man continues to prove why his long-term sponsor Maitre Coq, a frozen-chicken producer, happily backs him and why he has Armel’s old Banque Pop Open 60. With another year of practice and training and a TJV podium-finish under his belt on the new steed, we can’t wait to see Jeremie face off head to head against Francois Gabart, Vincent Riou and the rest of the IMOCA regulars in a star-studded Route du Rhum race this November where SA will, of course, be live at the start. – Ronnie Simpson.