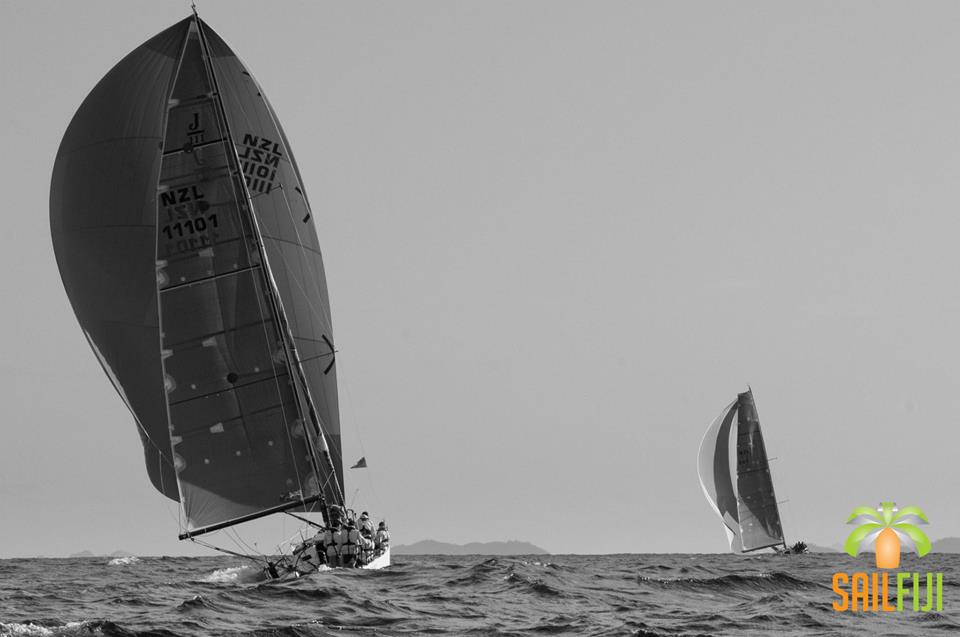 Our old pal Andy Pilcher from Doyle NZ checks in from aboard the J/111 Django after one of the most exciting ocean racing finishes of the year.  A great yarn from an excellent group; check out the Auckland-Fiji Race results over here. Photos from C Brad Davies/LiveSailDie Media.  Title appropriate to the best song the Beach Boys ever wrote.

Who remembers the 1995 Rugby World Cup Semi-Final between the All Blacks and England?  The one where Jonah Lomu ran rampant right through the whole team and scored four tries, including that most memorable one where he bowled right over the top of Mike Catt?   Keith Quinn, the veteran broadcaster with decades of experience, was so lost for words that all he could say – live on air – was “Jonah….. JONAH…..Oh!!!……Oh!!!!!”

That’s what we were looking at during the Auckland Fiji Race after almost 1400 miles and nearly a week of racing.  Two middleweights standing toe to toe, slugging it out, neither giving an inch.   In the White corner we have Django Racing, the younger, better looking of the two, dancing and jabbing, sticking and moving, trying to wear their opponent down.  In the (toxic) Lime Green corner, the clever old veteran, gnarled by age and years of fighting, and looking, searching for the knockout blow.

The bout started off in a typically brutal manner, with both fighters taking a beating during the first four rounds (days).  Eventually things calmed down a bit, and a searching, tactical battle was underway.  Django scored the first major points with a swift left hook, right across Squealer’s nose, early in the fifth.  They thought this could give them a decent advantage, but you don’t get to be older and wiser without learning a few dirty tricks, and sure enough, the pugilists from Tauranga Bridge Marina eventually wore them down and scored a few back themselves.   Deep into the sixth round, the fighters got up close and personal after fighting blind for most of the bout; after that, it was all on!

The teams stood right in each others faces, neither one wanting to let the other slip away and gain an advantage.  No one let up, with stamina and endurance being pushed to the absolute limit. Both teams pushing harder than they ever thought possible, somehow finding reserves of energy they didn’t realize they had.   Squealer used all their collective years of cunning to gain an advantage late in the seventh, and it looked like this would carry them to a famous victory.  But Django wasn’t giving up that easily, and with barely a minute to the final bell pulled their last move of the fight, launching a straight right across the face of Squealer, seemingly dropping them on their arse for the final time.  Surely there was nothing left to give…but Squealer had other ideas.

They picked themselves up off the canvas and launched one final assault on the young pretenders.  Django tried holding them off with a series of jabs, but Squealer countered with a brutal right hook just on the final bell.   So who won?  Well, it took a while for the ref’s decision to come in and it was eventually announced over the public address system (also known as the VHF Radio) that Squealer had taken out the narrowest of points victories – beating Django by 10 seconds.   Both fighters fell to the floor, exhausted, before picking themselves up one final time for an embrace that lasted well into the night. 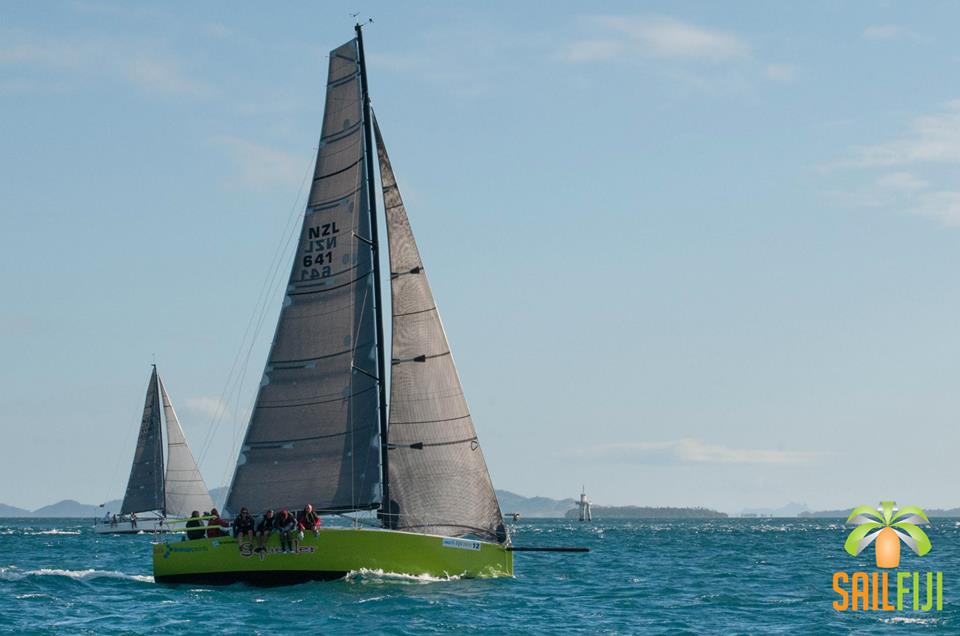 After a race that lasted just a few hours shy of a full weak and some 1370 NM, Squealer really did beat us over the line by 10 seconds. This photo was taken from the finish boat, showing their nose crossing the line, with us barely a boatlength behind.  It was hard to comprehend at the time what we were involved in, but for all of us, this was the race of a lifetime, and it was only more poignant because of the battle raging between two boats full of good friends.   I have known some of these guys for the best part of 20 years, and can genuinely say that we could not have hoped to be beaten by a better team.

For those that don’t know, the DDF Syndicate that owns Squealer is a team of seven mates, most of whom are old school friends from Tauranga. This is the third boat they’ve owned, over a period of around 15 years, with their ultimate goal of competing in an offshore race. That dream was cruelly cut down just 120 miles from the finish of last years race to Fiji, when the mast fell down as they were pushing hard for an overall win.  So to see the joy on their faces at the finish line really did make everything worthwhile, and (almost) made us forget our awful first half of the race!

Well done guys, it was an absolute pleasure trying to knock the shit out of you, and we cannot wait to do it again.