The Farr 30 North Americans kicks off at the Royal Van.  Report from Day One thanks to Carrick Woodfield.

With the forecasted gradient wind from the South the wind, in true Vancouver form settled in as an Easterly for the first race. The fleet of eleven Farr 30 yachts from Canada and the USA competing for the 2014 North American Championships were champing at the bit with two boats a little over zealous and OCS. 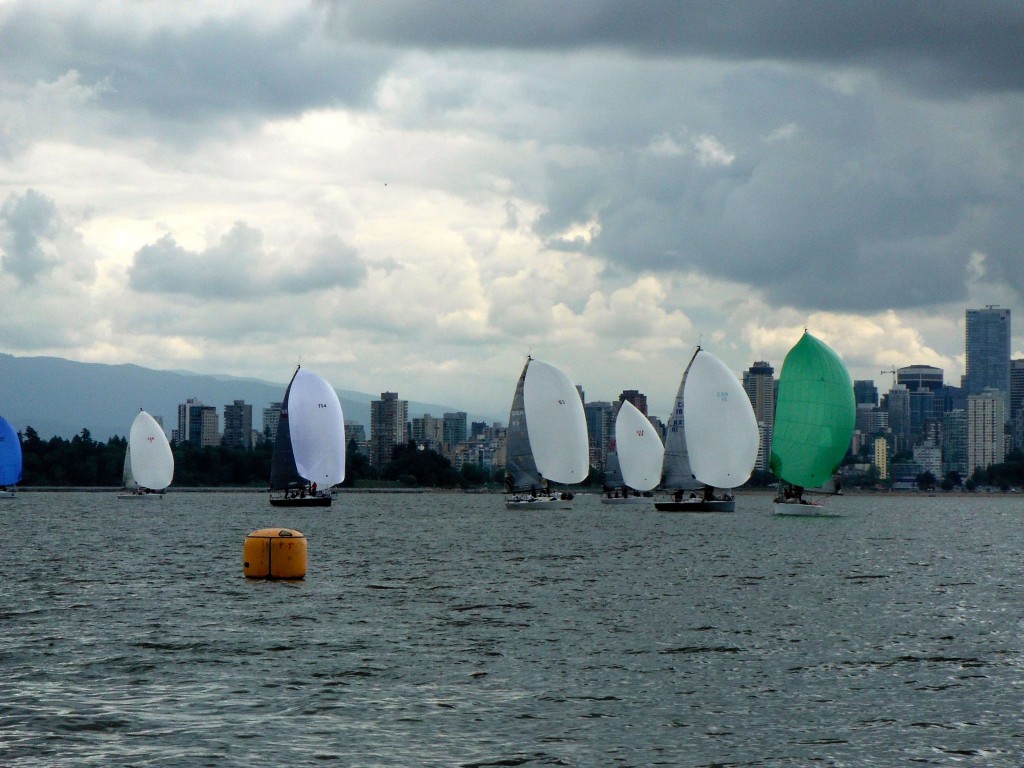 After two windward leeward laps it was Patricia, then Nefarious followed by a local Through. Time for the wind to do a 180 and build from the West! So up with the AP and anchor then head out toward Spanish Banks for the second of what would be three courses through the day. The wind filled in well from the west and the second race got underway with the fleet pushing the line. Nefarious crossed the finish first followed by Through and Project Mayhem.

Keeping the same course for race three the fleet lined up for the start and, with only seconds to go, the AP was called for and a restart was had. This time under “I” flag conditions. Patricia coming in first with Through and Spiny Norman close behind. At this time only one point separated the leader Patricia from Through in second overall, so the competition is heating up. To complete the tour of English Bay the race course was moved to the Northwest, the other side of most of the bulk carriers. Most of the fleet started to hold back from the line and headed out on starboard toward a ship now lifting anchor to cross the course. The ship fitted perfectly across the course between legs of the fleet adding additional challenges without issue. Through crossed the finish first with Patricia second thereby swapping the overall lead for the day and Deep Pickle came in third for the race.

No further racing today was signaled and off to the Royal Vancouver Yacht Club bar to find one protest and one request for redress. The protest was dismissed and the redress not granted. The overall results after Day 1 are:

With one point in it for the top two spots it will be light on the rum in the bar tonight. There is plenty to play for in the pack with places bound to change tomorrow, so pray to the wind gods tonight for solid breeze tomorrow. A new video covering most starts and finishes for the Farr 30 North American Championships is available on you tube here.