down but not out 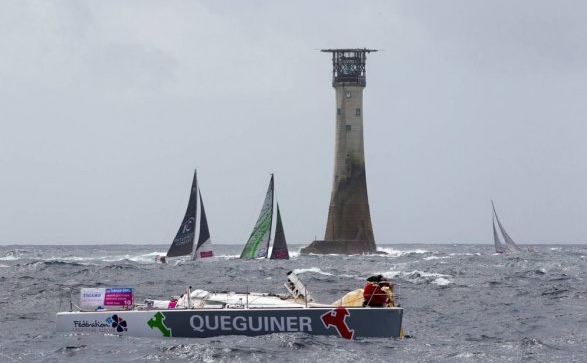 Two minutes after rounding Wolf Rock, off of Land’s End, La Solitaire du Figaro leader and two-time defending champion Yann Elies has dismasted after a starboard D1 broke at the swage end. Having repeatedly worked his way to the pointy end of the pack in a race that essentially re-started after 90 miles, Yann rounded Wolf Rock just 10 seconds ahead of second placed Charlie Dalin. Yann is recovering what he can, 86‘ing the rest and heading for port in Falmouth, England. If he can get re-rigged in time, he will be able to re-join the fleet with a two-hour time penalty added to the time taken from the fleet’s last-placed finisher. Let’s hope Yann can get things sorted and get back in the race. He did, after all, overcome a broken forestay to win out last year…

The subject of démâte in the Figaro class is a touchy one and we’ve reported on it before; inferior metals used by the one-source class rigging supplier, newly allowed sail materials increasing loads and more. We’re pretty sure this one is going to re-ignite all of the heated conversations about what can be done to keep rigs in these boats. In the mean-time however, a phenomenal first step of the 45th La Solitaire is winding down to a thrilling finish. Who will win? Hell if we know, track ‘em here and then jump in the discussion.

Photo thanks to A. Courcoux. with more here. – Ronnie Simpson.