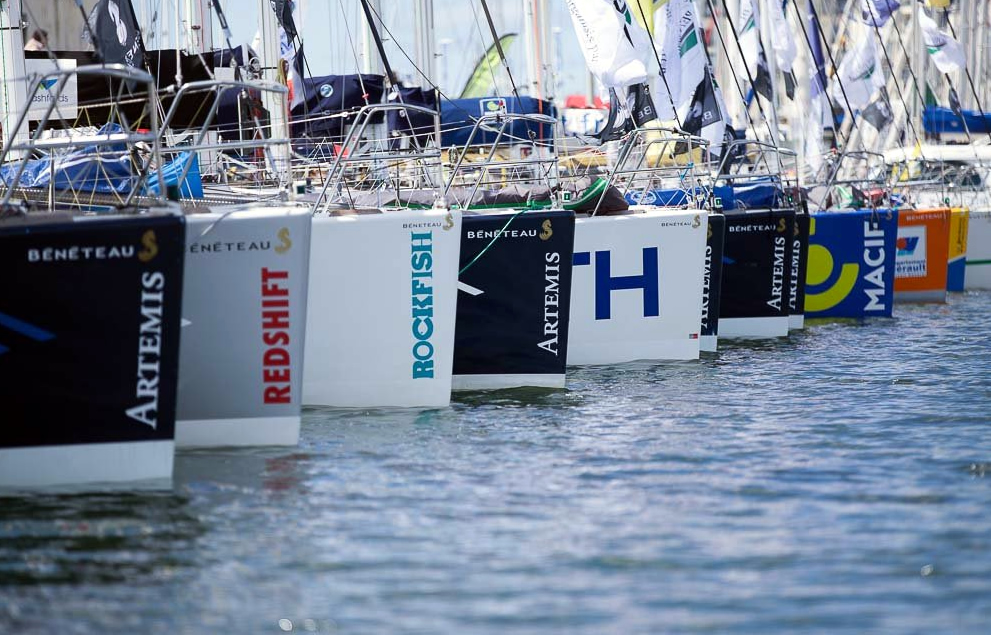 Ryan Breymaier and Pepe Ribes’ intense three-way battle for the lead of the IMOCA Ocean Masters’ New York – Barcelona race isn’t the only race tracker that needs to be in your browser this weekend. Enter La Solitaire du Figaro. The summer-time classic, now in it’s 45th edition, continues to be the world’s most competitive single or short handed race on the planet and this year’s race promises to live up to the hype. Where else can you find shit-hot up and coming young talent racing on a level playing field against the champions of today, the heroes of yesteryear and a handful of amateurs with a dream? With a relatively simple and affordable one-design platform that keeps numbers high an racing close, La Solitaire sends off another solid fleet of 38 boats this year to race a challenging course of 2,014 miles spread across four steps around the Bay of Biscay and English Channel.

The first step begins Sunday in Deauville, in Normandy and ends 484 miles later in Plymouth, squeezing in 3 English Channel crossings along the way, on what is a unique and uncharacteristic opening leg. The forecast is looking tricky, and in a place with big springtime tides and currents of over 5 knots in places, there are big gains, and even bigger losses to be had. Time the tides wrong and you’re literally spit out the back, if you’re unfortunate enough to not get an anchor down.  With a tactically challenging and current-intensive departure from the Bay of Seine and a fleet hungry to get out front early, La Solitaire should be vintage from the get-go.

Departing Deauville in forecast light air on the leading edge of a large low, the fleet’s first leg is 80 miles north, likely upwind, to “Ower’s” buoy east of the Isle of Wight, off England’s south coast. Leaving the buoy to port and then sailing 200 miles west to Wolf Rock, off of Land’s End, timing will be everything as the breeze is forecast to come from astern, before dying and gradually filling out of the ssw, setting up a port tack reach to the rock. Leaving Wolf Rock to port, the fleet will likely reach or beat southeast in a dying ssw breeze to the “Astan” buoy off northern Brittany, before crossing the channel a final time, sailing north for Plymouth, England and the finish.

Crossing every point on the compass rose multiple times and experiencing breeze of every direction and velocity from 0 to a forecast 20 knots, bearing in mind the massive spring time current shifts, the tactical precision and navigational skills required to run at the front of this big talent-rich one-design fleet is almost incomprehensible. This is why so many champions of the sport refer to La Solitaire du Figaro as the single hardest yacht race in the world to win. And this year will be no exception.

One of the biggest names in the class is also the owner of one of the greatest comeback stories in all of sailing. Enter Yann Elies. Breaking his femur while battling for the lead of the Vendée Globe in 2008, Yann spent several days stranded inside his Open 60 Generali, as it rocked and rolled in treacherous conditions down south, before being rescued by the Australian Navy some 990 miles southwest of Perth. Narrowly escaping a frigid, lonely death in the Southern Ocean, Elies has effectively risen from the ashes like a phoenix to reclaim his position atop the solo sailing world. Miraculously overcoming a broken forestay on leg three of last year’s Figaro to win the whole regatta,  Elies landed himself in the record books as the first person in the modern-era to win La Solitaire two years in a row. In Yann’s multihull debut, he won November’s Transat Jacques Vabre in the Multi 50 division. Yann is clearly not finished, having won last month’s Solo Concarneau by just 29 seconds after two days of racing against a stacked fleet of 32 Figaro’s. Can Yann Elies make it three wins in a row?

Besides Elies, smart money would be on guys like 2-time Figaro winner and Maitre Coq IMOCA 60 skipper Jeremie Beyou, also sponsored by Maitre Coq in the Figaro. Beyou won the race’s prologue and clearly does not appear to be affected by less time in the boat this year than his rivals. SMA skipper (and former MACIF Figaro skipper) Paul Meilhat has been on fire this season, wining the Transat AG2R and Solo Basse-Normandie in preparation for La Solitaire and has been sponsored by “Le Prof”, Michel Desjoyeaux himself. Last time Mich Desj took an up and coming Figaro sailor under his wings, it worked out pretty well for both parties.

Of course, you always have to watch out for regular Figaro front runners like Adrien Hardy, Erwan Tabarly, Thierry Chabagny and the über-experienced Gildas Morvan, who competes in his 19th Solitaire. This year’s fleet includes an additional dark horse in the form of past Vendée Globe winner and 1989 Solitaire winner Alain Gautier. Sponsored by Generali, Gautier makes his return to the circuit at 52 years young after a decade out of the scene. In 2003, Gautier lost to Armel Le Cléac’h by just 13 seconds after a month of battle, so last we heard, AG still got game… Throw in a handful of Mini aces and winners including Corentin Douget, Charlie Dalin and Figaro rookie Gwénolé Gahinet, not to mention several other top-tier skippers and there are literally 10-12 boats that could win this 45th edition of La Solitaire.

A promising sight to see is the well prepared and well-financed English invasion that the fleet has been seeing over the last few seasons, which has culminated in an astounding  nine English or Irish flagged boats entered in La Solitaire including a very promising six Britons amongst the fleet’s seven rookies vying to win the Beneteau rookie ranking. Unfortunately, they may all get thumped by Mini Transat winner and Transat AG2R winning co-skipper Gwénolé Gahinet on SAFRAN – Guy Cotten, who has to be considered the rookie favorite. Gwénolé will have his hands full with Richard Mason, Sam Matson and the rest who lead the British rookie charge as English sailors continue to make inroads into the class.

remember, it's dangerous out there