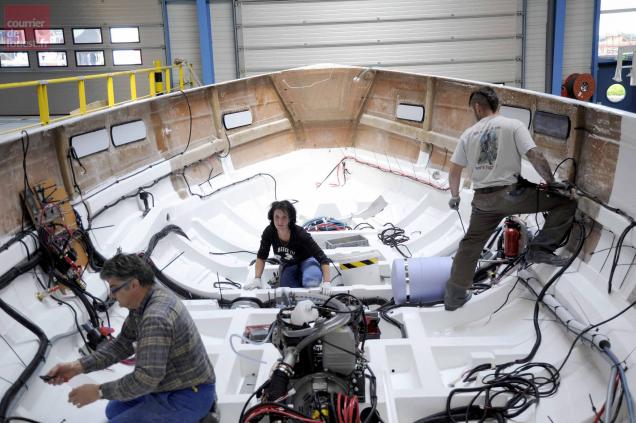 With the MAIB investigation proceeding apace (getting info from the SA forums, no less!) and a nation of sailors still shocked at the loss of the crew of Cheeki Rafiki, it’s a good time to look at what may very well be a growing problem; thousands of “performance” production boats – price point products – are now getting into their teenage years, and the vast majority of them may become death traps over the next few years without some serious maintenance.  Why?  Let’s go to SA n00b Jack_Sparrow for an excellent analysis and some suggestions.  From the marathon Cheeki Rafiki thread:

Something like this incident puts an unwelcome but necessary spotlight on production or “white boats” and scrutiny which may not necessarily be directed to limited production vessels experiencing the same fate. Hopefully something positive will come of it, as sudden keel loss is nearly impossible to properly and practically plan for and often involves tragic consequences.

I have owned and modified a number of older used Beneteau Firsts for offshore use over many tens of thousands miles and at times in very extreme conditions, all with no concerns. Using a production boat has been an advantage that has worked for me as custom/limited production built options have been outside my reach.

I have a number structural concerns attached to “white boats” after a period of use and particularly those produced over the last 15 or so years, some of which relative to initial outlay and outcome are easy to correct. For appendages, these concerns include:

1. The absence or minimal use of “integral” stringers in areas of high load and therefore the reliance on a structural hull liner and its method of connection to the hull; and

For instance, many production builders (like Beneteau with the 40.7) have moved away from flanged keel tops (incorporating countersunk/in-hex through-keel flange bolts) on the top of thinner foils in favour of now using cast-in keel bolts but still maintaining thinner foils. This also does away with the need for having a keel box built into the underside of the hull to take a keel flange. Also, the builder’s reliance on having to use “unrelated third parties” to complete the build/fix keels on this simpler interface (using sealant only, at builder’s direction) may have also influenced this design change.

This change from flanged to unflanged keel attachment results in a few problems:

2. A smaller or narrower keel-to-hull footprint with the resultant load transfer naturally between keel and hull structure being more acute in comparison.

In my opinion, anyone who has a production boat with a solid polyester GRP hull with a structural hull liner must (at some time and commensurate with boat use) give very serious consideration to addressing laminate and grid connection fatigue. This is simply about having a maintenance/refit program matched to original design and vessel use, both past and proposed.

Whilst doing that I would also do away with any central drainage sump recessed in to the top of the keel (like those on the 40.7 and others). This will allow the pan bottom to be built up to full thickness around the keel centre where it is transmitting maximum load and the hull/new reinforcement laminates carry through over the top of the keel without interruption where the sump was. In my latest First I found the hull laminate thickness was the thinnest either side of the sump, presumably done to assist bilge water flow to this sump!!!

The above modification should allay any concern that there is a potential weakness around the interface between the hull and this sump and which, amongst other things, may ultimately lead to water egress into the hull laminates at this location. Note: With that sump gone bilge drainage can be accomplished by having dual pump inlets inside the box sections either side of the keel and with small inspection ports on vertical webs to access those inlets and sponge dry either side.

Maybe in Cheeki Rafiki’s case it is a coincidence that what appears to be an area of laminate decolourisation (caused possibly by moisture) corresponds with the exact location of this bilge sump recessed into the keel.

I am not suggesting the above keel and shell reinforcement maintenance program may have done anything to change the shocking outcome for Cheeki Rafiki. However it has worked for me and I would highly recommend it to owners of “average white boats” of all vintages, particularly those of the higher-performance variety, and especially those who intend taking on potentially extreme conditions, in locations where they cannot rely upon others for assistance.

“Daddy, How Come Ours Doesn’t Have A Couch Like This?