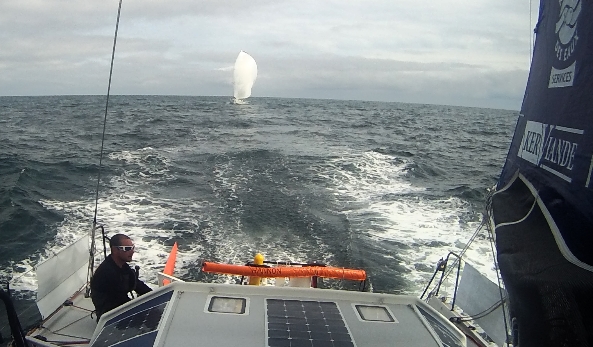 The double-handed Normandy Channel Race kicked off in Caen, northern France, on Sunday 25 May at 1400 hours local time. Competing on Class40s, which are becoming increasingly popular in the US as well as Europe, the original line-up of 17 duos set off on a sprint towards Ireland and back, via marks at the Solent, Land’s End, northern Brittany and back in Normandy. There are serious contenders vying for ultimate glory, but for the past 48 hours a couple of relative ‘underdogs’ have been blazing a trail way out in front of the fleet with some daring options that have paid off big time. The low-down here…

Among the main runners and riders in this 5th edition of the Normandy Channel Race are the winner of the last Transat Jacques Vabre and 2013 Class40 champion, Sébastien Rogues (GDF / SUEZ), Briton Miranda Merron and partner Halvard Mabire (CAMPAGNE DE FRANCE), Damien Seguin (ERDF – Des pieds et des mains), Jean Christophe Caso and Aymeric Chappellier (TEAM PICOTY – LAC DE VASSIVIERES), Yannick Bestaven, winner of the Transat Jacques Vabre 2011 and 4th in 2013, as well as Pierre-Yves Lautrou (L’EXPRESS – TREPIA), who is sailing with Thomas Ruyant, winner of the 1st edition of the race and also Route du Rhum and Mini Transat champion. Added to that, past Mini sailors make up a large contingent of this year’s competition with representation from TEAM WORK, with Bertrand Delesne, 4th in the last edition, and David Raison, winner of the Mini Transat 2011 and the naval architect responsible for the revolutionary scow bow Mini. Former Olympic pole-vaulter Jean Galfione is also returning to the event on TEAM SERENIS CONSULTING and he’s racing with a sailor who needs no introduction, Roland “Bilou” Jourdain.

It may come as rather a surprise then, even to the duo in question seemingly, Brieuc Maisonneuve and Rémi Aubrun on GROUPEMENT FLO, that a pair of ‘relative underdogs’ has in fact been leading the fleet by a significant margin since Tuesday evening. Describing themselves as ‘amateurs’, 39-year old Brieuc has had a very atypical career. He’s the manager of an industrial SME which boasts some 250 employees. He is a man who likes a challenge and he likes to win. He also happens to be an experienced sailor, who has competed in the Mini Transat (victory way back in 2003) and the Solitaire du Figaro. He’s teamed up with a high-quality master sailmaker by trade in the form of Rémi Aubrun, who himself has a fair old haul of more recent Mini and Class 40 accolades…

Their union has made for an explosive cocktail. On Tuesday night, with the fleet stalled around Land’s End, our duo really went out on a limb, sniffing out a vein of breeze an almost ridiculous distance from the direct course, which they followed up the Bristol Channel as far as the island of Lundy. They managed hold the pressure in their sails throughout the night to snatch the lead before rounding Tuskar Rock, south-east Ireland. It was a very daring option, but the rewards were high. At the radio link-up this Thursday lunchtime, Rémi was playing the modesty card. “In terms of our strategy, we had two plans at Tuskar Rock, the A and the B. I can’t tell you about A, it’s secret, but plan B… well it worked, to the east. When you have someone like Halvard in hot pursuit, you’ve got to crack on!”

Brieuc Maisonneuve (currently 1st), Halvard Mabire (3rd) and Louis Duc (10th), form a solid group of sailors from Lower Normandy, who have come together to create a Class40 training centre. Its long-term objective is to create a strong training base for racing sailors in Lower Normandy. They are convinced that the next winner of the Route du Rhum/ Destination Guadeloupe, due to set sail from Saint Malo, France, this coming November, will be a skipper from Lower Normandy.

However things pan out, the podium for the Normandy Channel Race 2014 could well be a sign of things to come in this year’s Route du Rhum… Keep ‘em peeled till the weekend here  and on Facebook.