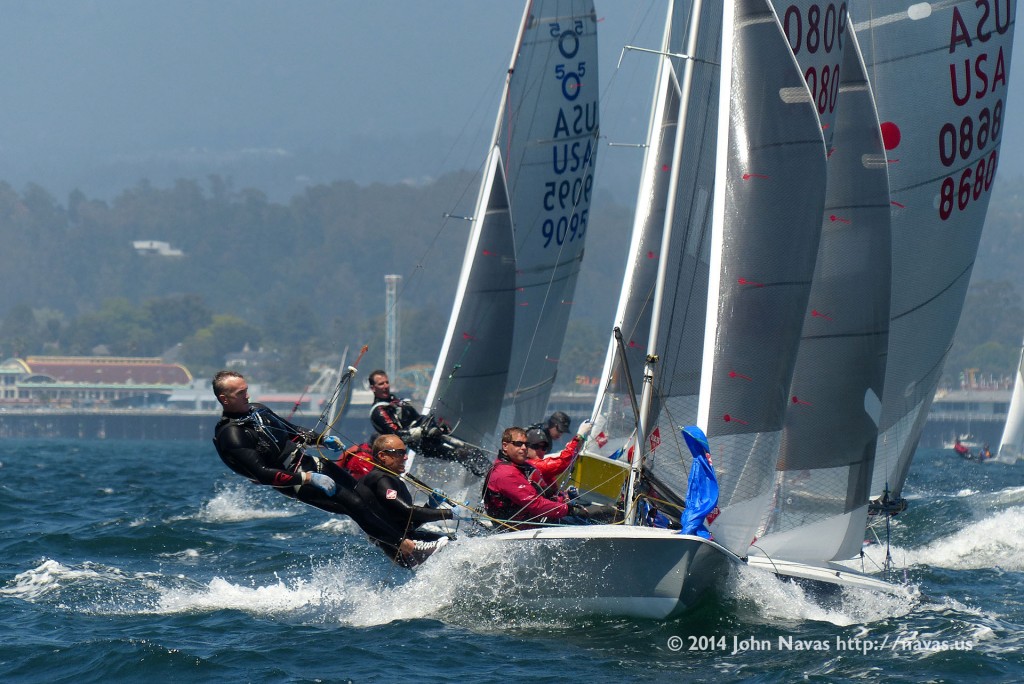 Craig gives us the day-by-day from last week’s International 5O5 North Americans.  Full results here, photo galleries here from John Navas, and get into the granular action on their Facebook Page here.

After a brief postponement to wait for the fog to clear, Day 2 of the North American Championship delivered two races in classic Santa Cruz conditions ranging from 18-28 knots. Downwind boat speeds approached 20 knots in the second race of the day as the top teams worked hard to keep their boat ripping and upright. There was some swimming and some carnage, including several broken rudder fittings and a broken boom. All boats should be back on the water tomorrow.

Mike Martin and Adam Lowry in USA 9106 won both of today’s races as they showed superior speed and boat handling. Mike Holt and Carl Smit in USA 9115 also showed great speed and consistency to finish the day with a 2nd and a 3rd. Howie Hamlin and Andy Zinn still hold the overall series lead, which now includes a throwout after 5 races. Other notables from the day were 505 rookie Michael Menninger and crew Matthias Kennerknecht as well as 45 year class veteran Jeff Miller and his crew Pat Diola; both boats finished the day with two top-5 finishes.

For those of you who don’t know, Mike Martin is the only 505 sailor ever to win the World Championships as both a skipper and a crew. Adding to the drama, Mike Martin won his first Worlds crewing for the regatta leader Howie Hamlin. Mike Matin and Mike Holt have become the guys to beat when the breeze is on ever since finishing 1-2 and the 2009 Worlds in San Francisco. Keep an eye on Mike and Mike if the breeze continues to rip this weekend.

DAY 3 had three races totaling eight for the series leading into the last day of the event. We had an on-time start and the first race of the day was sailed in 10-18 knots as the seabreeze tried to establish itself. The second race of the day started in 18 knots but quickly pumped up to 25-30 knots for the rest of the day resulting in some fantastic racing conditions. The waves were larger than Day 2 which resulted in excellent surfing downwind and boat speeds in excess of 20 knots.

The top four teams set themselves apart from the rest of the fleet on Day 3. Howie Hamlin and Andy Zinn continued their streak of consistency, but unfortunately had to retire from Race 7 with a broken main halyard; they maintain the overall lead going into the final day. No surprise to anyone, Mike Martin/Adam Lowry and Mike Holt/Carl Smit moved up to second and third respectively. It will be a tough battle on Sunday for the Championship title, with the top three boats all within ten points of one another and another classic Santa Cruz forecast on tap.

The real story of Day 3 was Michael Menninger and veteran crew Matthias Kennerknecht who won the day with a 1, 3, 1 to climb the standings all the way to 4th place. Michael and Matthias are borrowing Mike Martin’s second boat, USA 8714, which won the 2009 worlds in Santa Cruz. Michael may be new to the 505 class, but he is no stranger to high performance sailing coming off last year’s Red Bull Youth America’s Cup. Michael is exactly the type of sailor we are trying to attract to the class, and we hope this got him hooked and he continues to race with us. Now is a great time to get into the class with many great used boats available and the 2017 World Championship taking place in Annapolis Maryland. I personally cant think of a better boat and a better group of people to spend my time racing against.

Day 4 – the final day of the 505 North Americans was raced in a mix of conditions ranging from 10-20 knots. There was high drama in the first race of the day, as Mike Holt and Carl Smit jumped out in front with the lead pack while Howie Hamlin/Andy Zinn and Mike Martin/Adam Lowry were back in the pack forced to grind their way back. Both chasing teams made big moves on the first downwind leg; choosing to gybe-set and stay in more pressure. On the second beat, Martin/Lowry had clawed back to third, while Hamlin/Zinn were deep enough that they would have lost the regatta lead without picking up more boats.

The courses sailed for the series were primarily the “505 Worlds Course” which now consists of a windward-leeward-windward-reach-reach-windward-leeward- finish. Before the class changed to the larger spinnaker in 2002, the Worlds Course had two sets of reaches and one run. As a result, the class veterans not only love the reach legs, but they are much better at them then the younger guys. This was very apparent as we saw Hamlin/Zinn grinding down boat after boat in Race 9 all the way back to 5th place by the last leeward mark. Unfortunately for them, Mike Martin had passed Augie Diaz/Fritz Lanzinger which meant that they only had a one point series lead. Hamlin and Zinn had a great last beat to move into 4th place, but Matt Woodworth and I passed them on the downwind and keep the overall standings close. 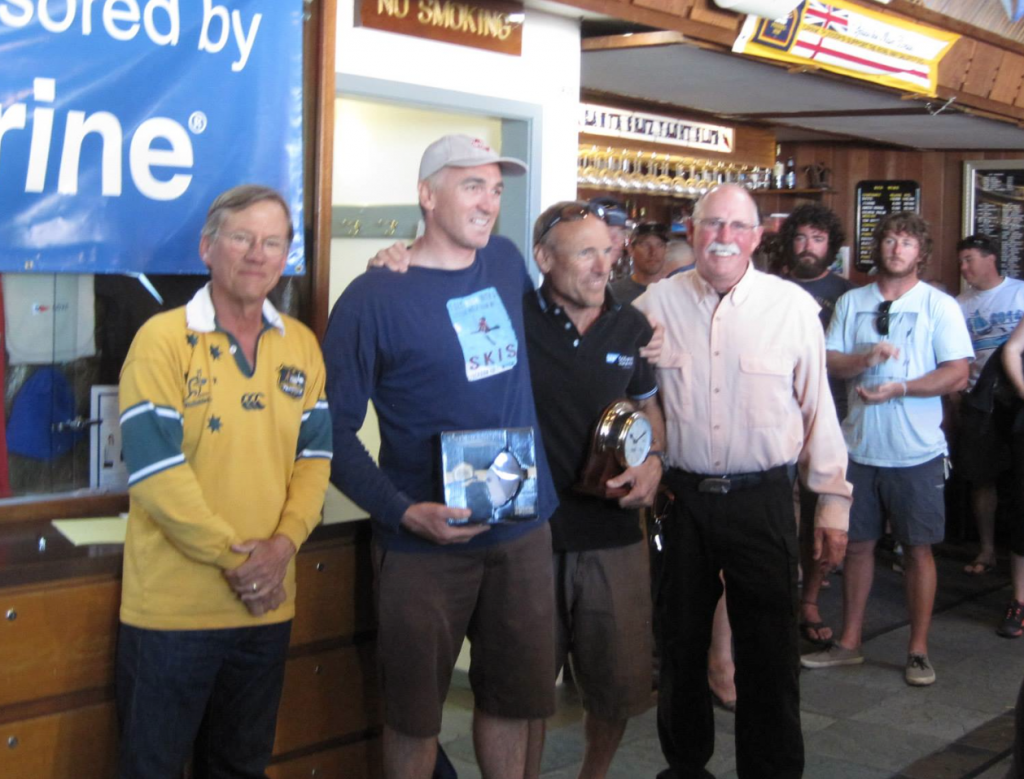 The race committee planned for two races to close out the series, but unfortunately the seabreeze faded to zero during the second race and abandoned the race on the second to last leg as the time limit of 80 minutes was approaching. This meant that Howie Hamlin and Andy Zinn had secured the 2014 North American title. This was Howard’s 7th North American’s victory and the first in over a decade (1990, 1992, 1996, 1999, 2001, 2002, 2014). Note that this year Howie turned 60 and has been racing in the 505 class for 38 years; to still be at the top of his game after all these years is an incredible testament to his hard work and dedication to the 505 class. A big congratulations as well to veteran crew Andy Zinn who wins his first North Americans after many hard fought years in the class. Pat Diola was awarded the Dave Cahn Sportsmanship award for 2014.

A huge thank you to the Santa Cruz Yacht Club for hosting an amazing event as well as all the sponsors, organizers, volunteers, race committee, and everyone who devoted their valuable time and energy to making this one of the best Championships that the class has hosted in recent memory.