There aren’t many sports better for high school kids to do than this, right? After all, it’s not like your kid is going on to play basketball at Stanford. Thanks to Lyn Hines for the words and pictures. 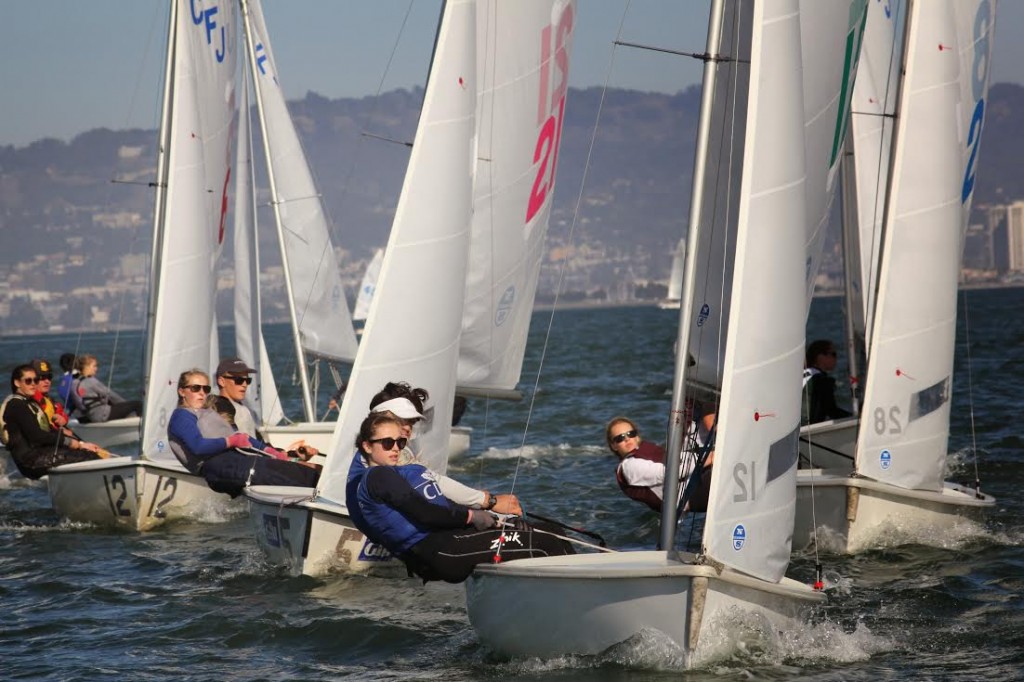 The 2014 High School sailing season has finishing up with participation and enthusiasm at capacity levels. Sailed in Flying Juniors, although admittedly not high performance boats, they are relatively inexpensive to sail, maintain and provide a level playing field.

On any given high school sailing event, you can get 50 boats and a hundred kids coming from as far as San Diego for a San Francisco event. For the last 25 years, organizers like Mike Segelbom and Tim Hogan, have seen seen team levels grow from 61 to 471 nationwide.

What drives the interest? How are programs financed? Where does High school sailing fall into the current sailing environment and what is its future?

Adam Corpuz-Lahne , coach at St Francis YC, with 10yrs experience coaching HS sailing – “Without a doubt HS sailing is growing, locally and nationally. In fact, down South, Southern California area has created the SoCal series to mirror the NorCal local races. For example, at a recent PCISA event at Treasure Island, there were 64 teams with both A and B divisions.

I think what separates HS sailing and regular sailing is the social aspect, being able to come down and hang out with a bunch of your friends. Sailing is a weird sport and is sometimes hard to get new people interested. HS sailing can get friends or peers involved and becomes more fun. HS school sailing provides an avenue for interested kids whose parents may not be involved in sailing or don’t have previous experience. It can also be slightly “less” of a performance oriented than other Junior sailing but have its moments.”

Micheal Segelbom “There is no escaping that High School Sailing is a “co-ed” sport which can be factored in unlike many other team sports.

Sailing as a High School Sport.

The Northern California PCISA coordinator Forest Gay emphasizes  “no matter how good you are, you can’t win the nationals by yourself”

”The focus has been on teams representing their high school and not just the yacht club where they might practice.   There is the mental changeover from a junior sailing program, either solo or crewed, to getting used to  “sailing as a team”.

Traditionally, sailing has not been seen as a school sport like football but this is slowly changing with school administrators and sports program directors getting involved.  There is also some school pride in seeing sailing trophies in the school trophy case.

What challenges you face as a coach and the sailors face? Adam Corpuz-Lahne “probably the hardest part is recruitment and reloading teams. One pitfall is to get locked into a particular group, and forgetting to “backfill” for departing Seniors. Clearly school has its normal commitments which are increasing every year. “

On an administrative side, Segelboom commented “ When we saw the amount of growth taking place, we realized we needed to get the infrastructure in place ie websites, databases, rules.

What are the down sides? Every sport has its “testing the limits” situations involving drugs, alcohol, appropriate social behaviour. To face this ongoing challenge, some organizers have or are requiring signed “codes of conduct” on top of the ISSA rules as well as defining repercussions for infractions.

How does it work? The exception is the norm. Teams vary wildly in logistics/funding/boats/coaching from all inclusive programs to programs pieced together with borrowed boats, facilities and volunteers.

Some clubs partially subsidize the programs to attract a younger membership, but not all.  Even then, the balance of funding comes from car washes, dinners, raffles, auctions and donations..

Segelbom comments, “there is a highly creative entrepreneurial spirit for many teams.  Fund-raising may help support coaches that range from, volunteers (a majority) to grossly underpaid with only a very few making real money”.

Because some schools now see high school sailing as a recognized sport, they might be willing to provide some funding for association and regatta fees.  In the end, like so many other sports, the final support comes from the parents both in time and money. Still, compared to other team sports, despite some pleasant venues at times, the costs are not much more when factoring in equipment, traveling training etc.

What is a typical Season?

In California, this year for example, there were 9 Northern California races centered around the SF Bay area, and 5 SoCal races. Both NorCal and SoCal teams competed in 5 PCISA regattas, split geographically including qualifying regattas for final championships in both Silver and Gold Fleets.

A typical regatta can have 50 + boats with sailors split into A / B fleets and rotating between races. The Gold fleet is a performance qualifying fleet which must be earned and lowest ranking skipper/crews can lose their spot to top Silver fleet sailors.

Where does High School Sailing fall in the sailing world? High school sailing is definitely growing at a time when sailing over all is seeing lower numbers. Schools are now beginning to look at sailing as a recognized school sport. Some sailors come from their junior Optimist or trainer programs, but some now come without any real previous sailing experience to High School Sailing.  Some of the highest growth in sailing has come from these teams.

Despite its success, there has been pressure against High School sailing believing it undermines Olympic potential. The belief is, that sailors at this age are not starting an Olympic campaign, European style, in performance boats instead of a FJ. These sailors then also have 3yrs experience when entering Olympic competitions but this comes at the cost of full funding, including living/travel/training expenses, and sponsored by governments.

“Its only the top 1% of high school sailors who might have the potential and this does not stop them from pursuing a Olympic campaign.” – Segelboom

If you have never been to one of these Hssailng regattas,  it is worth going, viewing  from the sidelines while the sailors unload boats, launch boats, go through skippers meetings, coaches meeting, and finally get on the water for short intense races. It is a fast and fun atmosphere which has proven to be popular in its numbers. Check a bunch of photos here

on the right side of righteous