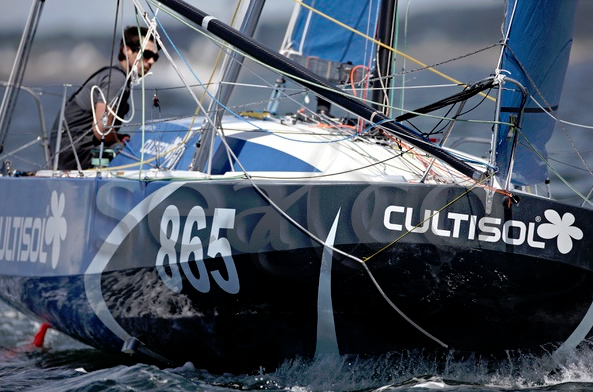 UPDATE: Half the fleet (18 boats) pulled out of the race, including 865 Cultisol and Davy Beaudart as an incoming low is expected to compress against the coast in the next 24 hours, bringing up to 30 knots of breeze.

Just days after Davy Beaudart’s prototype Mini Transat 865 Cutisol (aka Scow-bow Mini #2) has launched, it’s sailing in 2nd place in the inaugural “Mini in May” race, a 416-mile race currently taking place off of Brittany. The only boat ahead of 865? That would be none other than Giancarlo Pedote’s scow-bow 747 Prysmian, the one which started it all.

For those keeping score at home, that means scow’s 1-2 in a 37-boat fleet. And get this – they’re doing it in light air so far, both upwind and down, though up to 30 knots is on it’s way. With 865’s out of the box pace and 747’s near-miss at repeat wins in the Mini Transat, it’s hard to argue with boat speed and results.

The last Foncia (now Mare, and reportedly again looking for a sponsor…) has had her bow widened to the extent of the rule and it appears that even Juan K has drunk the kool-aid. What else will get a scow bow? Jump in the thread here. – Ronnie Simpson.

see you in the protest room. in hawaii.