Curating the internet’s best sailing videos for you, here’s another SA video edition.

While Thomas Coville’s crewed endeavors over the past couple of years (Groupama 70, Banque Populaire V) have been damned impressive, he spent the past few years losing to Francis Joyon in the world’s big solo records with a near sistership to Joyon’s IDEC.  The big Irens trimarans are narrow and light and designed for solo sailing, and clearly, Coville’s Sodebo just wasn’t getting it done.  So he picked up the bigger, wider, and much older Geronimo for a song, brought it to Multiplast for a mega-refit, and just relaunched in time for some serious pre-Route Du Rhum prep and record-breaking.  Looking goddamned good.

In other big French multihull Route Du Rhum news, Team Edmund de Rothschild relaunched their MOD 70 the other day for Seb Josse, but it’s no longer a MOD 70; instead, it’s a turbo MOD.  A lighter motor/generator,  lighter interior, larger canopy (Seb will live outside the cabin during the RdR), and most importantly, a set of Verdier/Koch-designed T-foil rudders.  Will Seb stand a chance against the super-trimarans?  If anyone can, it’ll be Josse.  More info here. 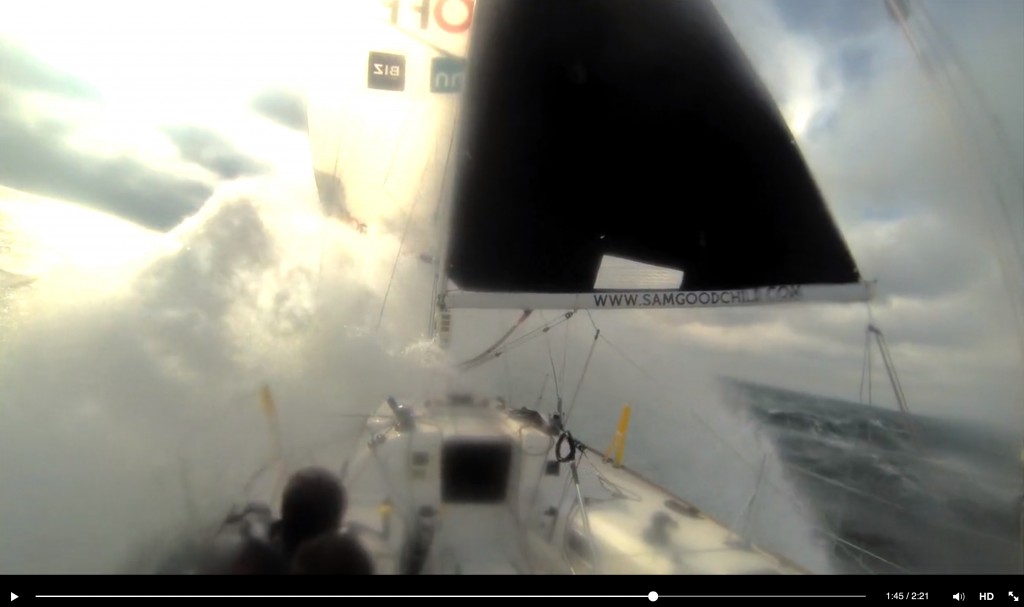 Artemis Offshore Academy’s Sam Goodchild continues his climb into shorthanded stardom, albeit it slowly. The young Brit continues his Figaro ways this year as he continues to hunt for Vendee Globe money, and here’s an intense clip showing what it’s like to sail in gusts to 60 knots. You think you know 60? Take a look and compare Sam and Sandy’s delivery to your biggest day.  Click the video to get to it.

With Flavio Favini on the sideline after his horrendous accident earlier in the year, Franco Rossini’s Blu Moon continued her winning ways with Matteo Ivaldi helping the Moonies to European Championship glory last week.  Here’s a video from midway through the week that showcases just how gorgeous Hungary’s Lake Baloton can be, with thanks to Janna Buriani for the shooting and editing.  Title shout is all about Old School, yo.

It’s amazing how quickly the once-amazing AC45s have descended into obsolescence; too flexy to make a good foiling platform and slower than pretty much all the foilers, Oracle Team USAustralia and Team Australia continue to practice in Sydney despite the irrelevance of their platform to the new AC62 class.  That being said, this video shows off the lighter, more easygoing side to OTUSAUS resulting from Tom Slingsby taking a much bigger role aboard as Sailing Team Director.  It also shows off a more American side to the team; Rome Kirby, Andrew Campbell, and now Matty Cassidy joined with half-citizens Slingers and Spithill bring the total yank factor up to 4, and with a very American design team, OTUSAUS is almost, dare we say it, an American team!  Good fun from the Oracle media boys.

Just When You Thought It Was Safe

Your $200k RIB seems like it can take anything you throw at it, but can it? These guys found out the answer.

One Man’s Trash Is Another Man’s Island

You’ve all heard about the Great Pacific Garbage Patch?  Well, how about Richard Sowa’s recycled bottle island?  We like. 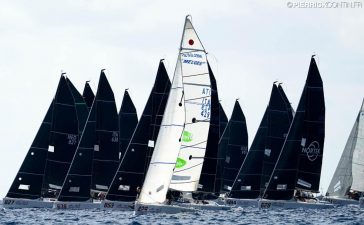