with one hand behind his back 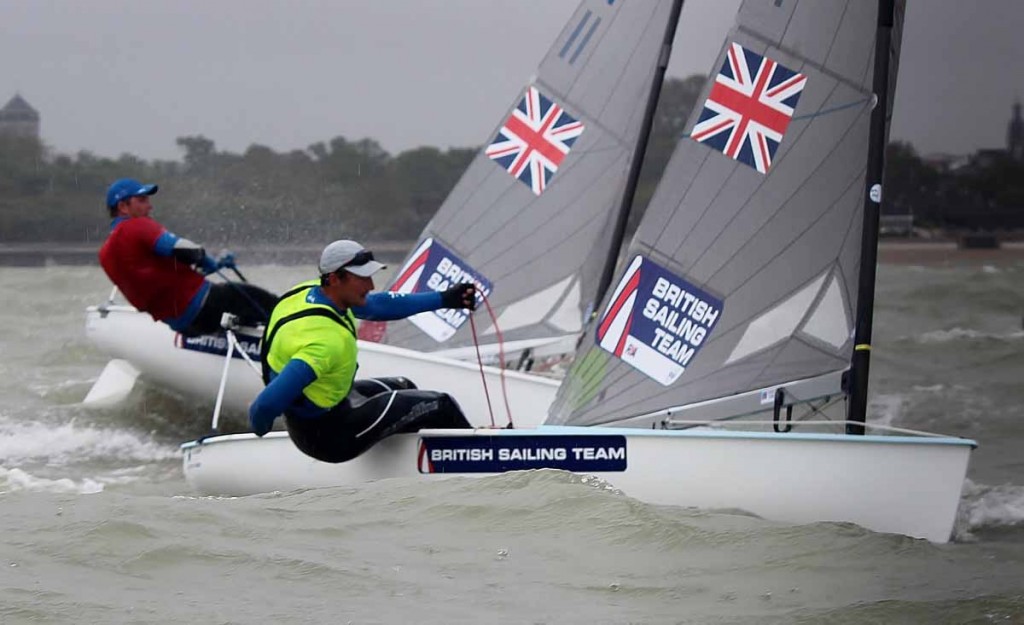 Giles Scott, from Great Britain, won the Finn Europeans in La Rochelle, France, on Friday with a day to spare. For good measure he also dominated and won the medal race on Saturday to end up with a final score 50 points better than the next best sailor. His winning margin is the largest of any European title win in the recent history of the class.

It was no ordinary fleet. With 100 boats from 31 countries it was the most competitive fleet so far in this Olympiad with all but a handful of the world’s best Finn sailors present. It was also the clearest indication that Scott is at the top of his game, at least when there is breeze. He had a chance to clinch the title with two races to spare, but never really recovered from incorrectly reading the lighter winds of the first beat in race 9, so had to wait until the second race of the day to make sure of his second European title.

Second placed Vasilij Žbogar from Slovenia was the defending champion, and surprised even himself by his performance. Blisteringly fast downwind he is one of the lightest sailors in the fleet and struggles upwind in a breeze. He came to La Rochelle with untested gear and little confidence, but his conservative style and clever tactical sailing always got him to to the top mark close enough to the front to make his move downwind.

Scott’s compatriot, Ed Wright again picked up a medal, his fifth major championship medal in the last four years. He has come so close to winning many titles, but hasn’t taken one for four years. Having played second fiddle to Ainslie for many years, he needs to quickly find a way to match Scott if he is to finally be able to achieve his Olympic dream.

Also encouraging last week was the junior championship sailed as part of the senior event. Both are open so can be won be anyone, and this year Jake Lilley from Australia was not only the clear winner, but also placed 15th in the seniors, an impressive achievement. Coached by the 1984 silver medalist John Bertrand from the USA, Lilley has a very focused attitude and is one of the fastest ascending stars of the fleet. Only in his second full season in the Finn, he has the skill and the work ethic to become to become a significant threat in 2016, and you get the impression that Bertrand knows this. Surely we will hear a lot more about this young sailor as he attempts to qualify for Rio.

The build up now begins to the first Rio Test Event in August and the all important ISAF Worlds in Santander in September, where the first nation slots for 2016 will be decided. By the autumn we will get the first feel of the way the dice are falling. Some will succeed and some will have to regroup next year, but whatever happens over the next four months, fifty points is an incredibly big gap to bridge, by any standards. – Robert Deaves.

the agony of defeat