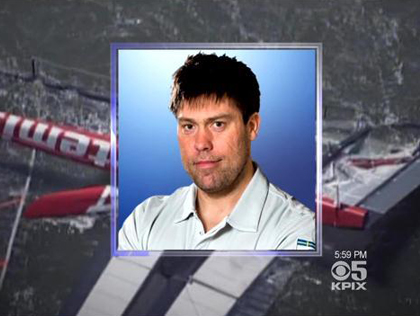 It’s the one-year anniversary of Andrew “Bart” Simpson’s death aboard the JuanK AC72 known as Big Red, and also Bart’s wife Leah’s birthday, and no one can say that Bart’s friends – guys like Iain Percy, Nathan Outerridge, Paul Goodison, and Ben Ainslie – have let the memory of the man fade away, even for a few moments.  They’ve spread his name all over the UK in countless ways, with major time and money going into the creation of the record-attempting Bart’s Bash and todays ‘s dedication of the Andrew Simpson Sailing Centre in Weymouth.

Is every one of Bart’s friends willing to just say ‘shit happens’ instead of finding a shred of responsibility or accountability for the fuckups in design, construction, and/or sailing that killed their teammate?  We  expected it from disgraced team CEO Paul Cayard, who said next to nothing and basically became invisible after Bart’s death until being booted from the team after Artemis’ ignominious exit from the LV Cup.  But to get the same silence from real leaders; guys like Ainslie and Percy and Goodi who’ve never been bashful about speaking their mind, we expect better.

If this was Formula One, someone would be in court or jail right now, or at the very minimum, hauled before a governmental investigation panel.  But this is sailing, something no one in public office cares about for more than 12 seconds, and if Bart’s friends inside the sport don’t make noise, no one will.  While we think it’s awesome they are raising all this money – much of it going to Bart’s widow – we also wonder if maybe, the best way to remember Bart would be to find out exactly why his boat killed him after folding itself into little pieces on a typical day in San Francisco. You don’t hold people accountable out of vengeance, or anger – you do it so history doesn’t repeat itself.

CLARIFICATION: There’s been a lot of discussion about our editorial above, and we’d like to clarify a bit:  We are not questioning the integrity of any of Bart’s friends or family.  We are questioning why a death on an AC72 is any different than a motor sports, air racing, or traffic accident, or for that matter, any of the numerous life-ending sailing tragedies we’ve seen over the past couple of years, and we are questioning why people close to Bart haven’t demanded more.  Low Speed Chase went up on the rocks just a few miles from San Francisco last year in a crewed race, killing 5 crew of the 8 aboard.  An extensive, expensive, nearly year-long investigation took place thanks to US Sailing, with a lot of important lessons learned by the hundreds of thousands around the world following the tragedy, and some closure for the families and friends of the deceased sailors.

Meanwhile, there’s been no such response by US Sailing, ISAF, the USCG, the State, or anyone else for Simpson; rather, there have been a few open-and-shut inquiries by police departments with no apparent interest in delving into an area that’s totally unfamiliar to them, with every move watched over by legal counsel to billionaire businessmen.  There has been an internal investigation by Artemis without a single page released to anyone outside a tiny circle of Artemisians.  What about the tens of thousands of fans Bart had?  What about an English public that cheered he and Percy on so strongly during the Games?  Do they not deserve more than silence?

CORRECTION: Richard Butcher is Chairman of the Board of Trustees for the Andrew Simpson Sailing Foundation, the charity formed in memory of Bart, and he wanted to correct our piece.  Over to him.

The purpose of the charity is principally educational, via the sport of sailing. This will partly be met by encouraging into the sport those youngsters who would not otherwise have that opportunity. One of our aims is to help find marine related apprenticeships for some of these youngsters.  Yesterday, we achieved a historic milestone in the charity’s short period of existence by opening the sailing centre in Weymouth. This enables us to have a focus at a world class facility.  Every bit of the amount raised is destined to help fulfil our objectives, and we have every ambition of this becoming a world-wide charity once funding permits.

There was a serious inaccuracy in the item you published yesterday. None of the monies raised for the charity will go to Leah, Bart’s widow. It will only go towards the fulfilment of our objectives. Leah is one of our Trustees and it would not, in any event, be permissible for her to benefit from the charity.   It is most important that those making donations to the charity, whether it be by Bart’s Bash or otherwise, are not in any way misled as to what will become of their donations.

and i got the pedal to the metal

oxy is good for you