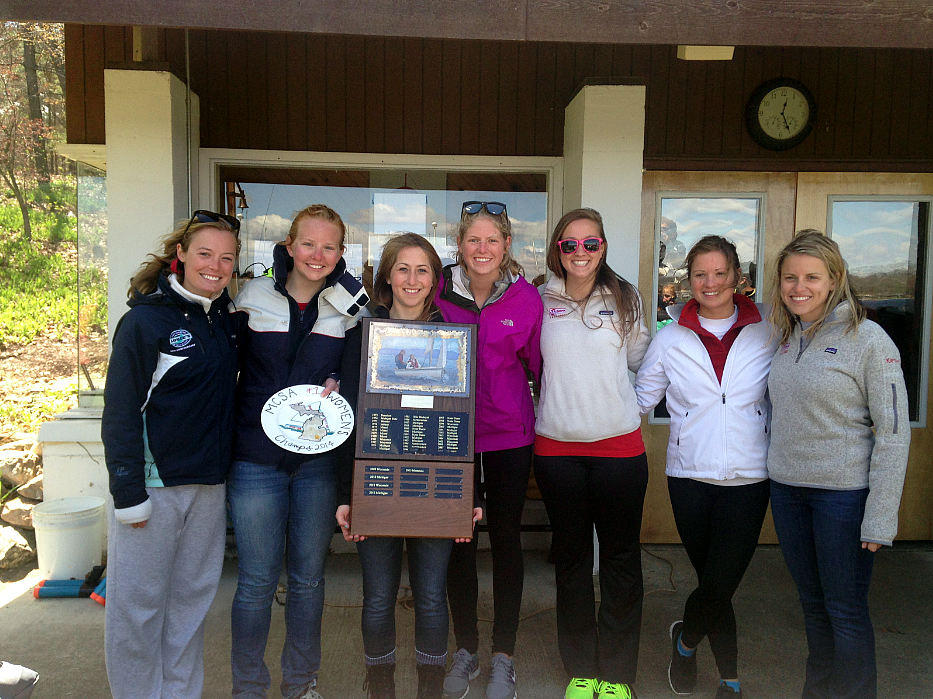 It was an exciting weekend on Baseline Lake for the Midwest Collegiate Sailing Association women.  Five universities (Iowa, Michigan, Wisconsin, Northwestern, and Minnesota) came together to battle and compete for three spots to Women’s College Sailing Semifinals to be held in Annapolis, Maryland at the Naval Academy in late May.

Sailors were greeted with unexpected strong, blustery winds with gusts well above 20 knots on both Saturday and Sunday; rare conditions for this tiny Michigan lake.  However, each team and individual rose to the challenge, displaying their strength, agility, and endurance.  With such conditions comes capsizes, but also an intense and high level of competition that is exhilarating to be a part of and even watch from shore.  Skippers and crews alike were in full “beast mode”, hiking as hard as possible upwind without time for a break.  Tensions were high in all aspects of racing between the top two boats; you can see it in the scores.

After day one of racing, the Minnesota women were in first ahead of Wisconsin by just one point.  On Sunday, only 4 races were left (2 races in A Division, 2 races in B Division).  Each race was an incredibly close face-off, and in the end, Wisconsin ended up closing the gap on the Minnesota sailors.  Going into the last race, the two were tied.  Wisco sailors were watching anxiously from land, and after 20 minutes of pacing and watching every shift, tack, and gybe, Wisconsin became the MCSA Women’s Champions.

Wisconsin is the only team from the MCSA to be attending all three national events in May: Coed’s, Team Race, and Women’s.  The team is entirely student-led and funded, relying mostly on fundraising, donations, and team dues.  What each sailor on Wisconsin and in the MCSA has in common is an incredible passion for sailing, and a strong work ethic to be able to do what they love and make their aspirations and goals a reality.

Follow the Wisco Sailing Team on Facebook and Twitter to learn more about them and their Nationals adventures and achievements.  If you’d like to support Wisco, click here.  Scroll all the way down and click “Donate Now”. Choose “Wisconsin Union” on the drop-down menu, and write your donation amount. In the instructions box below, just write “Sailing Team Nationals 2014”.