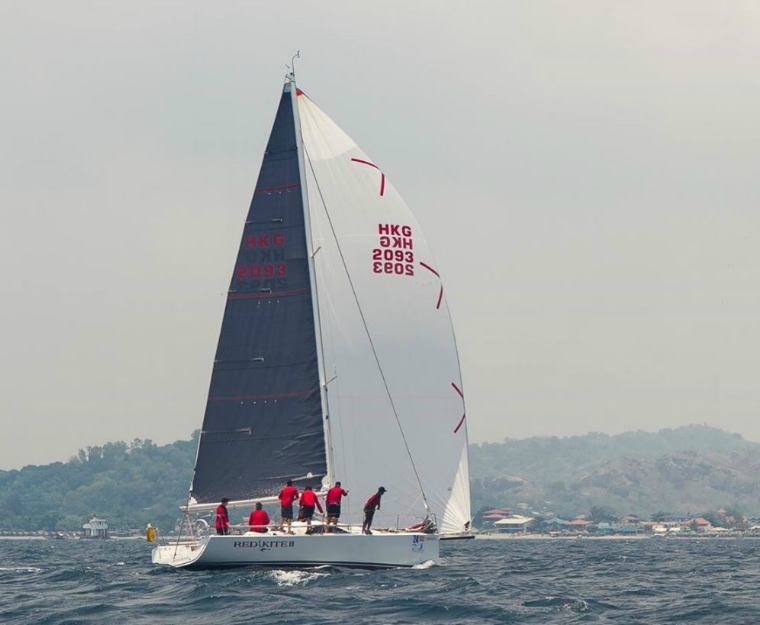 Anthony Root, sailing his A-35 Red Kite 2 has extended his overall lead in the Asian Yachting Grand Prix circuit, by convincingly winning the China Sea Race over Easter, followed up by another win at the Commodore’s Cup Regatta, held in Subic Bay.

The China Sea Race starts off the Royal Hong Kong Yacht Club, in the famous Victoria Harbour, then travels 600 miles down to Subic Bay in the Philippines. Although the race was sailed in light winds for the most part, the RK2 team did an excellent job to score a convincing win in IRC Division 2, correcting out to 1 ½ hours ahead of second place. After a couple of days well deserved R & R, the team was joined for the Commodore’s Cup Regatta in Subic Bay by Doyle NZ’s Andy Pilcher, who had brought up a new Stratis Carbon/ICE Inshore Mainsail and A2 Running Gennaker for the regatta.

Day 1 dawned hot & hazy, with no wind to be seen anywhere. In what was to become a familiar pattern, the boats headed out and then spent a couple of hours drifting around waiting for the wind to fill in. Eventually, some zephyrs of wind came across the water, which built surprisingly quickly to a very nice 12 – 15kn sailing breeze, and the Race Officer sent the boats off on a 26 mile Islands Course. Sailing in Cruiser/Racer Division A, Red Kite 2 finished second on corrected time, behind the well sailed Sydney 43 Elektra which was able to stretch her legs on the longer course.

Race day 2 repeated the pattern of heading out to the race course early, only to wait for the wind to fill in. Again, the breeze eventually came in nicely and we were able to get two Windward/Leeward Races completed. RK2 scored a good win in the first race, but was called “OCS” at the start of the second, causing us to turn around and return to the start. The team fought strongly to get back into contention, but it was not enough to catch the Mills 39 Mandrake who scored their first win of the regatta, with RK2 in second.

Race day 3 was another long Islands Course, where the results of Day 1 were repeated with Elektra scoring another win ahead of RK2, followed by Mandrake.

After four races, the top three boats were closely bunched on points, with all three having a chance of overall victory going into the final day, when another two W/L Races were scheduled. Again, the breeze wasn’t ready for the boats when they arrived on the race course, but soon filled in so the teams could continue their battle. After getting away cleanly with two good starts and working hard to keep sailing in clear air against the bigger boats in her division, RK2 managed to score firsts on the final day to secure the overall win, finishing five points ahead Elektra who just beat Mandrake into second overall on countback.

Most importantly, the results from both the China Sea Race and Commodore’s Cup mean that Red Kite 2 has extended their overall lead in the “Asian Yachting Grand Prix” series, with just two regattas left. The Red Kite 2 team would like to thank the organizing committees for both events which, as always, were very well organized and a lot of fun. Thanks to Doyle NZ.