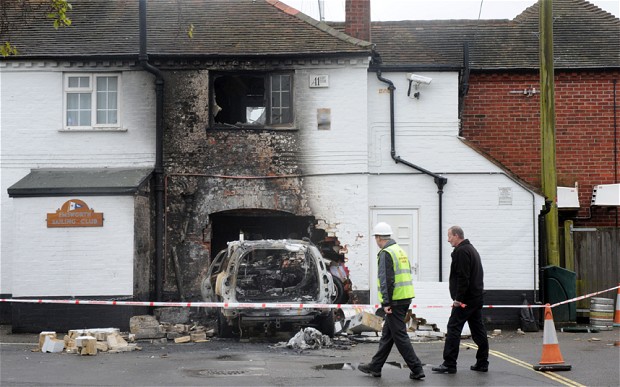 In what we can only imagine was a creative way to protest his rating, the 82-year old owner of the 31-foot cat Starquest destroyed about a third of the Emsworth Sailing Club’s newly refurbished clubhouse last week.  Apparently, Captain Clifford “John” Caughey took two practice runs in his Volvo before backing up and launching his car into the Club at around 70 mph.  Since that was clearly not enough damage, the good Captain then got out of the car with a gas can and proceeded to douse the Volvo before setting it alight.

Caughey was taken to hospital before being arrested, and there were no other injuries besides those to one of the oldest sailing clubs in the world; it’s already business as usual though at Emsworth; you just can’t keep a good English sailor down.  Full story here at the Telegraph, Mike Walker photo, and thanks to JB for the heads up.