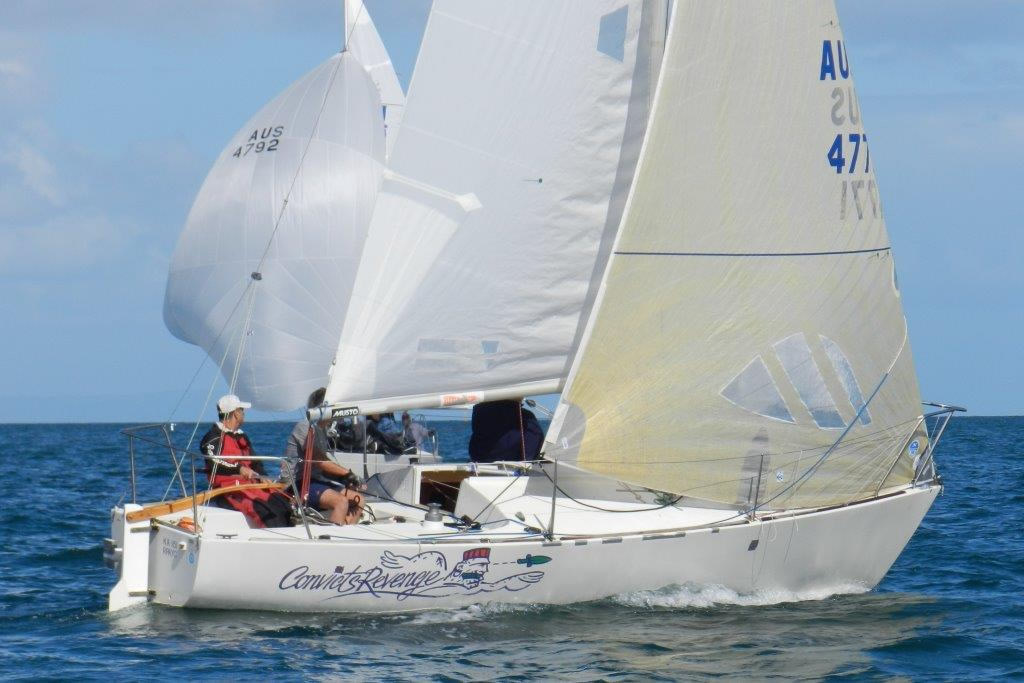 After a close and hard fought series of 8 races on Port Phillip last weekend, the MONJON 2014 Victorian State titles was won Dave Suda sailing Pacemaker. Sailing with Dave are Herschel, Luke, Sam and Rachel, pretty much the same team that has been doing it for the last 10+ years, perhaps the only team in the fleet to have been together for so long – and it showed. Dave had to drop a second place, it doesn’t get much better than that. That’s second place Convict’ss Revenge looking good pictured left.

Dave keeps his cards close to his chest with a glimmer of a smile as he tries to keep a straight face about his plans. But I am the keeper of the royalty tags, so I know who is getting new sails, Dave – new set, Hugo new sails, the girls new genoa, mmmm … well we had a new kite and reasonably new sails.

Says Dave of the racing on Saturday, “After six months of arguably the best summer season for as long as I can remember, we finished with two perfect days, racing J24’s as hard as we can, against 16 other J24 crews who used every ounce of speed and skill to will their boat ahead of the next, on a course as well managed as any sailor could hope. I feel sorry for the J24 members that didn’t sail this weekend, for they missed another beauty.

Saturday had four races and four different winners, with Gridlock Doug Watson and co taking heat one honours in a tight three way tussle from Pacemaker and Convicts Revenge. Race 2 was a nail biter with Convicts Revenge holding the narrowest of margins over Pacemaker at every turn and they defended multiple attacks on the final downwind leg to cross the line 2 seconds ahead.

Race 3 saw another black flag and this time Convicts Revenge had a lapse in concentration on the restart and crossed early, meanwhile the largely female crew on Hyperactive had a brilliant start to hold a comfortable lead all the way to the finish.

Race 4 and wind increased to 18 knots for the last race of the day. We eventually started second row directly behind Hugo after we left our port approach late. We couldn’t find a gap anywhere near the pin in this much improved and aggressive starting J24 fleet. We tacked very shortly after the start and ducked a few sterns to find some clear air and thankfully met a 15 degree right hand shift and extra pressure, thanks Huey! The usual suspects of Pacemaker, Convicts, By the Lee and Bruschetta VI led the fleet home.”
But let’s step back a bit. A full week’s training and boat preparation was put on hold as Melbourne had its wettest week in living memory, if nothing else the deck was clean, although there was the distinct possibility that there might now be fish living inside the boat.

Ron Thompson takes us on his journey to the states. ” Friday was spent with bucket and sponge getting the water out.  And the forecast was 25 to 30 knots southerly with big waves and rain again. Oh, lets just turn up and see, with a new crew with one day training and nothing in heavy conditions. Got to get up early Sat morning at 6am and do another walk around the block to lose ½ kilo as weigh in finishes at 8am.  What an ungodly hour.  We are struggling with crew weight as everyone lied last week, even me and although I lost 3 kgs, got to lose a bit more.  And it will be cold and wet on my walk!  No … surprise, actually it is not raining and I can see clouds in the sky after only seeing grey all week.  Ah, but I bet its is blowing hell on the water.  Arriving at the club and the burgees are flying nicely in a 12 knot wind.  What happened to the 30 knots, must be coming later!”

Brendan Lee (3rd overall) leads us into Sunday. “Sunday arrived and again with beautiful blue skies and light South Easterly winds, or was it South, or East, or South South East. Okay let’s pick south and head out to sea on leg 1. Bollocks wrong choice! Next upwind leg, okay there is more South East in this, let’s go left. Bollocks wrong choice and so it went on every leg. Race 6 was a bit like race 5, a late surge on the final leg saw us scramble into a respectable position. Race 7 and the wind clocked to 180 degrees and freshening. Right this time I am going out to sea. Hey presto it worked – 2nd place but behind Dave AGAIN! 4th race, much like the 3rd…”

So we all get our few moments of glory, in race 6 Jet’s came knocking. I decide that there is a big lift on the port layline and go for it, we picked it and Jet is around the first two marks first. All good and happy and Matty is now satisfied that his trip down from Sydney was worth it. I tell the crew that all we have to do is cover. But I don’t, I tack onto what I think is the lay before Steve does and then we get knocked while he gets lifted, around the top mark 2nd and we did a bear away set, Dave does a gybe set behind us and by the time we have gybed he is level with us on what is now a lay though to the finish, he just pips us. I am consoled by the crew for at least putting us ahead – before being dumb enough to lose it.

Dave continues, “Race 7 arrived and we knew a win in the next race would be enough and then we see Convicts doing penalty turns with two minutes to the start. We happily refocus and get a great start with Hugo near the pin, then tack out right to cover the fleet. By the end of the race Convicts Revenge has recovered to a very credible 4th, behind Pacemaker, By the Lee and Doug Watson. We relax now and enjoy a great final race battle with Steve Girdis in Convicts Revenge who take the win.”

Steve is a great sailor, a sly “young” fox who smiles at me from the back of the pack (I think I must be doing quite well to be near him) and then again from the podium – how does he do that?

Race 8 and Dave has won overall, Steve is second and Brendan third.

Brendan, “Onto the prize giving and it was Dave and the team picking up the winners trophy again. I could have sworn I had them 8 from 8 on the starts. My trimmer says “Okay, well I may not be able to sail, but I can lift heavy boxes”. What more can a skipper want? 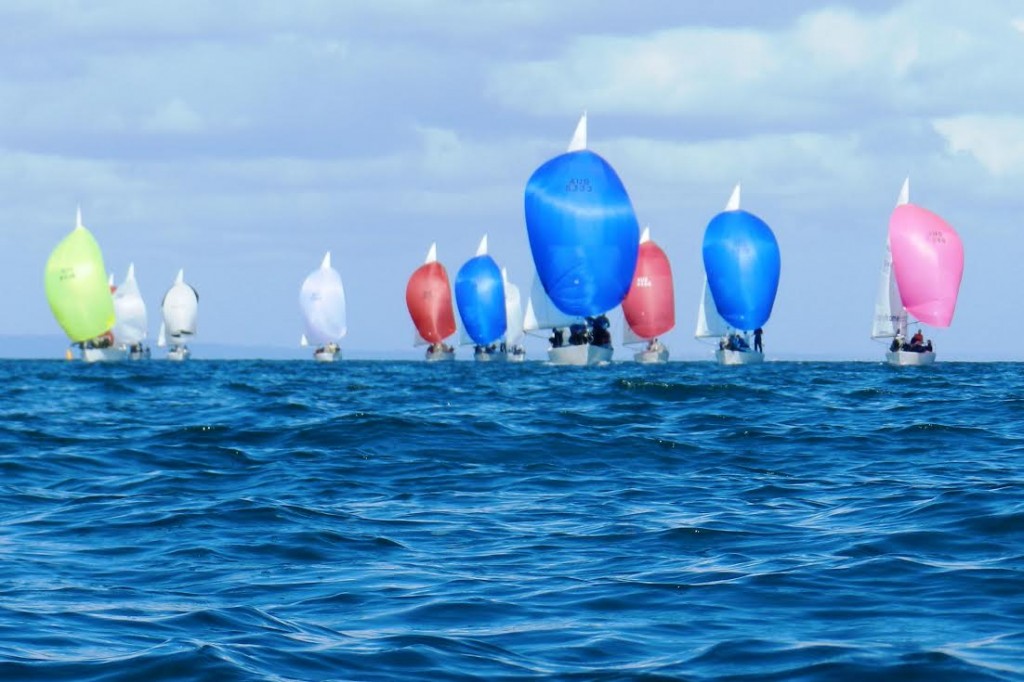 There are of course lots of stories from the front to the back, Doug MacGregor, our State President is a voracious defender of the truth and tells it like it is. “Clear air was the only currency worth bothering about on a start line that felt like a combination of a scrum and an orgy.  One abiding but crucifying memory; we probably came out of the final start in 4/5 position.  We couldn’t have been happier.  Going to windward I bloody well had them … and they just sailed right over me.  I shrugged my shoulders and thought “National Champion” whatreyegonnydo?  Three tacks later we make our final tack on to the lay line for the top mark …. Lovin’ every second.  Over we go. Last place!  We invented a new word; absolfu**inguetlyfu**ingbefu**ingmusing.  Seemed to be the story of our states. It’s a wonder they didn’t throw me overboard.  I am so grateful to them for sailing with me and sticking by the boat through thin and thinner.  The silence on our boat as we sailed in after the last race was deafening.”

Kirby O’Brien, sailing on Vertigo and also one of the hard working committee team doing the weigh in, with her usual dry sense of humour also made a number of observations.  ” It all went pretty smoothly, but if I had one bit of feedback to offer, I’d say “not enough stripping”. Honestly, it just didn’t stack up to past years. Although an honourable mention does go to Daniel, who stripped with incredibly good humour considering that none of the rest of the Vertigo crew bothered to wait before getting stuck into the beers, so the 800g excess was his and his alone to deal with … albeit to the sound of our hearty encouragement and a round of applause when the final piece of attire yielded up the last required 200g’s.

I think it’s time I offered up a few rule change suggestions to the committee, all with the idea of introducing a little more sport into the weigh in process:

No more four member crews. Where’s the fun in watching sailors stroll confidently up to the scales, not even bothering to remove their shoes, as they know the 400kg limit isn’t a worry unless they convert their entire life saving into 20c coins and carry it on their backs. No more. What this situation needs is another body and all five of said bodies can take themselves off for a 10km run and return to approach the scales with the dread and trepidation that the rest of us all know and love.

No more people under 60kg !  I mean really, what is more annoying to those of us with a life of dinners still on the belt, than someone stepping up to the scales, registering an elephantine 57kg and moaning that they’ve gained since last regatta?

OK, so to the racing…well let’s see, race overview…I lost a shoe (Vice Versa and Fly Away Jay – you guys rock for randomly finding my missing shoe in the middle of the bay and bringing it back!), I got splashed a bit, pulled some ropes, forgot to pull some other ropes, got yelled at, got annoyed when a boat tacked in front of us and when we yelled “Protest! We had to change course”, he turned to us with the smile of a Cheshire cat and replied “Did not.”  Well!  May I take this chance to say simply… “Did so.” You know who you are!!

And that’s it really. We came outright last when it mattered – the race back to the crane. I think I have new life goal – to get into the dock before Pacemaker is safely tucked away into its place on the hardstand.”

A huge thanks to the J24 State Committee, Sandy YC, all the volunteers and especially to the sponsors, MONJON in particular, Anchor Marine, Bike Factory Outlet, Smart Marketing, Synergy Audio  – and also to Hugo for the delivery of 25 logo-printed protest flags! What other regatta supplies the protest flags!

Well, in the end the Thommo Cup was a fizzer this year and Jet has finally beaten Ron and Kirsty and no one ahead of us is a slug so I guess that’s a good series result. I’ve locked up the trophy cabinet again, let the dust rule supreme. There will always be another regatta.

The MONJON Victorian State Championships have proven to be the best regatta of the year again, the ultimate J/24 season grand finale.  Written by Simon Grain with help from Dave, Brendan, Doug and Kirby- thanks guys. Go here for the full results. – Simon Grain.

how the mast was won