2014 Congressional Cup – US One
By Brian Janney 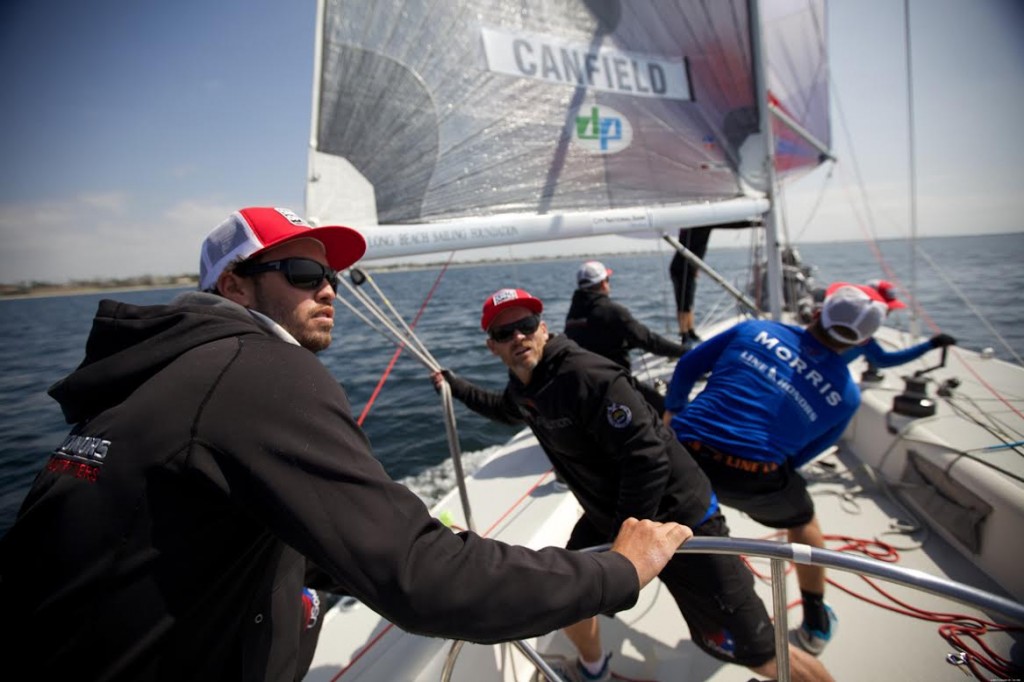 Let it be said…we’ve been looking forward to the 2014 Congressional Cup since the 2013 event ended. Cup Cup is the granddaddy of modern match racing and although Taylor has been invited several times before, this year had a certain edge to it. The event was split into 2 tiers this year. Tier 1 featured 6 invited skippers who hadn’t won a Con Cup and had to compete to make it to the second stage of the event. Tier 2 was filled with the previous Con Cup champions. Catch was, we were placed in the Tier 2 group…but we had never won the Cup. US One got put in Tier 2 because we are the ISAF #1 ranked team and had just won the Alpari World Match Race Tour. Just a bit of pressure.

It was great getting the band back together…we hadn’t raced since Malaysia in December. On the bow was Hayden Goodrick, I was in the pit, Mike Rehe – offside trim, Dan Morris – trim, Rod Dawson was on main/tactics and Taylor Canfield drove.

The first 2 days of the round robin we sailed well placing near the top of the leaderboard. By the last day of the round robins we had a spot locked up for the semis and were able to lock down top seed ensuring we had pick for the semi-finals as well as starboard advantage in the knockout rounds.

The final 4 teams for the semis were US One, Francisco Bruni (Luna Rossa), Keith Swinton (Alpari FX), and Ian Williams (GAC Pindar).

Now let it be said: we’ve got a friendly relationship with all these teams, after all we’ve competed against each other many times. However, being the #1 ISAF matching team we were keenly aware that the #2 ranked team was thru to the semis…and ever since gaining the #1 title in August 2014, beating Ian in Bermuda, and winning the Tour last year we knew a lot was on the line.

On the way in on Saturday we started to talk about who to pick for the semis. One school of thought is pick a top team so you can get the hard race over with and hope for an easy final. That one never seems to be a team favorite. We like to choose the team with the least amount of round robin points to give us the best chance of advancing. In this case that meant facing Australian Keith Swinton. 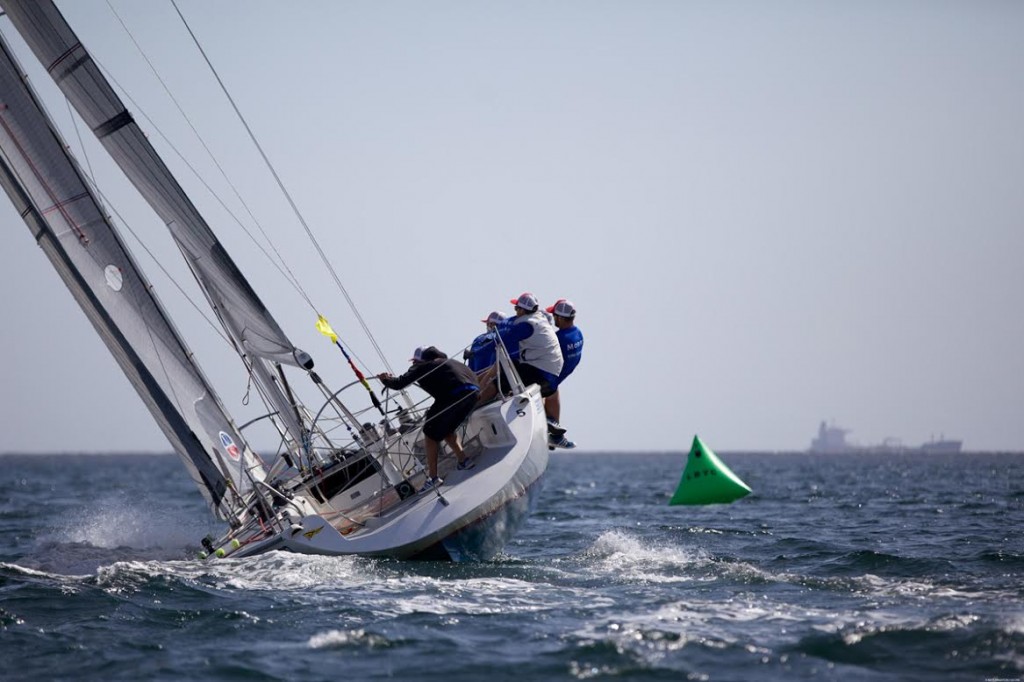 We had to work hard upwind and downwind to keep it close. We knew that our strength was in boat handling and at both leeward marks we made our passes to take the lead. We won the semis 2-0 and moved into the final against who else…Ian Williams. Now from a regatta stand point I’m sure the organizers loved seeing the #1 and 2 ranked teams in the world sailing in the final. As a competitor we knew it wasn’t going to be easy. Ian and his team don’t make many mistakes and when they do they are quick to fix them.

Everyone on board was loose and in a good mood headed into the finals. As we waited for the petit-final it got cold so on went our Line Honors hoodies…of course Taylor loves to wear it with the hood up. Looking ahead we knew the finals would be best of 3 so being on starboard for the first race and, if needed, the 3rd race is a nice advantage to have.
During the first pre start we were able to get a penalty on Williams and come off the line in a leeward position. The first beat was mainly a drag race where Ian was trying to roll us and we were trying to pinch him off. It took 3/4 of the beat but we were able to get Ian to tack away. During the run we pulled away and never looked back. 1-0 to US One.

The second race we entered from the port side and this time we copped a penalty as well as didn’t have the best start. As stated previously, Ian doesn’t make many mistakes and he sailed away up to a 2-3 boat length lead. On the last run we closed the gap but during a luff our spinnaker touched his and since we were windward we got a second penalty and Ian easily won. Even at 1-1…you couldn’t script this, there’s going to be 1 race to decide Con Cup Champion AND #1 ISAF ranking?

Prior to the third race, we were doing our pre-race lay lines and Rod looked over and waved to Ian’s crew in a “hey good luck, good sailing” kind of way…their team was in the zone and just shot us that “we are coming for you” look. Great. Everyone on our boat was in a good mood and ready to win the regatta, so no one talked about anything other than where the first puff was coming from and what side of the course looked best. The pre start was intense and as we were on final approach to the start, Ian was pushing and got too close and ran into our transom hard! That took the pressure. We sailed up the course and a tacking duel started but Mike Rehe and Dan Morris had been doing a great job tacking the genoa all week and we slowly opened the gap a little bit. Then at the top of the course Ian got a last min shift and 5 lengths from the mark we had to do a very tight lee bow. 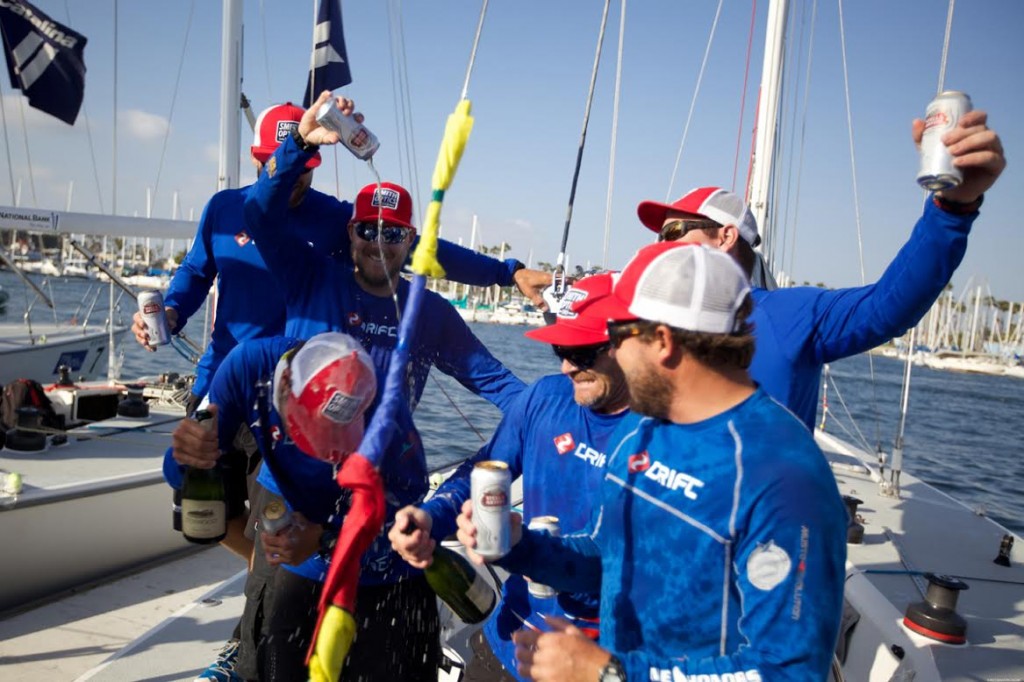 But you didn’t think this was going to be easy right? At the Leeward mark during the takedown bad luck hit and our spin caught the trip wire for the spin pole and we had 2 tears in the spinnaker. One was a 1-foot-by-1-foot “L” shape tear and I had to spend most of the upwind leg below trying to put tape on the wet spin. I popped up from down below about 5 lengths from the mark and had to go head down during the set. I didn’t look back until about half way down the run and smiled as I saw that we now held a 5 length lead and we’d hold on for the win! After the race, Matt Cassidy, Ian’s bowman, jokingly ran up to the bow and yelled to us “Hey, slow down and make this more interesting for TV!”

An epic event that caps off a 14 month dream-roll for our team as we head fresh into the 2014 Alpari World Match Racing Tour…we want to say thank you to all who have supported us this far, including Smith Optics, Bob and Erika Hillier at Line Honors, and Chicago Match Race Center. Check out the video here.

Follow US One on the team Facebook page. As the program is growing, the team is actively entertaining sponsorship for the 2014 season. If interested in partnering with the team, please contact Hayden Goodrick at [email protected]. Video and photo to Matt Knighton