out on a limb

Young Tim Fitzgerald shares his experience as the founder of the first drag-race style speed sailing event on the East Coast; the 3.8 mile Fort2Battery Race in Charleston, SC.  Photos from Els Sipkes; her blog is here with more, and there are hundreds more in her SmugMug gallery.

60 days ago I didn’t know if Charleston wanted a drag race sailing event, and after today I can only say “WOW” when I see how much they do! Today I saw 150 people line up on the Battery to watch kites and boards and boats on a 9-minute sprint down Charleston Harbor. Elderly people stopped me in the park to confirm the start time. People in golf carts tailgated on the points of land on James Island to watch the watery wipeouts that equate to “the big one” in a NASCAR race. The only time in my sailing career I’ve ever heard of more than 100 people coming out for an American sailing race was the America’s Cup or the Olympics and today we accomplished that with little more than the economical low-end of sailing’s high speed Band of Brothers.

Charleston is the perfect place for a sprint like this; with the beaches, breeze, and boating community, it’s a playground for those who chase the wind, and with North America’s biggest regatta, the biggest Sportboat regatta in the world, and the East Coast’s biggest kiting community, the “Sailing Capital of the South” has emphatically stuck its pin in the world of high-performance sailing.  With an oversubscribed field of 55 entrants in the first ever running of the Fort 2 Battery Race, you can consider that pin the size of a railroad spike driven in with the overhead swing of a sledge hammer.

Anyway, it went like this:  At 3 PM on Sunday, a new battle took place in the shadow of Fort Sumter; the site of the Civil War’s opening salvo.  A ragtag fleet of foiling moths, kite board, catamarans, sailboards, and skiffs went on a downwind blast to the Battery in 13-18 knots of Northeasterly breeze for a cash prize, bragging rights, and the new title of “King of the Harbor.”  Bora Gulari, fresh off his win in last weekend’s Moth North Americans, led from wire to wire on a starboard-tack favored run; his time of 8m58s for the 3.8 NM course equates to an average VMG of nearly 26 knots – even more incredible when you account for the 2-3 knot outgoing tide and a gybe.  The first four finishers were moths, with the fastest course-race kite board about a minute behind; importantly, there were no foil boards in the inaugural Fort2Battery Race; we’re told they will most definitely be back next year, as will the Moths. 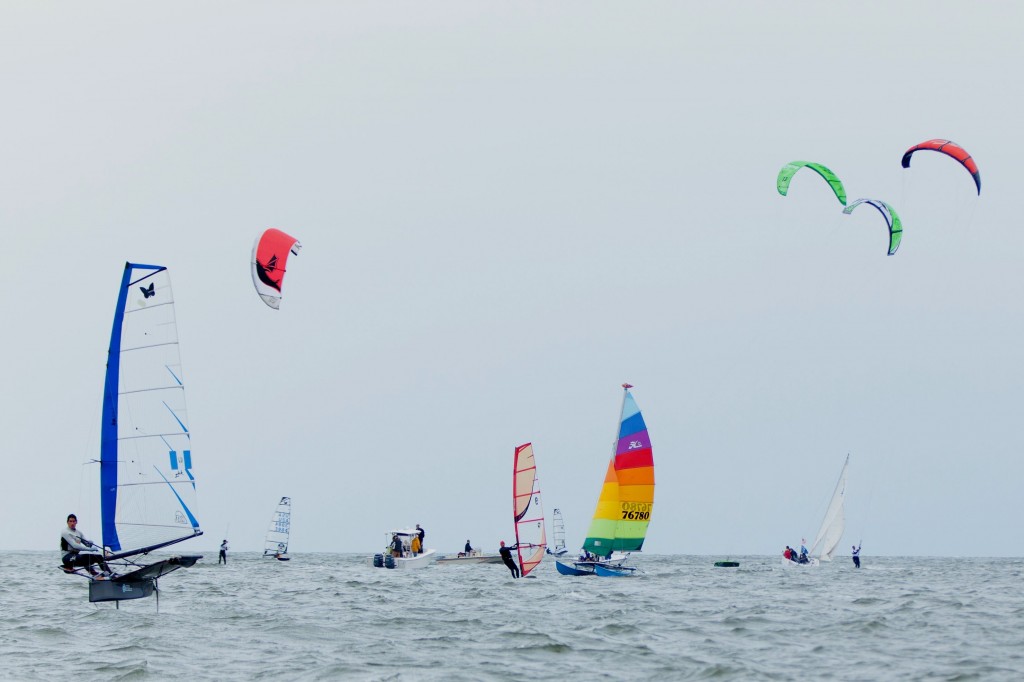 Of course there were obstacles along the way, but you’d be amazed at what a great community there is here around the water. The kind of roadblocks you’d expect for a new race with a new format and extremely high speeds just didn’t exist; the USCG, Department of Natural Resources and local governments all shared the same message when I approached them; “That sounds awesome – go for it!” was their almost unanimous response, and thanks in large part to Sailing Anarchy, the entries rolled in from the moment we announced the race right here on the front page.

Now that it’s finished, I find myself why there aren’t events like this one everywhere; people were so eager to jump up and support a speed sailing event that it blew my mind, and confirmed what I had suspected; the only thing keeping people from doing more of this stuff is a lack of events.  The format – one start, one finish, and a short course – makes the racing incredibly accessible to both competitors and the public, just like the hundreds of easy 5K runs that happen every weekend all over the country.  We had a perfect mix of sailors; from full-family programs on a Hobie 20 to 65 year-olds on sailboards to the Moth World Champion, and everyone had a smile on their face afterwards.  The simple format was a relief to the journalists and spectators we spoke to; people who often struggle to understand the details of more complicated sailing formats

When it comes to gaining the attention of young people and our communities, high performance sailing is where it’s at. This is exactly what kids need to put down the X Box and pick up a mainsheet, and I guarantee you that if you or your club or association wants to make it happen on your harbor, river, lake, or bay, you’ll find it absolutely worth the effort.  And if you are interested in organizing a sprint race in your home town, hit me up through my website and I’ll share any tips I can with you.

A huge thanks to Mr. Clean and Sailing Anarchy for all their help and support; without you guys, this would definitely never have happened.  Also a big thanks to Dave Pritchard at Gill North America for helping us out with competitor vests, and much love to James Island Yacht Club for your support and RC work; please can check out the rest of the sponsors at the Fort2Battery site, and we’ll see you next year!