Back in November we shared a story about an Anarchist jumping into the world of the Moth. Here’s the follow-up. 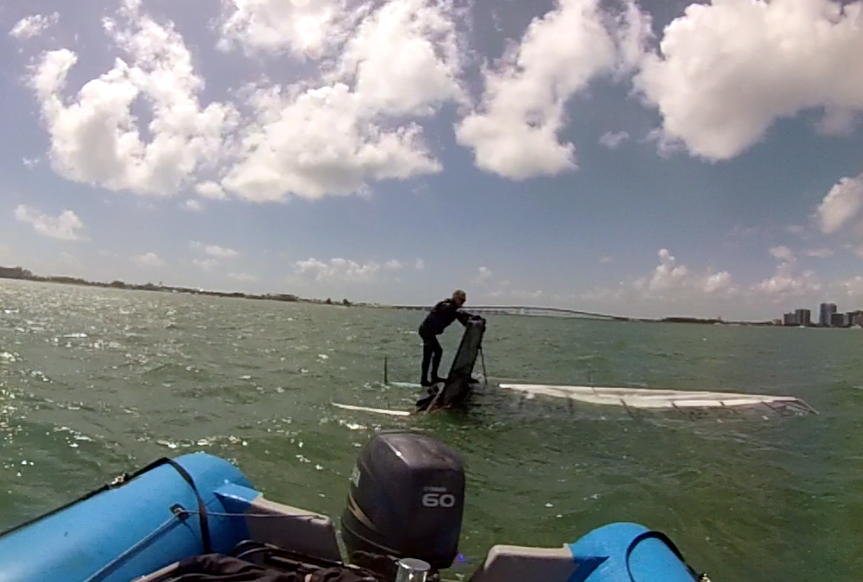 This is the story and adventure of my first three days learning to sail a Moth. What is a Moth? A small, skiff-like dinghy that can rise above and foil over the water. It is an unforgiving and challenging boat that can achieve speeds over 25 knots and has a loyal following of America’s Cup and pro sailors alike. Can a gray haired novice successfully learn to foil and rediscover his youthful energy? There was only one way to find out. Fly to Miami where the fleet hangs out in the winter months and find the best coaches available!

“Come down to Miami and we can get you sailing on a Moth,” replied Ian Andrewes, the manager for the 2013 Red Bull America’s Cup America Youth Sailing Force team. I was one of many thousands who became mesmerized by the sight of America’s Cup 72 foot catamarans flying above the water as much as sailing across the San Francisco bay last summer. The Moth became a one-person training platform for many of the skippers learning to “fly” their boats in a seemingly precarious new way. I couldn’t pass up this opportunity and one hour after my 24 hour call shift ended, was on a Virgin America flight bound for Florida.

A Northeasterly wind whipped across Biscayne Bay as I drove across a bridge bringing me to the Miami Rowing Club. With a setting sun, I arrived just in time as sailing coaches Ian Andrewes and Jonny Goldsberry were stowing gear at day’s end. “It’s pretty windy today from a low pressure system passing through. Hopefully the wind will moderate a bit tomorrow for your first lesson. See you then, “ Ian replied as I departed.

Indeed it was windy the next morning with gusts sending darkened ripples and whitecaps in a chaotic dance across the water. “Steady 22 mph with gusts to 28 mph”, I called out while reading a wind meter app on my smartphone. “Let’s go get lunch at this great Cuban Café and check back after lunch”, Ian suggested. It sounded like a great idea as I nervously eyed the 62-pound narrow carbon fiber hull, bounded by small winged trampoline seats on each side and sharp wing-like foils underneath. In fact the Mach 2 Moth looked more purpose built for flying than floating.

That afternoon the wind subsided a bit and I donned a shorty wet suit, gloves and booties and jumped into a small RIB powerboat that took us out in a more central part of Biscayne Bay. The setting was spectacular as downtown Miami high-rise buildings peered directly at us in the distance. I stepped carefully off the RIB into the cockpit of the Moth and it immediately rolled over, capsizing. The sudden shock of being immersed in the water caught me by surprise but was much warmer than I expected as I hung on to the side of the boat. “Grab the mainsheet and slide back on”, Ian shouted from the RIB. I pulled myself up and grabbed the line attached to the boom, controlling the sail. Suddenly the Moth came to life and I hung on, trying to balance on this knife’s edge. A brief puff of wind filled the sail and over I went falling back into the water on the far side. I tried fruitlessly for the next hour to find some point of equilibrium in this small and unforgiving vessel. Where was the wind coming from? Head up, bear off! The tiller feel is non-existent and doesn’t do anything at slower speeds. Recognizing my complete fatigue, Ian came to my rescue. I barely found the strength to climb back inside the RIB for the ride back to the rowing club. “Don’t be discouraged”, Ian advised. “We all find this boat a real challenge to learn how to sail. I still do after 6 years and as a pro-sailor. That’s what makes it such a rewarding challenge”.

The second day came quickly despite protests from my body. Sore yet undeterred, I was ready to go. “Hey, look at Cooper. He’s up and foiling on his first day!” Cooper was a teammate of Ian’s during the 2013 Red Bull America’s Cup Event. The Moth had risen out of the water and was flying toward the horizon. An hour later I was wet, exhausted and no closer to successfully staying upright and afloat for more than a few moments. 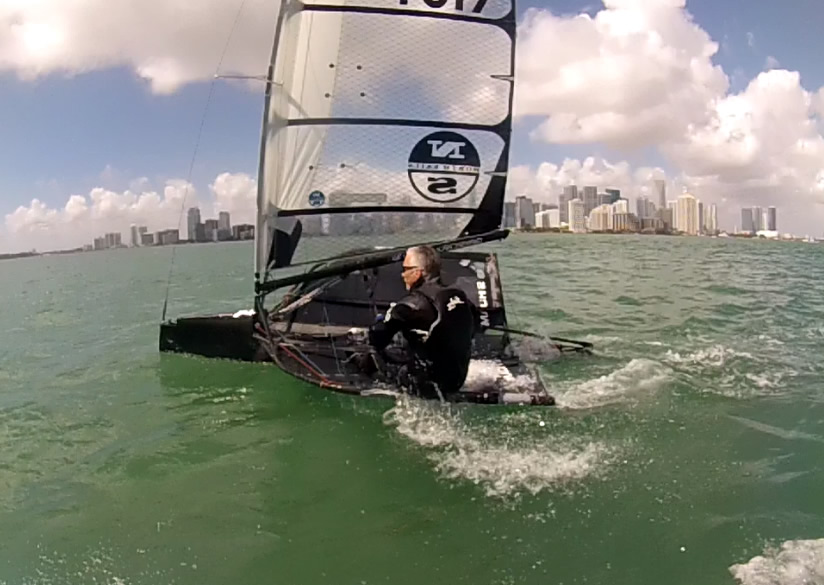 “Use your weight more aggressively and find your balance”, Ian urged me as we began our third day on the water. It was a bright and sunny morning with a brisk, easterly wind. The small, light boat felt like a bucking bronco, flipping over repeatedly when I failed to quickly grab the reins (mainsheet) in time. “Joe, get your feet under the strap. Here comes a puff….ease, ease…good balance”, Ian called as he rode nearby me keeping pace in the small powerboat. I began to move faster as the water rushed by. “You’re foiling! You’re foiling!” I heard a voice behind me yell. Suddenly the sound of rushing water disappeared and I felt myself flying over the water, accelerating at a faster and faster rate. It was as though I was weightless, hurtling through space. And as soon as it began, the boat took an abrupt dive and my brief flight came to an end, crashing, bow first into a wave a meter below. “Good job. Good way to end the day”, Ian exclaimed as I bobbed on the surface of the water with the overturned Moth a few feet away. After three frustrating days, I finally found the proper balance that propelled me over the water for those brief moments.

I left Miami and headed home with much to share with family and friends. It was time to return to my professional life but with a surprisingly renewed energy. Now I have a much deeper understanding and humbled respect for those who sail over the water rather than in it.
Many thanks to coaches Ian Andrewes and Jonny Goldsberry whose patience, encouragement and expertise kept me going. And a special thanks to Paul Kilkenny who made me a believer that gray haired novices can learn to foil and sail a Moth. I started from the bottom and now I’m here. And ready for much more! Check the video!