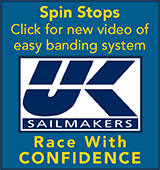 Regardless of which side of the political spectrum you favor— the left-leaning progressives who actually care about our environment, or the  right-wingers who support things like abolishing the EPA under the guise of “less regulation” —you are bound to have a dog in the hunt regarding the new RRS 55. By prohibiting the discharge of trash and other articles overboard, ISAF has deemed that rubber bands and yarn used to stop spinnakers fall under the auspices of a rule 55 no-no.

Rules, environment, whatever; but how the bejezus are sailors supposed to set a spinnaker when it’s blowing dogs off chains? Set a chute safely in stops…or break the rule. Talk about a “rock and hard place” conundrum.

Here’s the thing: today rule 55 no longer controls the spinnaker stopping conversation. “How come” you ask? It turns out that the designers at UK Sailmakers have come-up with a way to stop spinnakers that IS EASIER, FASTER, AND ACTUALLY WORKS BETTER THAN RUBBER BANDS OR WEAK YARN.

SPIN STOPS are quick-release elastic and Velcro tabs stitched onto the luff and tack of spinnakers. As in the past, your bowpeeps below will run the tapes of the sail; but instead of forcing the sail through a funnel or bottomless bucket loaded-up with rubber bands, they can simply and quickly wrap the SPIN STOPS around the sail and connect the Velcro tabs. No muss, no fuss, no remembering to buy more rubber bands or yarn. Quick, easy, and effective.

UK recommends installing SPIN STOPS on the top half of luff and the first third of the tack finding that both asym and symmetrical chutes once again can be set in all manner of wind conditions with safety, ease, and confidence. Once hoisted, simply trim the sheet as in the past and, SHAZAAM, the SPIN STOPS pop open and the spinnaker’s flying. SPIN STOPS are sized to fit different sized spinnakers and are small enough not to impact the sail’s performance once opened.

One of the worst jobs on a racing boat is going below and re-stop a spinnaker in a seaway (funny how the folks who pay for the sails usually don’t get tagged with that duty). However, sailors who have gone below during a blow to re-stop a chute using SPIN STOPS find they are back on the rail in half the time and only wish that SPIN STOPS were developed years ago.

SPIN STOPS makes sense regardless of which side of the proverbial Rules Aisle you sit. Call UK Sailmakers today at 1-800-253-2002 to discuss adding SPIN STOPS on your new spinnaker or retrofitting SPIN STOPS onto an existing one. To see UK’s SPIN STOP video, click here.