Ronnie Simpson continues with the bad luck, as well as with the perseverance that keeps seeing him through.  Another great story from our West Coast (and now world) wanderer.  As always, you can follow Ronnie’s adventures on his page at Open Blue Horizon, and we encourage everyone who’s enjoyed Ronnie’s great writing and enthusiasm for the sport over the past few years to send him a few shekels via Paypal – just go here and type in [email protected] as the recipient.  Dig deep, please! 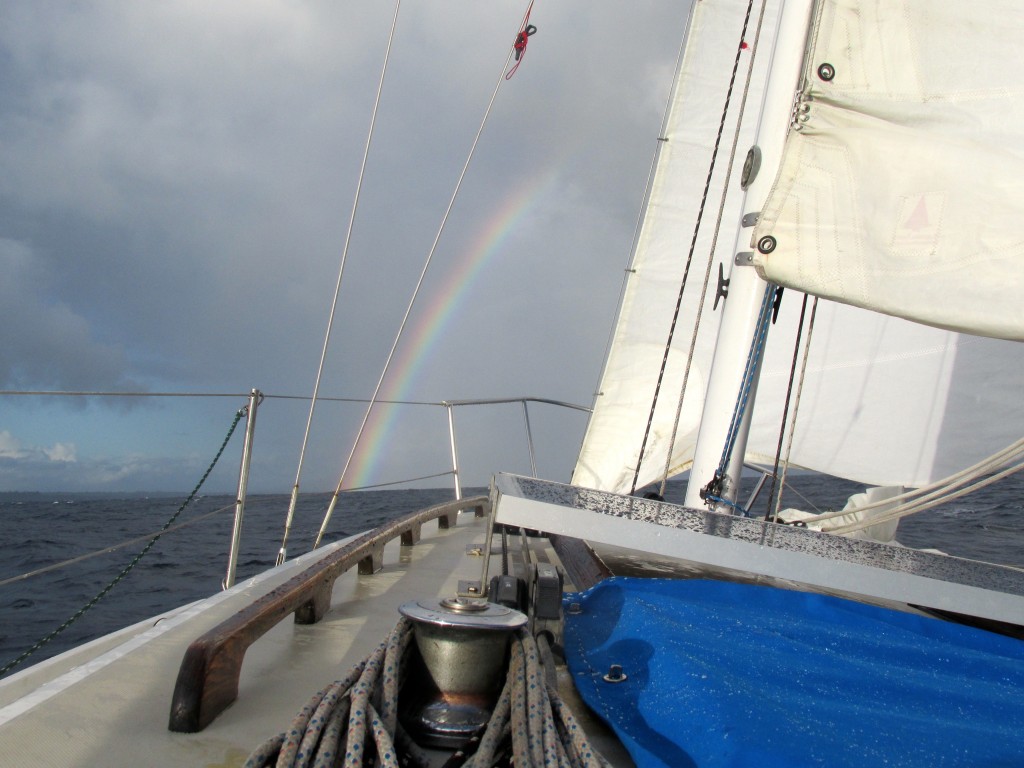 It’s the thing that every sailor who sails engineless fears most; dismasting or other major problem with a lee shore, big swell running and breeze-on conditions. Unfortunately, that’s exactly the situation that I found myself in yesterday off of Maui’s east side while sailing my cruising boat; the Cal 2-27 MONGO.

While en route from the West coast to Australia, MONGO and I had just completed a picture-perfect early season passage from San Diego to Hilo, Hawai’i and were now cruising downwind through the islands looking for surf. After three days in Hilo, MONGO and I charged the Alenuihaha Channel from Hawai’i to Maui; known as the most treacherous in the Hawaiian Island chain. The little boat reveled in the big breeze and big waves of Hawai’i, averaging 7 knots VMG for hours, deep-reefed and all. After a brief 22-hour passage, MONGO sailed into Kahului Harbor and dropped a hook.

A strong Pacific high and stalled upper atmosphere low threatened the islands with reinforced trade winds, heavy rain and a lot of swell. Anchored in Kahului, I sought the relative safety of a mooring ball on the leeward side of the island (in Lahaina) as opposed to anchoring on the windward side with a beach park serving as a lee shore. I would sail to Lahaina in the morning, hoping to hit the Pailolo Channel in between Maui and Moloka’i in the morning before the trades built to their daily max.

Up came the anchor and within minutes, MONGO was clearing Kahului’s breakwater and heading north up the coast of Maui under single-reefed main. Taking the scenic route, I stayed relatively close in to shore, watching the waves break on the rocky beach, sending white spray high into the air. Having become an avid surfer in the past two years, I am fascinated by viewing different bits of swell-exposed coastline. Engaging my self-steering wind vane “Francois” (named after VG winner Francois Gabart), I made a cup of coffee and then came back on deck to enjoy my private boat tour of Maui and another tropical morning.

With a coffee in one hand and the tiller in the other, I watched on in horror as the mast broke below the spreaders and immediately came crashing down. Why it occurred, I do not know, but all indicators lead to the starboard lower shroud’s toggle failing on my 4-month old standing rigging. The entire dismasting happened in the blink of an eye and was as unexpected as it was brief. Having now put the boat through its paces for 4,000 miles of coastal and offshore cruising, 2 haul-outs and a thorough re-fit that included new standing rigging, new rudder and all of the safety gear amongst many others boat bits, I felt that MONGO was battle tested, well maintained and imminently sea worthy. Why did the mast fail?… I was in disbelief at what had happened. 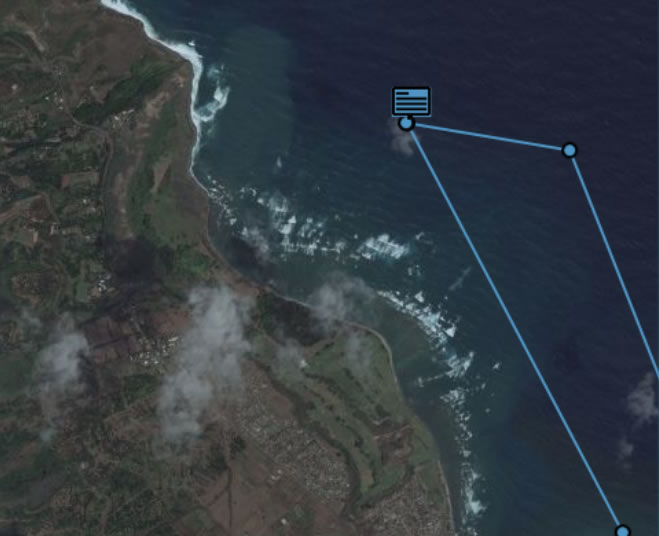 Close in to a lee shore with pounding surf and a steady 18-20 knot onshore trade wind blowing, I had no time to ponder what had failed or why. It simply had. I looked at the rig, saw that we weren’t holed and called “mayday” on VHF 16. I then grabbed the hand held VHF and immediately ran to the bow to begin trying to anchor my engineless, dismasted boat. While anchoring, I continued to confer with the Coast Guard on the radio. I dropped the rig in about 80-90 feet of water, unsuccessfully attempted to anchor in 62 feet of water and finally got the hook down in 50 feet of water. Now to gather the rig back on board.

With 9-11 foot pounding surf rolling under the boat and one wave breaking over the bow, MONGO rode the seas like a bucking bronco making the task of recovering the rig exponentially harder, while also inducing a serious rig-on-hull thrashing. I used a couple of halyards led to winches to begin winching the rig back up next to the boat. With the spar full of water and the main sail impeding my efforts, I struggled to get the rig back on board. An hour had passed since the dismasting. My anchor had held, the Coast Guard was on the scene and the rig was secured to the side of the boat. Had I had more time, perhaps another hour, I believe I could have gotten the rig back on board. But I didn’t. The Coast Guard was circling a disabled sailboat that was anchored just outside of big surf. They were ready to get the rescue under way.

With the rig secured to the side of the boat, the Coasties threw over a heaving line with two tow lines on its end. I caught the line and rigged up for tow. The USCG wanted me to cut my anchor rode, but I pleaded for them to help me retrieve my anchor. I was just dismasted; losing my primary ground tackle seemed unnecessary. The Coast Guard indulged me and powered forward so that I could retrieve the anchor and chain. We towed east to get into deeper water and then south towards the harbor. Halfway back to Kahului Harbor, a wave broke into the side of the boat and began ripping the mast away. The bottom section, which was pointed at the sky, swung precariously around the cockpit, missing my head by inches and ripping the front of the stern pulpit off. The top section of the mast began ripping stanchions out of the deck as the bottom section began to threaten not only myself, but my wind vane Francois as well. The port side of the boat was oil-canning and flexing horribly and there were already two holes in the boat by the hull-deck joint. I feared being holed worse, so I grabbed a rigging knife, cut the halyards and jettisoned the entire rig and the main sail. The man had been kicked while he was down.

With no rig over the side, we could tow at 5 knots, the helm was neutral and MONGO felt like a boat again. I cracked a luke warm Coors Light. It was the first thing to go right all morning. Back into Kahului Harbor, we towed up to the commercial wharf next to the harbor’s lone Pilot Boat and tied up. I was boarded by the Coasties, cleared and then we moved the boat to its own side-tie. My boat had been dismasted, but all’s well that ends well and we were back in port safely with minimal injury to myself, and despite MONGO getting pretty trashed, she’s salvageable. This hectic morning was finally starting to normalize. I began cleaning up the boat in an effort to restore order. An hour and a half later, an 8.2 earthquake hit Chile. Tsunami alerts were issued and the port began buzzing with activity. I was informed that the harbor closed at 6 pm and that if the tsunami posed a real threat, the area would be evacuated. The man was getting kicked again while he was down!

Side-tied to the leeward side of the wharf, I inflated my kayak (my dinghy) and rowed two anchors, chain and rode out to leeward about 40 feet. I then tied two old halyards to massive tires that acted as fenders on the wharf. I eased off on the halyards and took up slack on the anchor rode. MONGO was now secured at four corners some twelve feet to leeward of the wharf and 20 feet to windward of two anchors. Theoretically, she could rise up and down ten feet if need be. Whether or not she would push her keel through the hull remained uncertain. “Be brave, MONGO”, I whispered to the boat as I left. I took one last look and then pushed off with my skate board headed for the nearest bus stop.

I grabbed a bus and went to Lahaina; in part to get away from the boat, in part to head for the hills in light of a potential tsunami and in part to begin sorting out the logistics of what will come next. The tsunami never materialized in Hawai’i, much to my relief. A million thoughts ran through my mind as I tried to evaluate the situation and come up with a plan to move forward. I thought of the one thing that I didn’t have on board that I needed; a hacksaw. I realized I didn’t have one on board halfway between Cali and Hawai’i and added it to my list of things to buy in Honolulu. Not having this saw nearly caused me to lose the boat as the mast was pinned to the port side at a precarious angle and threatened to be holed more severely than she was, as I couldn’t remove the port lower shroud. I eventually managed to break the turnbuckle, freeing the rig. 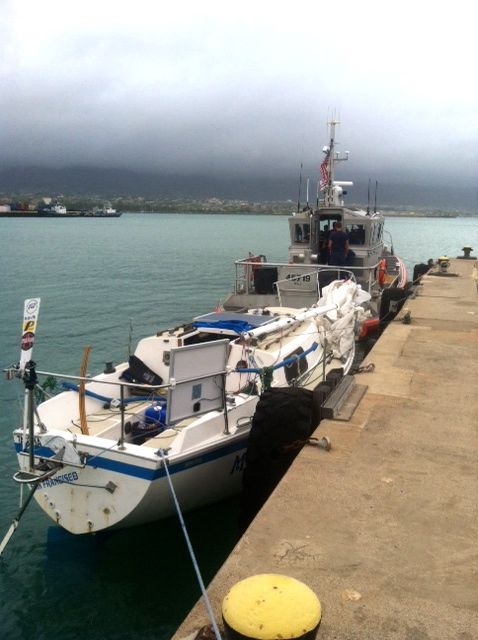 I thought of the irony of sailing 4,000 miles (originating in Tacoma, WA) on my boat that I purchased for $4,000 only to lose the rig in 18 knots of breeze with only a reefed main up, less than a mile from land. I also thought of the irony that my friend Ruben and I left Kahului in 2012 and rescued the abandoned Bela Bartok and sailed her to Honolulu, only to be rescued myself two years later and towed into the very same harbor we had left from; Kahului Harbor, Maui. I thought of the fact that I had lost the rig on April Fool’s Day. Murphy was clearly a sailor although his sense of humor fell on deaf ears this time.

After much thought and reflection, I realize that MONGO and I were dealt a serious blow and my journey to Australia has run into its first major roadblock. Rather than throwing in the towel and abandoning the voyage, my resolve has been solidified. I will continue to sail my boat to more land falls, both near and far.

First things first, I will source an outboard motor bracket and bolt on a borrowed 4-horse outboard from the Alameda-based Valiant 32 Horizon. I then plan to head to Home Depot to purchase wood, screws and glue to build a temporary box-section mast and then set sail for Honolulu next week. Once in Honolulu, I will re-build. I will re-rig and continue on my journey, stronger than before.  Hopefully you’ll follow along, and of course if you want to send any mail, I’d love to hear from you at [email protected]

I also want to extend my sincerest gratitude to the US Coast Guard out of Ma’alea Bay, Maui, the Kahului harbor masters, Zach Streitz of s/v Horizon, my friend Leah whose couch I crashed on last night, and everyone else that has sent me messages of support. Let the next phase of this journey begin.