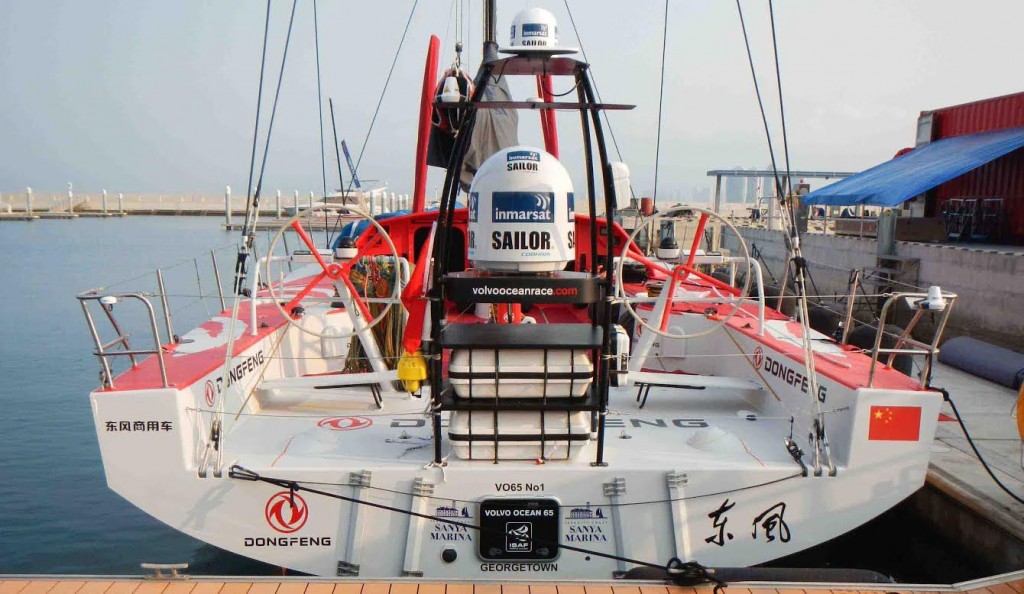 A close look at the Chinese VO65 Dongfeng, thanks to Shanghai Sailor

I know many words have been written already about the VO65 but I was lucky enough to spend a week with Dongfeng Race Team at their training base at Serenity Marina in Sanya, China.Although 5 feet shorter than the 70 and with less righting moment (referred to as tippy by at least one who has sailed her) the boat has already proven herself with a 500+ mile day on a delivery trip It has to be remembered that – in the words of the VOR CEO Knut Frostad when referring to the breakages of the last edition of the race “ thank god we had some drama…     …but masts shouldn’t fall down” so this boat is engineered to get round the course.

The oldest cliché in sport is perhaps that ‘to finish first, first you have to finish’ and that applies to both boat AND crew and some of those principles are evident in the design of the boat.

Starting at the back, and with apologies to Queen, she is a Fat Bottomed Girl  with powerful (and I am not being rude) buttock lines running to the stern. The rather slab sides sit on top of a chine that runs all the way to the bow  and she does appear to have a relatively narrow static waterline forward.

Looking round the cockpit there are several differences from her predecessor. The cockpit sides appear subtly higher than on many of the previous version boats but looking forward the most obvious change is the height and size of the coachroof designed to throw the water off to the sides to try and prevent the swimming pool effect that was so evident with the previous generation Volvo racers.

Above the pit area is a little blister which doesn’t only afford the pit man a bit more protection but also houses – or will house – a specially developed camera that will literally be right in the face of the crew as they go about their duties for it must never be forgotten that the VOR is a professional/commercial event and media coverage, even from the depths of the ocean is vital to ensure the sponsors Return on Investment (ROI). Nothing cynical in this statement, without the skills of the sports marketers the likes of the Volvo Ocean Race – and many other events in the sailing world – just wouldn’t happen. 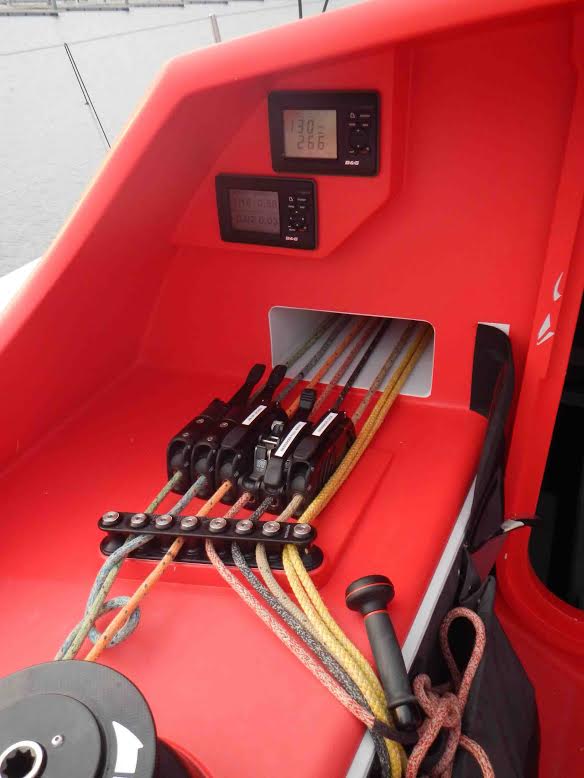 The pit itself is split into 3 areas each with their own winch, central, port & starboard with so many control lines it would keep Rick Wakeman happy and in the shot of the port winch you can see the rather simple solution to SCA’s criticism that water rushes down the line tunnels and disappears straight down below to the cabin.  The addition of simple piece of sailcloth velcro’d in position solves the problem.

Moving back aft from the pit there are 3 grinders which, ladies team apart, are unlikely to see them all used at once other than the in-port races. This girl does not lack power. These couple to the winches of which there are just 8 on board. 3 for the pit area,  2 primaries, the main sheet – which is fed through a nicely engineered and molded guard which still allows a degree of access should the line twist(8) – and of course the all important runners to keep the mast pointing skywards.

The wheels are protected by almost agricultural looking crash guards/grab rails  which if the coachroof does its job as intended should just be something to hang on to but such is the attention to safety which takes us aft to the communications “tower” (10) enabling not only race communications but the by now well known ability to provide images – as they happen – from anywhere on the ocean. This structure also houses is a reverse angle camera with light and the (hopefully) never to be opened liferafts.

Moving forward to the mast which in the shot has yet to have the radar fitted, you can see the multi-configurations that can be used on the two sets of running backstays each with a set of deflectors to keep the stick in the air. The two appendages on the lower spreaders are 2 more cameras that can be panned and tilted which along with the others (including the one in the hands of the On Board Reporter) (OBR) will bring almost superbowl type coverage to the boat from even the deepest ocean.

Unusually for a race boat of the this size, the mast is deck stepped keeping the boat much drier down below as all the halyards exit above the deck,  into the tunnels and down to the pit. Also should a rig tumble down reducing the chance of damaging the integrity of the deck should such an event occur.

Moving onto the foredeck the first thing that strikes you are the two – what look almost like girders running the length of the foredeck.

I understand they do help the strength of the structure and also give a very secure foothold to the bow and mid bow people on a heeled boat but they primarily house the likes of the tack lines from the bowsprit taking away one more thing for someone to trip over on a dark Southern Ocean (or any ocean) night. Hydronamically, (and I am guessing here) I would imagine they also start the process of directing water away from – ultimately – the crew in the cockpit. 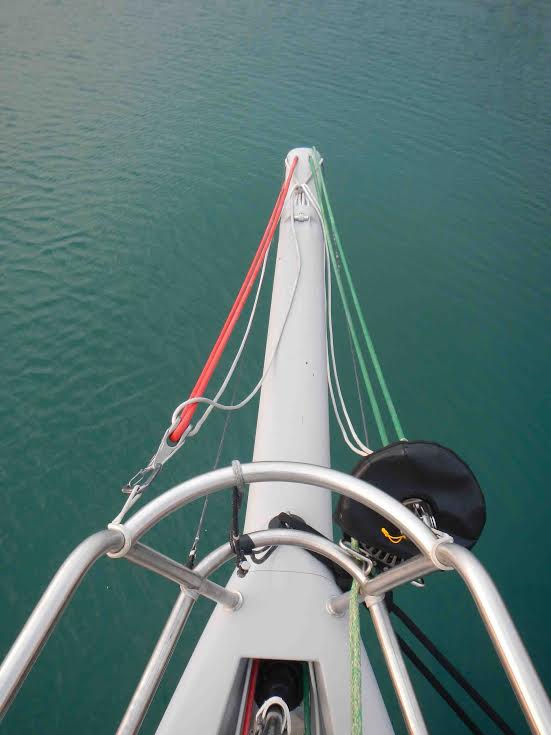 That brings us to a busy bowsprit  and while I must admit I wouldn’t like to have to climb over that central pulpit bar on a dark night if I had to get out onto the bowsprit but that is certainly preferable to falling through a space if there wasn’t a bar there and if the designed reliability of these boats is as reported (and intended) it is not a trip a bowman is likely to have to make.

Moving down below, the unpainted carbon makes her very dark with all the accommodation  aft of the main bulkhead. All there appears to be is the spare rudder clamped to a beam. But turn the corner and there lies the beautiful clearcoat carbon head (if ever a head could be beautiful)  and it proves the keel isn’t the only thing that cants on a VO65. At least there is somewhere you can be comfortable on one of these things.

Moving back into the main area – saloon I suppose – there is a rudimentary galley but when the required catering is just as rudimentary, more than adequate for the job. One surprising thing missing is virtually any form of grab handle or even rope and as more than one person has proved it is more than possible to fall all the way from the high side while down below. This has already been raised with VOR and when I was on the boat such a modification was awaiting approval.

Moving aft, (and thanks to VOR for this shot) is the nav station and OBR hangout where the motion of the boat should be gentler and although there are some nice touches like the whole nav table that effectively tacks by swiveling round. In this shot you can just see the luxury padded chair (not) for the OBR when they are busy editing together the latest images that will be bounced off the satellite using  the dome a few feet above his head. Apparently being part of the brains trust doesn’t bring much in the way of comforts on a VO65. 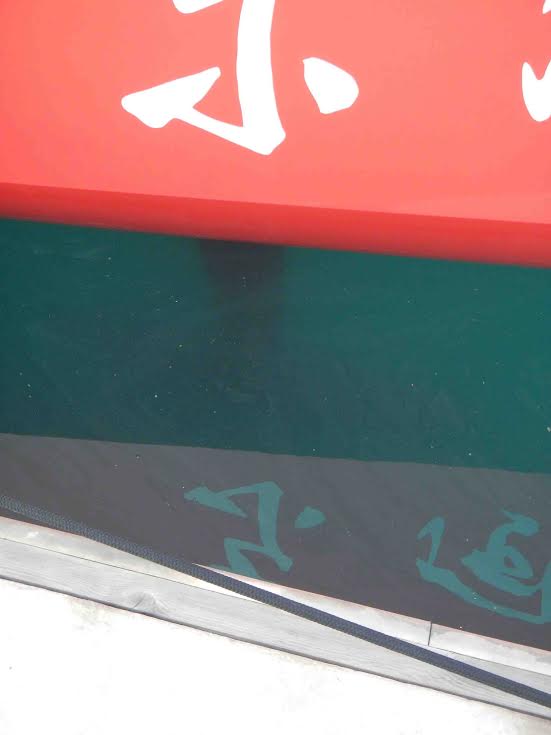 One final element is the 4.7m deep canting keel, the keelbox for which you can see at the bottom of the picture of the galley above. Sanya Serenity marina not quite clear enough to see the whole keel but the top of the bulb is just visible.

So that’s the VO65 inside and out- top to bottom. A brute rather than beautiful perhaps but she appears extremely well thought out and well up to the task ahead.

About the time that you are reading this the guys from Dongfeng Race Team will be on their way to Auckland, perhaps the toughest and certainly longest test yet of this new design – what feedback I get, I hope to share.

I would just like to thank skipper Charles and Team Director Bruno for letting me wander (and wonder) at will around and over their lovely lady and I would wish them luck in the challenges ahead.

These are potentially greater than some other teams with Chinese sailor selection to be completed – these guys are good but lack deep ocean experience which the Auckland run will start to address; getting the crew to a required level of communication – not necessarily easy with French, English and Chinese being the natural team members’ languages but I am sure they will succeed, there is a determination about the team.

On the other side of the coin, the western sailors – and I await the green light from the team to reveal who they are – are all “high mileage” ocean racers with more than their fair share of ocean crossings and circumnavigations to their credit and with comments already having been made that these boats are big planning dinghies on steroids who’s to say that being a dinghy sailor on one of these is nothing but an advantage rather than the other way round.

Would I want a go on one of these? Well let me tell you – you wouldn’t have to ask twice! – Shanghai Sailor